Do kid-friendly historical sites even exist?

Yes they do! Having children does not mean you are doomed to a life of no travel, or boring package holidays (although all inclusive meals and kids clubs do have their appeal). Historical travel with your boisterous kids in tow is absolutely possible.

My husband and I have always been cultural and historical travellers, from cooking classes in Vietnam, to camping in the Thar desert in India; from historical walks around Jerusalem to hiking the Great Wall of China. We traveled to learn, not to relax, to soak up culture and history not to work on our tans. When our boys came along we realized that we’d have to adjust our expectations when it came to traveling, and that sometimes a relaxing beach holiday is necessary, but we were also determined not to succumb to bland holidays devoid of the things we love.

I’m the first to agree there is nothing worse than dragging a tired, bored child around a historical site you find fascinating. It’s a recipe for disaster. But it doesn’t have to be that way! After eight years of traveling with our children, I’ve discovered what works, along with some wonderful historical sites in Europe that kids will love…if you lay the groundwork first.

I’ll let you in on a secret…

History is just about telling stories. And what child doesn’t love a good story? All it takes is some thoughtful preparation on your part, and some creative retelling to really capture their imaginations.

Things to do include:

12 European Historical Sites That Will Capture Your Child’s Imagination

The following destinations are easy to get to, child-friendly because they’re all outdoors, and really easy to research and build stories around (think dungeons, destruction and exciting views) and promise to capture your child’s imagination! 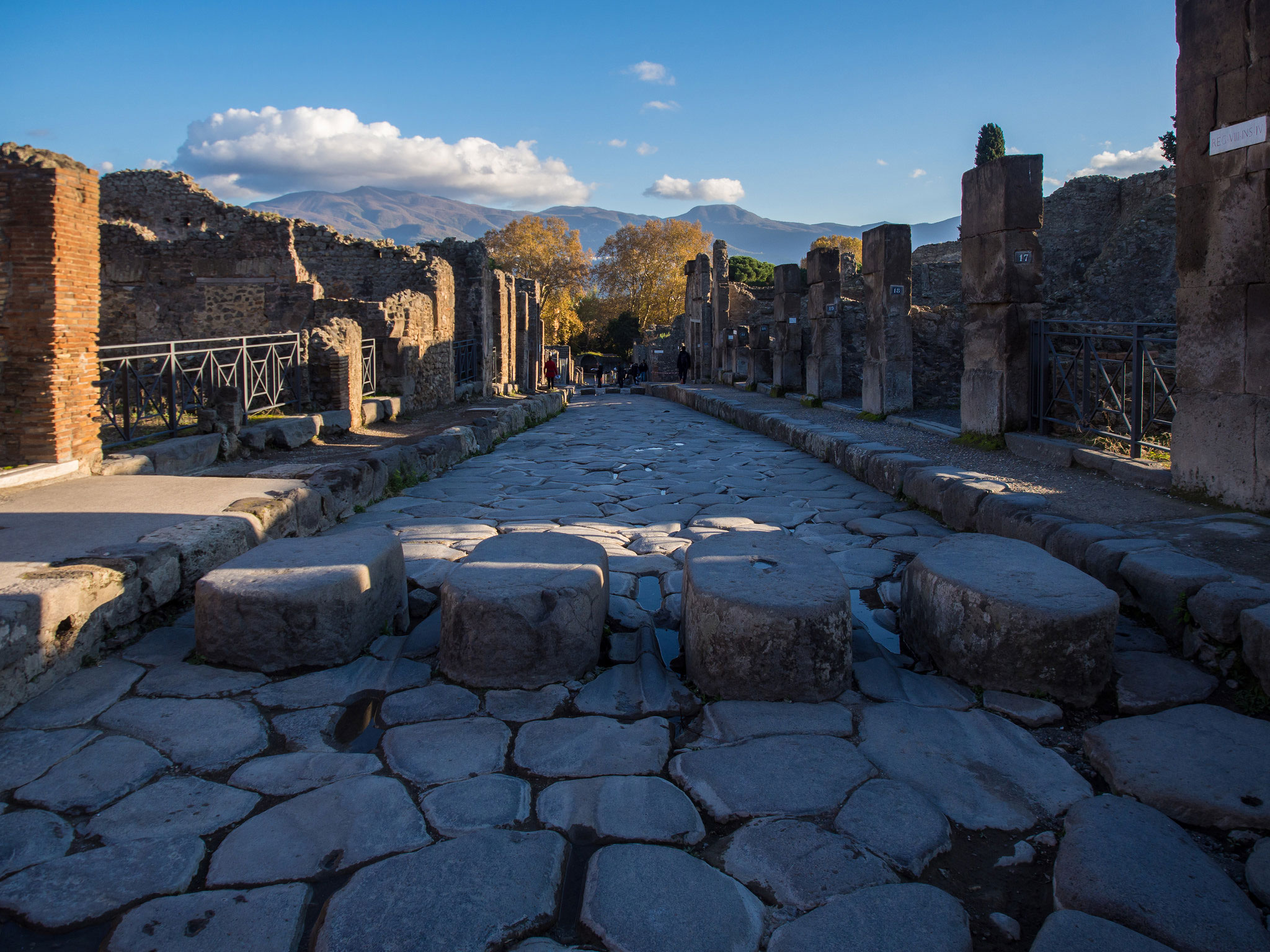 Step back in time at Pompeii, Europe’s most well preserved ancient town (although Ephesus in Turkey is equally well preserved in my opinion). It doesn’t take much to imagine what life was like here, perfect for introducing your kids to a historical site.

Getting from Naples to Pompeii is fun too if you take the Circumvesuviana train from Napoli Centrale station. The train stops at Scavi which a short walk to the entrance of the ruins. Pompeii has everything to offer kids: a looming volcano, a natural disaster, well preserved human remains (fascinating), ancient Roman toilets (a huge draw card) and other fascinating details such as the stepping stones in the streets so that the ancient residents did not have to step in the effluvia that flowed freely beneath their feet. There are lots of green areas too for enthusiastic children to run around. 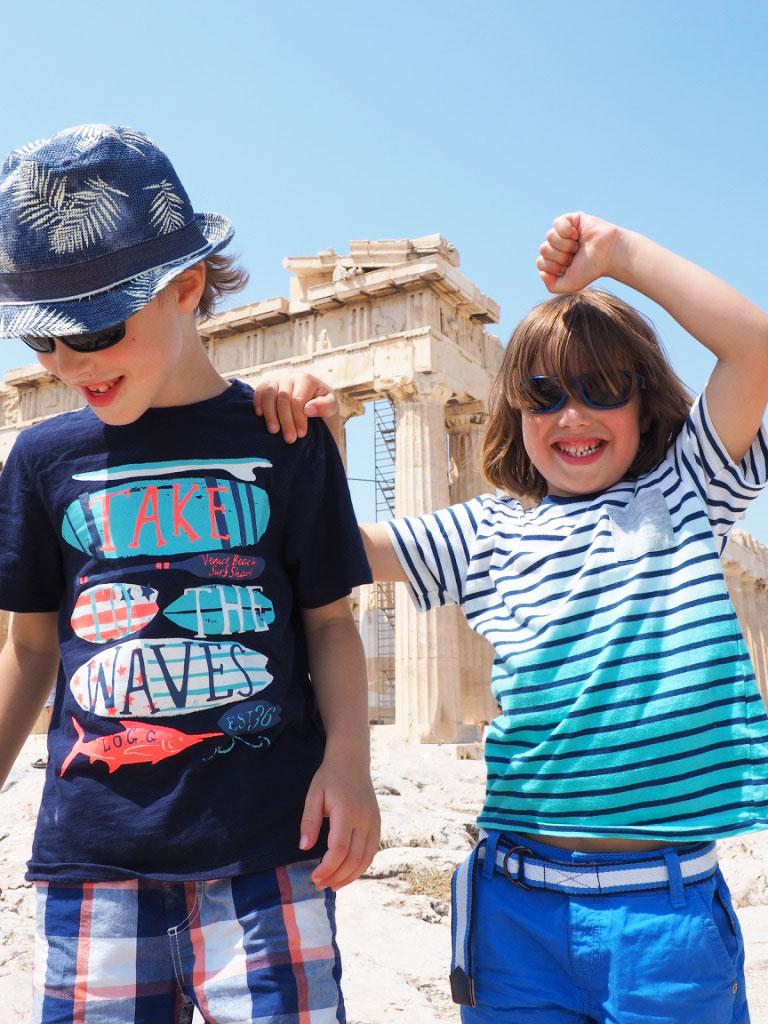 The Acropolis is a great place to take kids. The walk up is long and meandering with a sweeping view of Athens below, and is a perfect opportunity to build up the anticipation of seeing the magnificent Parthenon at the top. What captures my kids’ imaginations is the sheer age of the Parthenon, their minds boggle at something that is 2500 years old: “Mama, was Jesus even alive then?” Take the opportunity to tell them about the Persian Wars, and introduce some easy Greek myths to fire up their imaginations. Let your kids clamber over the chalky rocks that lie scattered around, but don’t let them pick up any stones because they’ll be told off by the guards!

On your way back down, stop for a delicious slush puppy to quench your thirst. They’re so good!

The Tower of London 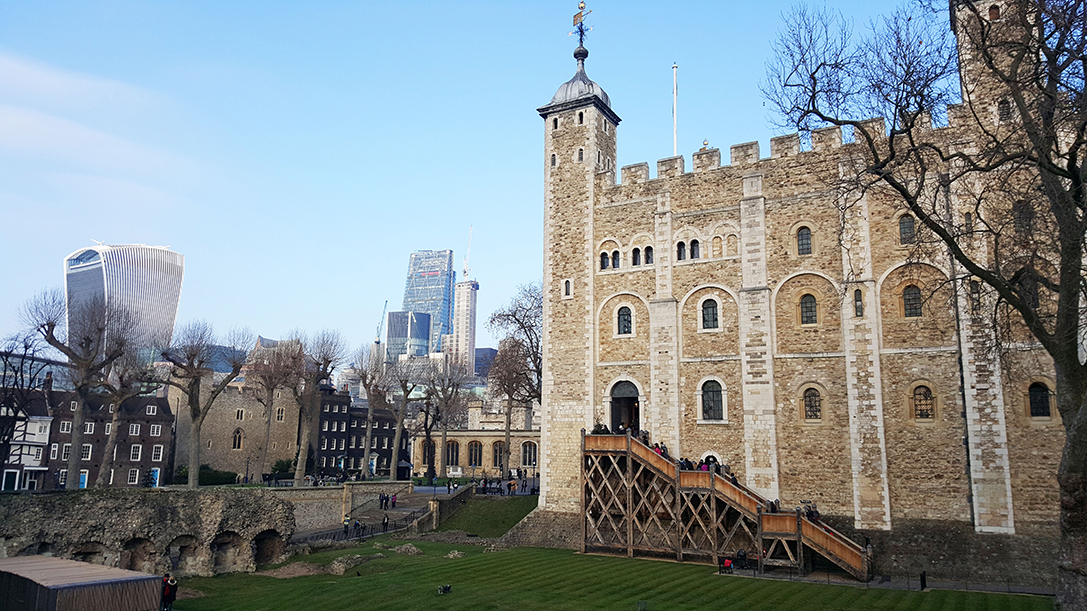 Dungeons, torture, be-headings, a traitors gate, full costume re-enactments, and the Crown Jewels (with the Cullinan diamond from South Africa), what more could a child need! Walk along the ramparts for picture perfect views of Tower Bridge, another London landmark around which you can tell tales of plague, fire and olden day magic! Visit here for more info and tickets. 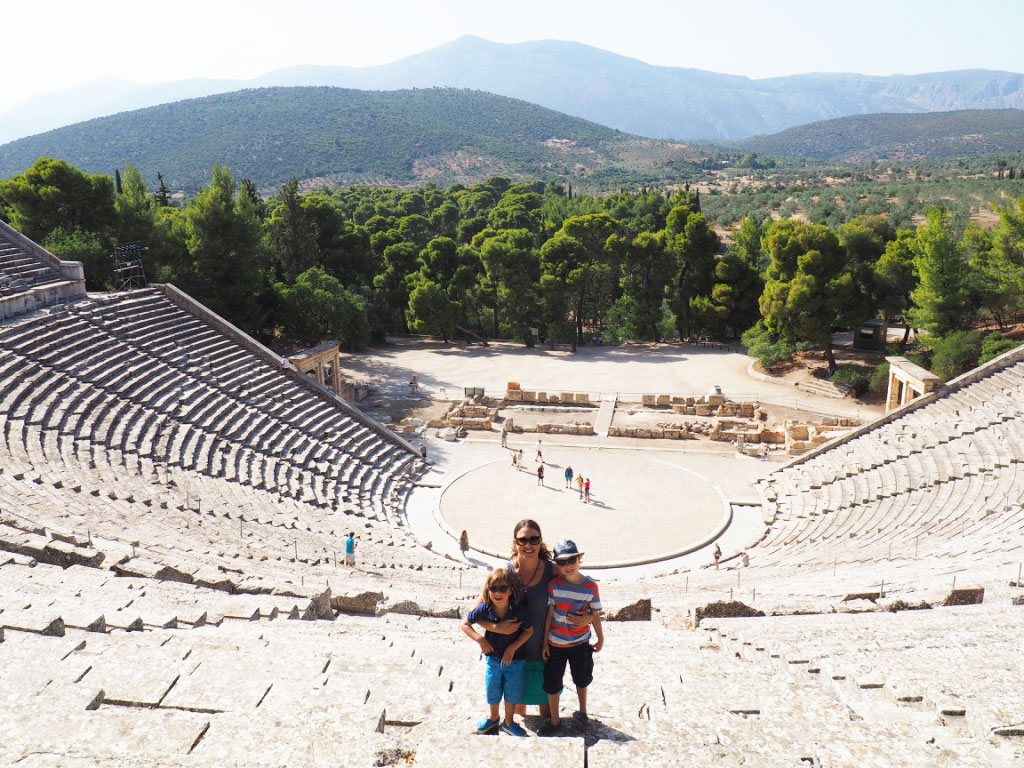 Epidaurus is an ancient town in the Saronic Gulf in Greece. It is the location of the Asclepion, a place of healing and medicine in ancient Greek times. The amphitheater was built to entertain convalescing patients and their families, and is the best preserved amphitheater in Greece. There is something very special about standing in the spot where a play from Sophocles debuted in 440BC! My boys chose to sing Michael Jackson’s Bad, which garnered more applause than the man who recited a passage from Oedipus Rex in a lilting Irish accent.

The ruins of the Asclepion lie just adjacent to the amphitheater and are well worth a walk around. There are the remains of the ancient hospital, a circus maximus where patients took their exercise, and some graceful temple columns. It’s open and quiet, perfect for exploring!

Getting to Epidaurus requires a touch more effort, but it is worth it. Transfers by bus from Athens take about two hours. Now, as a well-traveled mother of two kids, the thought of a two hour bus ride with them is enough to make me want to shred my passport. Thankfully you can hire a car in Athens and drive leisurely along the coast, stopping at little villages along the way. I’d also recommend staying over night in Nafplio instead of attempting the drive back to Athens after a day at the ruins. It’s an impossibly charming town with a fort to explore if you have the time.

Arguably the most iconic historical site in Europe (debatable, but it gets my vote) the Colosseum is a great place to introduce your kids to Roman history. Stories about gladiators, blood-thirsty emperors, lions, elephants, leopards, and ancient naval re-enactments will fill your child’s imagination and bring them within a whisper of the world’s greatest empire. Tag on a visit to the Roman Forum just across the road and spin a captivating yarn about Julius Caesar (et tu Brute?), and throw in some Anthony and Cleopatra drama for good measure. The wonderful thing about visiting Roman sites around Europe is that if you dig deep enough you realize many of them are linked in some way which forms an interesting continuum and deeper context for children (and adults) piecing the history together. 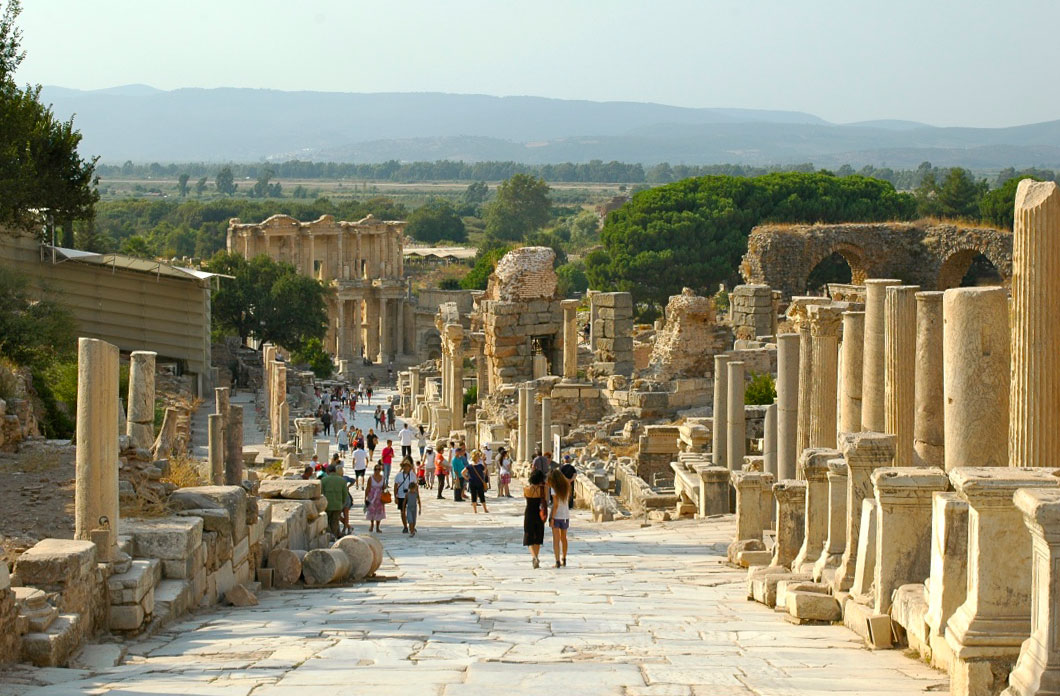 Whilst not technically in Europe, Turkey deserves to be included simply because its wealth of historical sites, combined with its culture and natural beauty. I adore Ephesus because it’s preservation is on a par with Pompeii (its amphitheater is in a better state), yet its history is more well known, thanks in part to St Paul, Celsus and the town’s strategic location as a bustling port in ancient times (The port of Ephesus has silted up over the years and Ephesus is now about 6 miles inland from the coast). It is very child friendly too as there are many aspects to explore where the kids can run around.

Ephesus is accessible from Izmir or Kusadasi, both rather bland, over-developed towns on the coast of Turkey. We drove through Turkey from Istanbul, stopping along the way. We chose to stay in Selçuk which is a small town very close to Ephesus. More information about logistics can be found here. 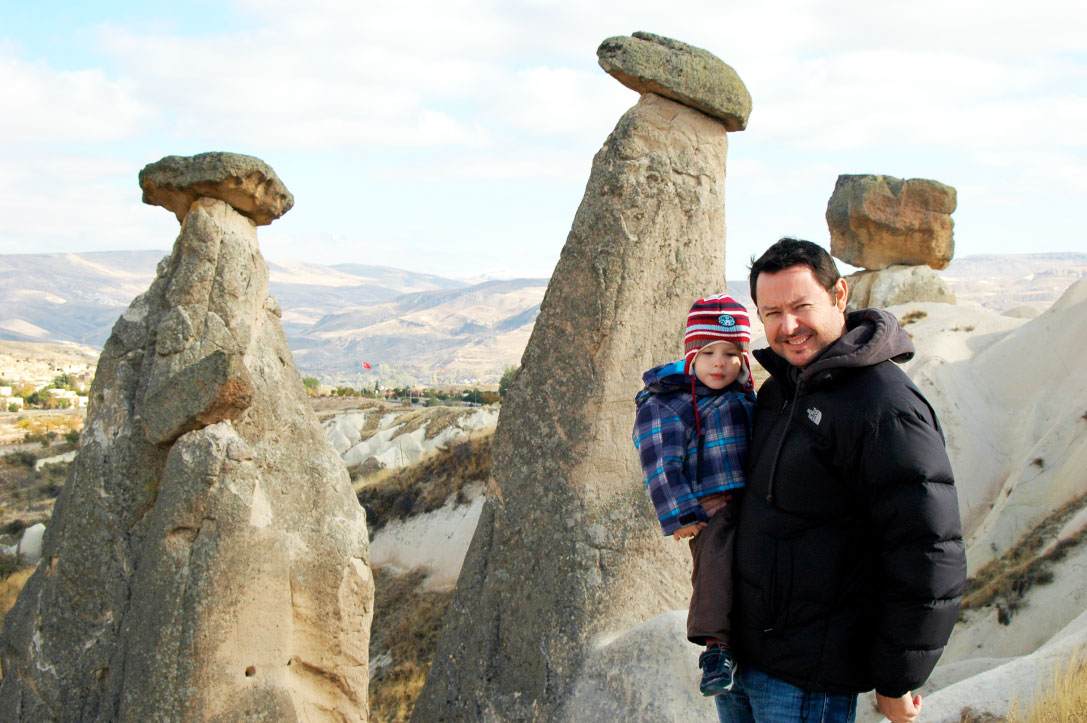 Capadoccia has excitement, other-worldly sights and history all rolled into one. There are plenty of walking paths, meandering through the rock formations, which are interesting to explore. Then there are the caves, hewn into the rocks that served as houses and churches for early Christians fleeing persecution in Rome and elsewhere in the Empire (which incidentally ties in beautifully with Christians persecuted in the Colosseum). The frescoes in these cave churches are beautiful.

Be sure to stay in one of the many luxurious cave hotels in Goreme or Urgup for a really special experience that the kids will love!

Most visitors enjoy a hot air balloon ride, please be aware that there are age restrictions for children (must be over 3 years old), and be sure only to use a reputable company as accidents have been known to happen.

Turkey has so many historical sites, I’ve grouped these three together. The Blue Mosque, Hagia Sophia and Basilica Cistern form a sort of triangle around a park with a fountain. They are all within easy walking distance from each other and each hold their own appeal, from history and architecture to impressive feats of ancient engineering. When we lived in Istanbul we used to hang out all day in Sultanahmet, visiting the three sites, playing in the park, and eating at one of the many restaurants offering tasty Turkish food and treats. Istanbul is very child friendly (although less stroller friendly) and children of all ages are welcomed and treated with patience and kindness.

Back to London, this time to Greenwich and the National Maritime Museum. The highlight here is the Cutty Sark, and 19th century tea trading ship that sailed to the Far East as part of the East India Company. The ship is brilliantly preserved and has been transformed into an informative and interactive museum. Kids can do a treasure hunt, getting stamps along the way, and the Captain’s chambers and other rooms have been recreated to show how the ship would have looked in its heyday. Brush off your best pirate stories and set sail for more exotic climes!

The National Maritime Museum, situated a short walk away is also worth a visit. It has a wonderful play area where the kids can play maritime-themed games and dress up as a ship’s captain. On the floor of the upper level is a giant world map where the kids can hop gleefully from South Africa to Argentina, from Gibraltar to the Arctic. The only hopping I did was into the coffee shop. Perfect. 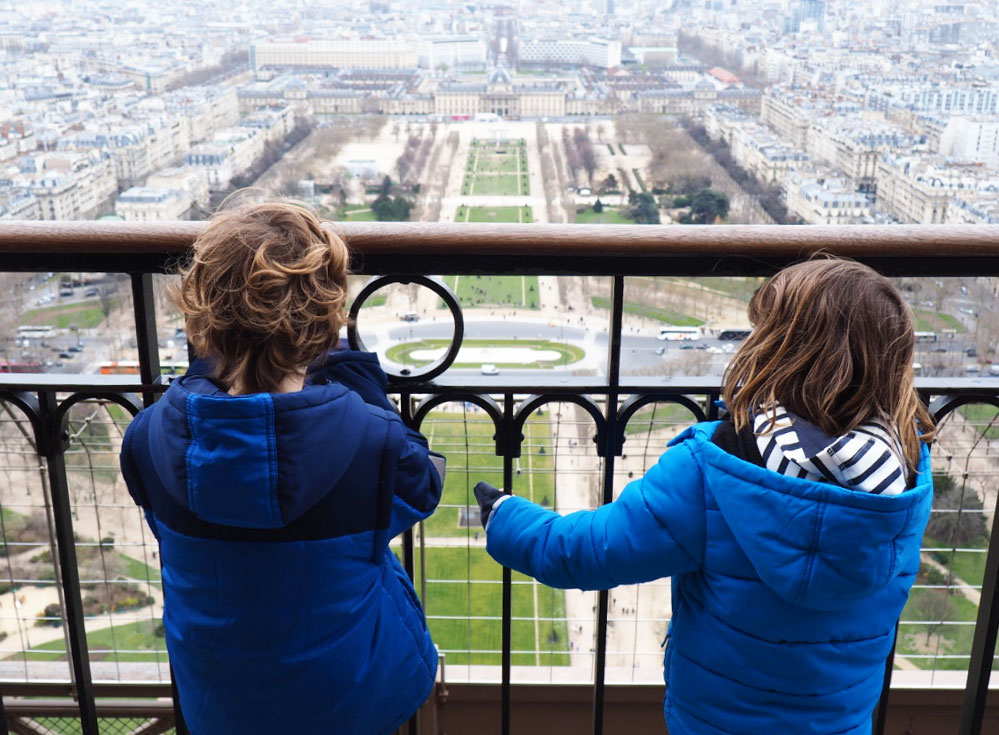 The Eiffel Tower may not be a historical site in the same way that others on this list are, but it’s such an iconic world landmark, and actually has a really fascinating history. Did you know that it was built for the centennial of the French Revolution? Off with their heads! Madame Guillotine. Some great stories there. The Eiffel Tower has been painted in various colors throughout it’s history. It was only supposed to be a temporary structure. And if your kids remain unmoved by those details, climb up the 1710 steps to the top! Most (lazy) people take the lift, but it is much more fun to walk up and down chatting as you go! “Boys, boys! We are now as tall as 6 blue whales lying on top of each other!” “Mama, if we fall from here will we be as flat as a pancake?” My four year old climbed up and down no problem.

There are SO many fascinating historical sites throughout Europe (Venice, Sicily, Germany, Croatia) and we have been to many more (maybe a Part 2 is necessary!). The places included on this list have been tried and tested by us and have held our kids interest. Keep them in mind when planning your next holiday!

Lucille has lived in the UK, Vietnam, Thailand, Turkey and South Africa and has traveled to over 40 countries. She blogs at www.expitterpattica.com and is currently raising her 3 boys in The Netherlands.