It’s road trip season, which, along with fun adventures, means hours of potential podcast listening. While we’ve attempted to get our son to be cool with our own favorite podcasts, he usually makes it a few minutes before he starts asking to listen to his own podcasts. While there are a ton of kid podcasts to choose from and some are, well, a little mind-numbing for adults, there are a few that my kiddo has gotten into that we grown-ups actually like listening to as well.

Check out some of these ones for your next road trip! 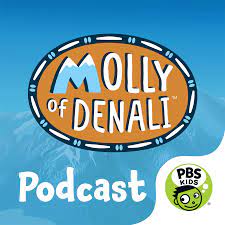 Molly of Denali from PBS Kids is about a Native Alaskan girl named Molly who lives in a fictional town called Qyah which is near the base of Mt. Denali. Her family owns and runs the Denali Trading Post. Molly has an incredible spirit and is always off on adventures that bring you along to amazing, beautiful places in that part of Alaska.

This kid podcast—along with the show which is also one of my faves—does an incredible job at teaching about the process of discovery, what it’s like to live in Alaska, and Native Alaskan cultural beliefs and practices. I learn so much from the grown-ups in the show just about how to encourage your kids to seek out the answers to their questions. There are also strong elements of Native Alaskan culture where you learn about cultural practices around gratitude and appreciation of nature. One show episode (although not sure if it’s covered in the podcast) even covers the history of the Indian boarding schools that were a huge part of tearing Native families apart and stripping them of their culture. The episode covers the topic so sensitively and beautifully showing the resiliency of the elders who were students in those schools

On top of it all, the stories are engaging, sweet, and interesting even for grown-ups because you really start to get to know and love all the characters.The only downside road trip-wise is that the episodes are about 15 minutes long, but you can breeze through a season quite easily. 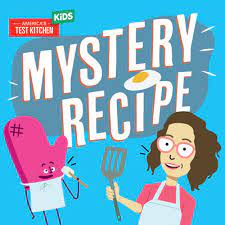 Foodies wanting to turn their kids into food-lovers and cooks are going to love America’s Test Kitchen’s Mystery Recipe. Every season is guided by one mystery recipe where each episode focuses on one ingredient. As the season goes on, you get more clues to the mystery recipe which will be revealed in the last couple of episodes.

There’s science! There’s history! There are activities! Bonus is they bring in some really great knowledge and info in kid-appropriate ways that are super useful for grown-ups to have conversations with their kids. For example, one of the second season characters doesn’t identify as male or female and they have a really great and direct conversation about using the pronoun “they.”

If you want to cook along with the finale, you may not want to do that in the car, but the sequential episodes in the season make this one a binge-able treat. 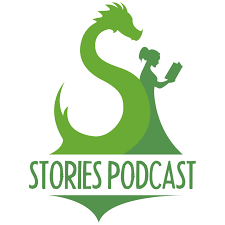 I’m not usually one to like kids story podcasts because they can be very slow-moving and a little over-the-top energy-wise, but I think Stories Podcast stands out as super interesting and engaging even for the adults in the room…or car. The host, Amanda Weldon, is an incredible actress that brings life to all her characters and can really draw you into the story.

A lot of the self-contained fantasy stories are written specifically for the podcast and really capture a kid’s imagination and are interesting enough to keep adults engaged. There are a ton of episodes to choose from, so you can have at it on a road trip. In addition to their self-contained stories, they’ve also done consecutive chapters called the Wylderwood series which are excellent for road trips as mini audiobooks for kids. They published Wylderwood Book One in full and most of Book Two is on the feed wherever you get podcasts.

Wow in the World 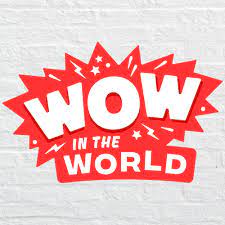 If you’re a U.S. national public radio nerd and know Guy Raz from How I Built This, you’ll probably get a kick out of his other silly persona in Wow in the World by Tinkercast. This is a science-focused kid podcast with main characters Mindy and Guy Raz and a cast of very silly and funny characters. Whenever I listen to this show, I’m in absolute awe of the creativity of the writers because this show is “bonkerballs” as Mindy would call it.

They explore super interesting scientific phenomena in the most out-of-the-world ways, usually through Mindy’s “Wow Machine” that is made of cardboard but it time travels and can shrink them and it can bring them to the depths of the ocean and to space. I find each episode absolutely hilarious and I have learned so many amazing things along with my kid about things like why the star called Betelgeuse seems to be dimming (and yes, there are Beetlejuice references), how cheese has musical preferences, and what engineers are doing in the realm of toilet technology.

All Posts »
Become a member
PrevPreviousBabyZen Yoyo Or ErgoBaby Metro: Which Compact Stroller Is Best For Travel?
NextFrom Planning To Cultural Considerations, A Journey To Socially Conscious TravelNext