A Family-Friendly Road Trip in Burgundy and Champagne, France with Grandparents

A road trip in family-friendly France is the ideal place for grandparents to take their grandchildren on a holiday.

After having had our grandchildren (grandbébés), Felix (five-and-a-half) and Alexia (almost three), staying with us at our chalet in l’Alpe d’Huez (Châlet les Carines) for two weeks, it was time to get back to the Charles de Gaulle/Roissy airport in Paris and onwards to New York. Their dad Marc-Antoine had left a week before and their mom Juliet was already on her way back home to Chicago. Shuddering at the prospect of an eight-hour road trip—with multiple pit stops followed by an exhausting trans-Atlantic flight—we crafted an alternative and hopefully more leisurely, bébé-friendly itinerary. We would take two days to meander our way to the airport through Burgundy and Champagne staying at B-and-B-style châteaux.

Instead of experiencing what could have been a true ordeal for all, we had a wonderful time with our little ones. Come join me for this brief account of our adventure!

After leaving leaving l’Alpe d’Huez, we stopped for lunch in Grenoble’s vieille ville (city center) giving the kids some time to run around and hopefully prepping them for a long nap in the car… It worked! They both slept during most of the two-and-a-half-hour ride to La Chapelle Thècle near the beautiful city of Tournus in southern Burgundy. Why La Chapelle Thècle? This hamlet is not on any tourist’s radar but it’s on ours since this unheard of place and surrounding villages were home to my paternal ancestors reaching back to at least the 16th century.  We wanted to reconnect with some distant cousins we had lost touch with in the last decade. Why not share this experience with the kids? After all, these are their roots as well.

As we tried to locate the old family farm, we got impossibly lost on the narrow roads winding through the lush farmland characteristic of this region in Burgundy, called  Bresse.  No GPS could help us here! Finally, in despair, we stopped in La Chapelle Thècle’s s little square. The kids and Papou  (my husband) ran off to the village playground complete with a slide and climbing net. Meanwhile, I happily found an open door at the local school which was undergoing renovations. Even better, the mayor just so happened to be there. He  was friendly and knew that one of our elderly cousins was indeed still alive. Equipped with old-fashioned hand-guided directions, we set off again on our cousin-finding mission.

Fifteen minutes later, we found the farm, Le Beau. Eureka! It hadn’t changed since our last visit 10 years ago. In the last two centuries, countless ancestors had lived and died here. Some, including our forebears, left for Paris with the promise of a better life, never to return or only rarely.  Le Beau is definitely what you call a well-lived and -loved home. Felix and Alexia were thrilled to discover cows mooing away in the stables. 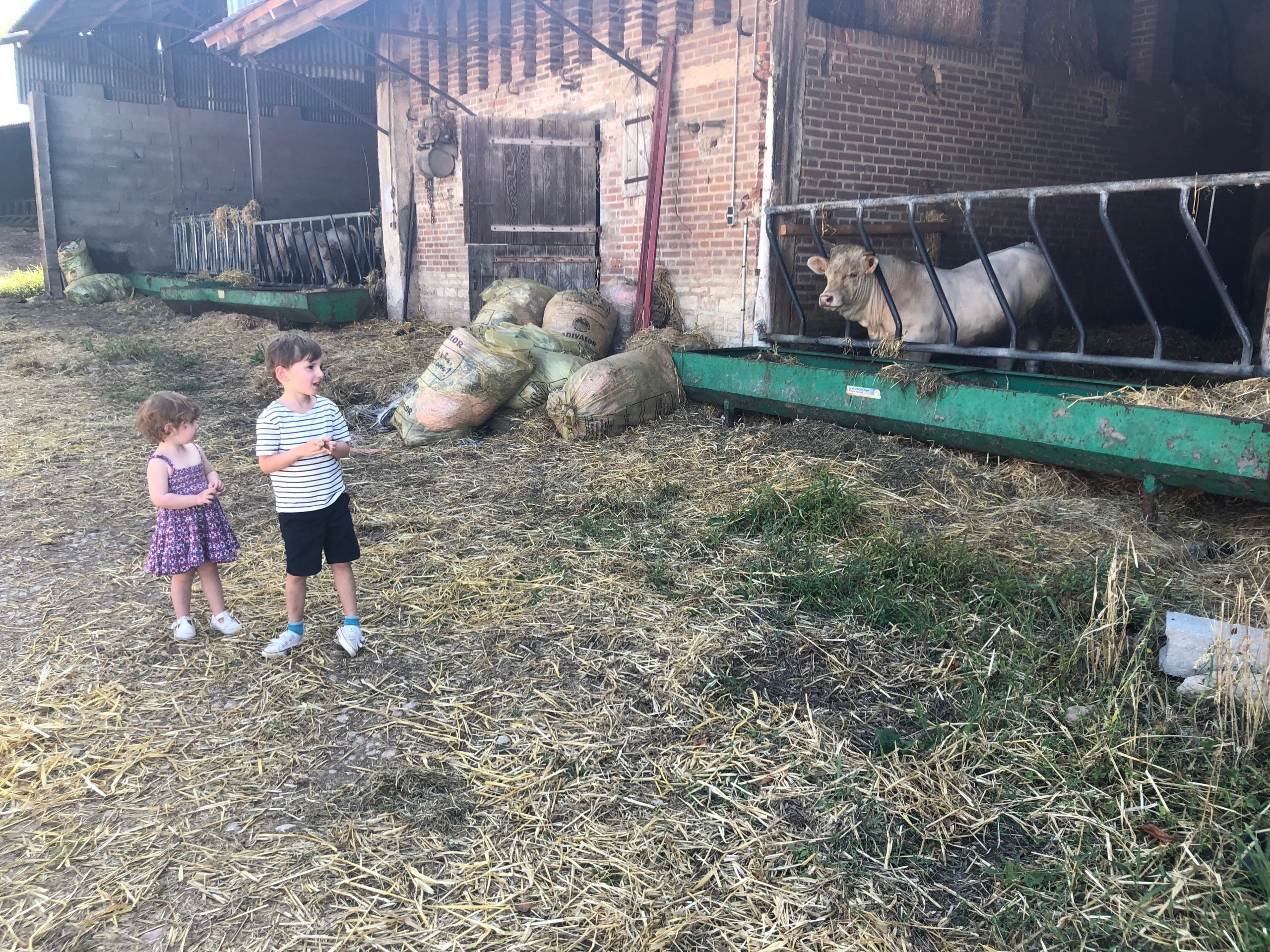 Our elderly cousin Julien, 96, was both surprised and delighted to see us and meet the little ones. It was so unexpected to actually find him alive and well and we were all so happy!  It seemed like yesterday when we introduced him and his late wife Simone to Juliet and her brother Olivier, then ages 10 and 7. Now, he was meeting the new generation! He showed the kids the old well explaining how this was how their ancestors fetched their water. Felix seemed quite shocked at the prospect of no running water… Meanwhile, Alexia cooed with delight when I explained to her that this was how Princess Snow White got her water.

After a lovely visit, we made our way to the Château de Préty, our bed-and-breakfast for the night, in the nearby village of Préty. We had an amazingly spacious two-bedroom suite with a bath and a kitchenette. One of the bedrooms was the old château library whose shelves stocked children’s books which the kids loved. They were also thrilled to discover toys in a bookcase right outside our suite. After changing into our bathing suits, we went for a swim in the château pool where we met young families.

The B&B recommended a nearby restaurant, l’Embarcadère, for dinner which is perfectly situated on the Seille river (a tributary of the Saône) in a hamlet called La Truchère. This casual open air restaurant is part of a small nautical center from where boats cruise up and down the Burgundy waterways. Having arrived without a reservation, there was no room for us in the boat restaurant. Instead, we were seated on the riverbank from where we enjoyed watching the boats come and go on the Seille. Typical of most French restaurants, the kids’ menu was both healthy and delicious. The service was also highly efficient–we were out within the hour. 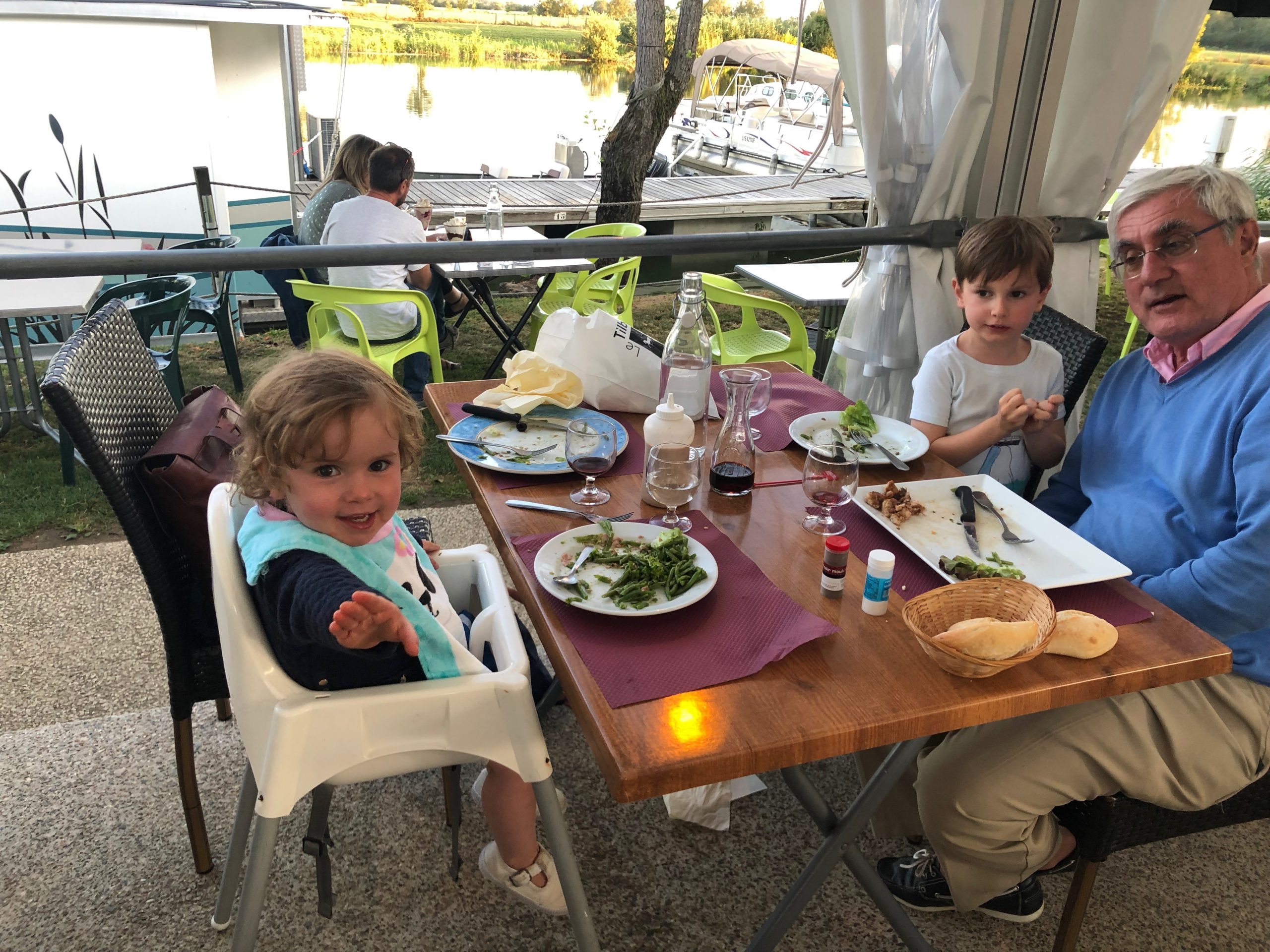 Next morning at breakfast, we met some grandparents from Belgium who were hosting a week-long family reunion with all their children and grandchildren at the château and adjoining guest cottages. Upon their recommendation, we headed off to Brancion, a recently restored medieval village including a castle with a marvellous dungeon. From the 13th to the 15th centuries,  Brancion had been important regional center for the Dukes of Burgundy. This pedestrian-only village is an ideal child-friendly introduction to medieval village life. It reminded me of the dream-like village featured in the latest film version of “Beauty and the Beast.”

At the castle entrance, there were racks of costumes and trunks with all sorts of medieval-style accoutrements designed for kids to do a little time travelling back to the Middle Ages. Alexia shrieked with delight as she slipped into a “princess” dress and headdress. As for Felix, he wanted no part of this masquerade. However, he immediately changed his mind when he discovered that he could play warrior knight with a make-believe sword.

Once he was dressed in his knight’s attire, he and his sister charged off into the castle grounds and up and down the castle and dungeon stairs. Knight Felix was swashbuckling his way around defending newly anointed “Queen Alexia” from her sworn “enemies.” Somehow, Alexia had managed a rather speedy ascension on the royal ladder from being a mere princess to queen!  After a good hour of intense knighting/fighting, the kids shed off their medieval attire–but not without resistance. Felix cried when he had to part with his sword… After a lovely 21st century lunch in a nearby garden café, we explored the little village of Brancion with its charming church, cottages, and cobble-stone streets.

A Brief Respite in Champagne

Our medieval adventure complete, we headed north to our next destination, a beautiful château B&B, Château de Juvigny, located in the Champagne region north of Paris. Dating back to the Middle Ages, the castle is an 18th-century jewel featuring charming rooms decorated with a light touch–simple but of ultimate bon goût.  The château proprietress showed us to our two very spacious rooms overlooking the vast gardens originally designed by Louis XIV’s illustrious gardener Le Nôtre. 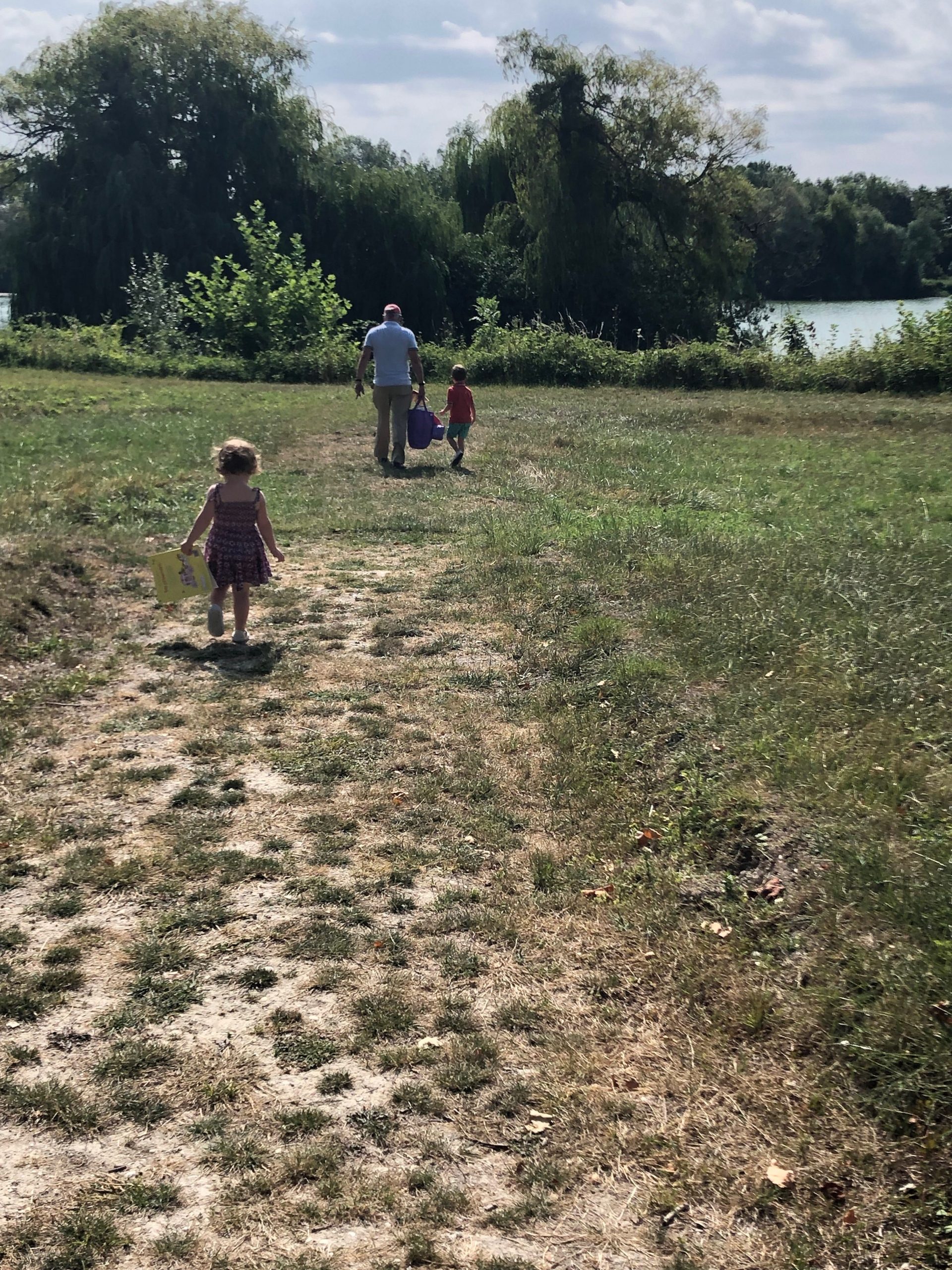 We then made our way to the lake beach where we went for a refreshing swim. On our way back, we pointed out the medieval moat surrounding the castle explaining to Felix why this had once been  so important in fighting “enemies.” Alexia just kept on “Wow-ing,” simply amazed at being in princess universe.

We had our last dinner together at an outdoor bistro on the Place du Maréchal Foch in nearby Châlons-en-Champagne.  After meandering through the pedestrian-friendly streets of this medieval town, we headed back to our château where the kids enjoyed their last night in “royal” comfort…We had a fabulous breakfast in the grand dining room complete with ancestral portraits. As our flight from Paris was only at 6PM, we had time to relax at the lake beach and let the kids run wild in the lush gardens. An hour later, we said farewell to châteauland and were sadly on our way to Charles de Gaulle/Roissy.

We stopped for lunch at an aire de repos (rest stop) on the highway where Alexia was thrilled to discover a toddler-sized toilet. I always asked myself why we don’t have these in the U.S. After all, they have been around for years in France. Not to mention the great playgrounds which you usually find at these aires. This one was perfect for the kids to let out some more steam before an eight-hour flight.

What the Kids Loved

Discovering the castles and other cool sights. We didn’t cover the key tourist (and also child-friendly) attractions in Burgundy, of which there are plenty. We showed them a few places we hope peaked their curiosity. Next time, we will plan a few more days to explore all the fun kid-friendly things to do.

Seeing the joy on their faces when they discovered a new thrill.  We will never forget Alexia cooing with sheer delight at seeing her princess storybooks come to life–”Wo-ow!”

Should Your Parents Attempt a Road Trip with Your Bébés?

If they’re in shape and up for it–why not? Just remind them to focus on visiting a couple of places per day that are reasonably close to each other. They shouldn’t overplan or they will be frustrated! We loved the château B&B concept. The hosts were delightful at both châteaux and very welcoming with children. For the kids, it was wonderful to enjoy the comfort of a very special home away from home.

Would We Do It Again?

Yes, yes, and yes! We loved traveling with our own kids and forged some unforgettable memories. Why should this stop with our grandkids?

If you want to explore out-of-the-way charming B&Bs, including private houses and châteaux, I recommend the French guidebook Guide des Hôtels et Auberges de Charme (Les Guides Rivages, on-line at www.iguide-hotels.com). You can find can find true gems, many of which are bébé friendly.  Both print and digital guides are in French. Ask a French-speaking friend to help you if needed or call the places directly. Everyone speaks some English now in France. Just  make sure you let your hosts know the ages of your children so they can best prepare your visit.