We are the Watertrees, and we live in Tokyo. By many counts, it is the biggest city in the world, but where we are it feels like living in a small town. It is an amazing city to live in, clean to the extreme, friendly to parents despite more Japanese being over 75 than under 5, and there are so incredibly many things to do. They change with the seasons, too.

We have triplets, born four years ago in September, so travel is a bit different from families where one child can watch the other. The kids are amazing about traveling and love it, they keep asking when we are going back to Okinawa or Korea. Mommy and daddy are working hard to plan the trips and make money for them, we will go to Sweden over Christmas and our next Asian trip is Malaysia next year.

Our kids like routine but we try to discover new things whenever we have a chance, so here is a typical day – although it would not be typical at all. When we travel, we try to follow the same basic schedule when it comes to sleep and meals, which has worked amazingly well.

0700 or occasionally a little later

Kids wake up mommy and daddy. Actually we sleep in the same bed, but they tend to be bright and early while mommy and daddy like to watch television when the kids have fallen asleep. On weekends, they want to watch the childrens TV programs, there are some really amazing ones, showing you how to make craft things out of paper and exploring the life of animals and insects from their viewpoint.

Breakfast. Normally yoghurt and sandwiches but sometimes Japanese breakfast with rice and miso soup. The kids eat most things – but refusals can be somewhat unexpected, and usually means they are not actually hungry. Like when my son refused to eat his sandwich this morning because the jam was not spread evenly enough.

Off to the park. Unless we are planning a full day out, we love going to the park. We have several close by, and today we discovered that volunteers have arranged to use the pool in the mothballed school nearby as a put-and-take fish pond. But more often, the kids play ball, use the slides, or just run around. If we are going somewhere else, to a museum or shopping, we start at about the same time even though they only open at 10. 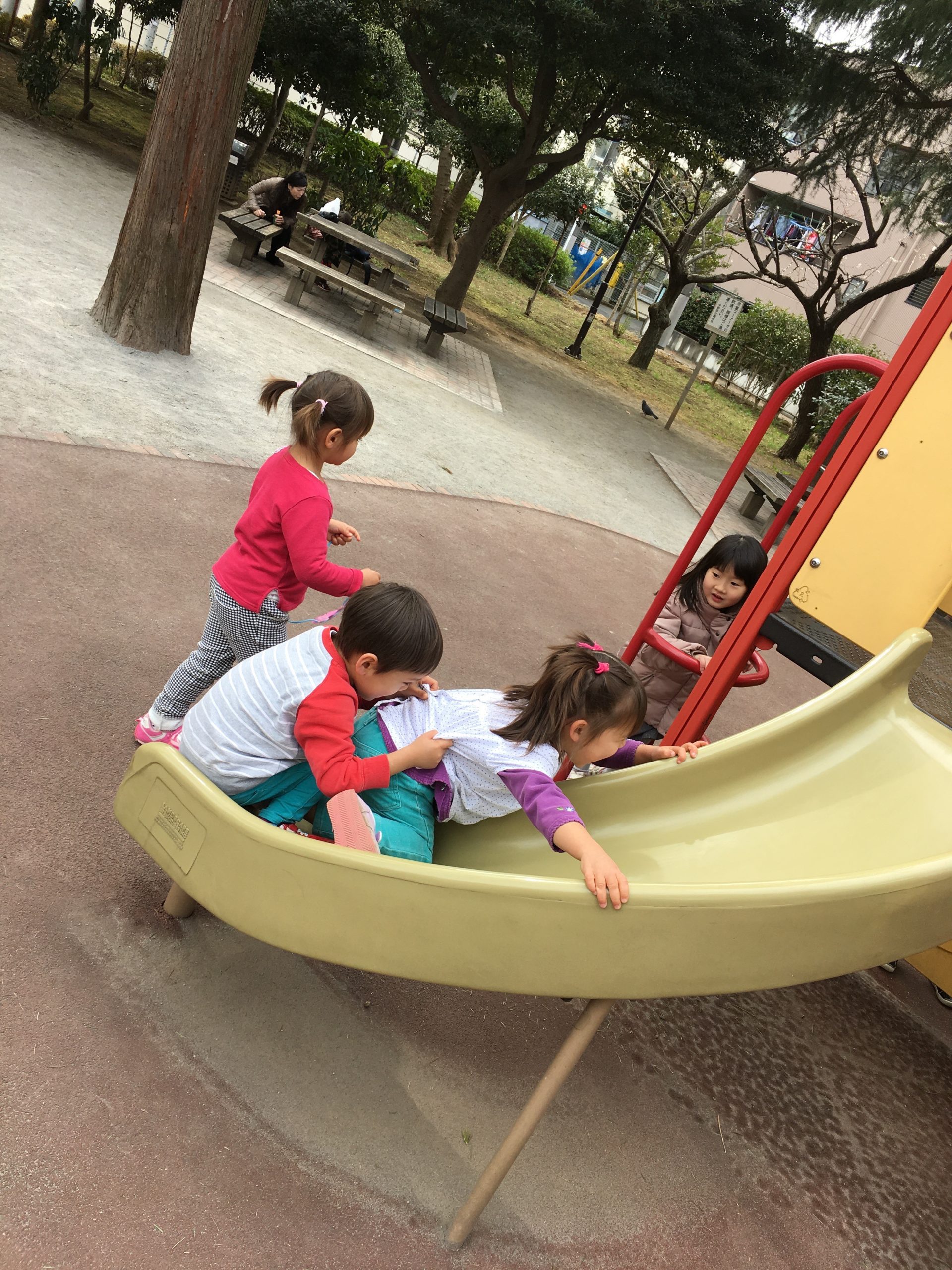 We usually go to one of several parks along the Myoshigawa river, since they are close to home. From Shinjuku, it is a 12-minute train ride. The kids favorite is Heiwa no Mori, a park with a huge open space for play and games, often used by an American Football team for practice, as well as the local kite flyers and cricket teams. There is a baseball diamond too, which the local school leagues use for games and practice.

A little further down the river, closer to Arayakushimae station, is the only park you will probably find that was planned as an education in philosophy. Tetsugakudou Koen was created before World War II, when the surrounding area still was rice fields. You have to figure out the philosophical aspects of the park yourself, but it has a great playspace across the Takebashi bridge (this is actually a separate park, Nishiochiai park). Even further downriver, closer to Nakai station, is Ochiai park with amazing play spaces; this park is part of a chain of parks creating a green space along the little river from Nakai to Numabukuro. In Arayakushimae, the temple park has some nice play equipment, a splash pool in summer, and is the favorite spot of the locals for cherry blossom viewing.

When we do not go to our local parks, the favorite is Shinjuku Gyouen, southeast of Shinjuku Station. This park is huge, one of the first public parks to open in Japan, and immaculately maintained thanks to the entry fee (less than a small latte at Starbucks). It has some nice formal Japanese gardens, as well as huge spaces for the kids to play. But no playgrounds with equipment, for that you need to go to one of the smaller parks.

Shinjuku may be underrated as a tourist area, more famous for the Kabukicho and Goldengai entertainment districts than for the local attractions. But if you are interested in architecture, the Shinjuku highrise area is fascinating, and the view from the Tokyo Metropolitan Government office is second to none. There is also a park, Shinjuku Chuo Park, at the end of the area where you can let the kids run around. Or go to the playground on top of Odakyu shopping center, very easily accessible from Shinjuku station.

Snack time. Unless they are too preoccupied with activities, they get peckish at 11. So then we give the kids Japanese rice crackers. Our son loves sweet things but that makes him (and his sisters) hyperactive. And we worry about his teeth. Rice crackers are cheap, everywhere, and they love them too, so it is a win-win situation. 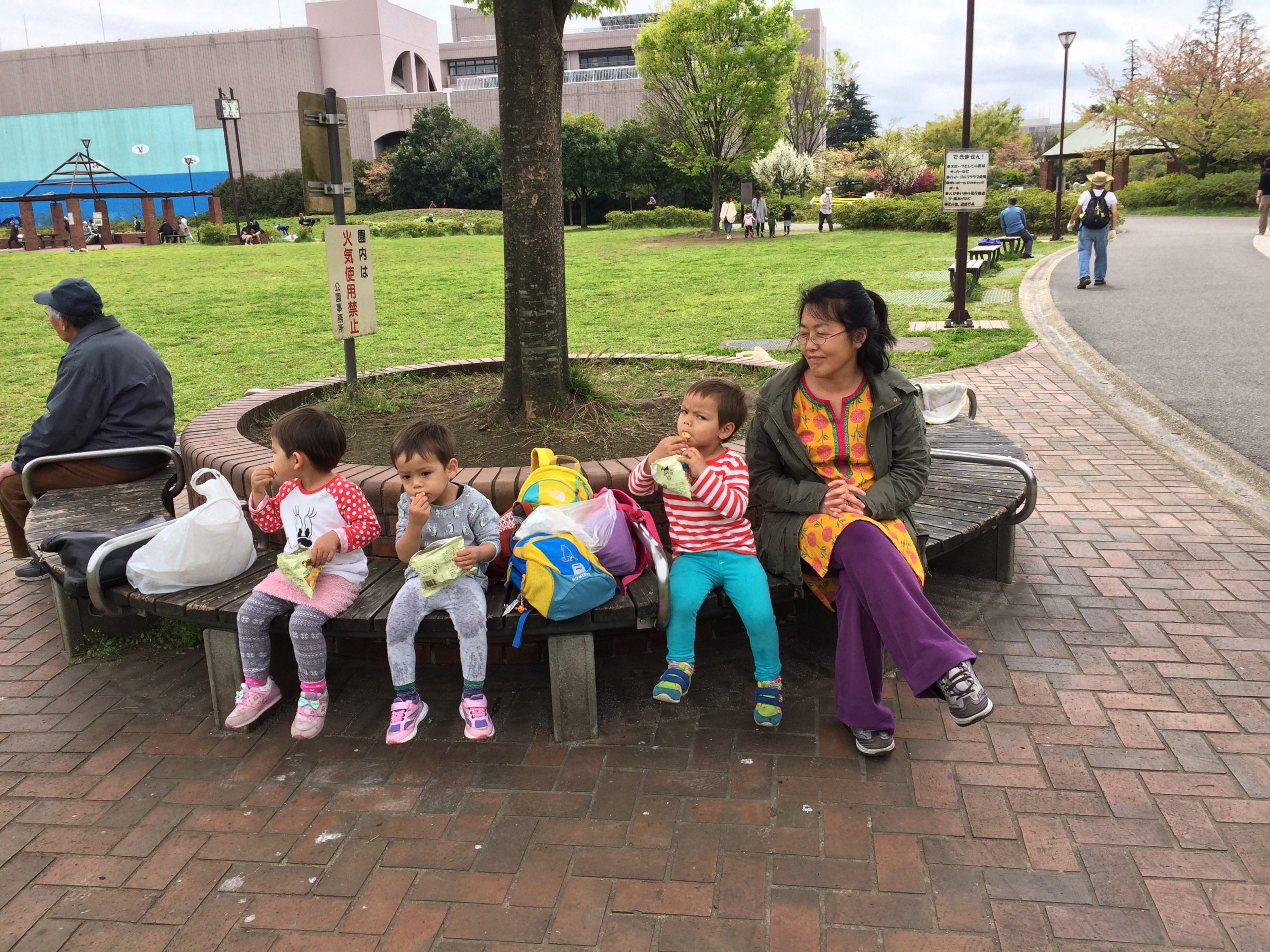 Lunch time. We usually try to explore new restaurants in the neighborhood, but we have favorites as well. There is an Italian pasta restaurant, Granpa, near the park which the kids love and that is very reasonable. And if we come at the right time we get the second floor to ourselves, so it does not matter how noisy the kids are. 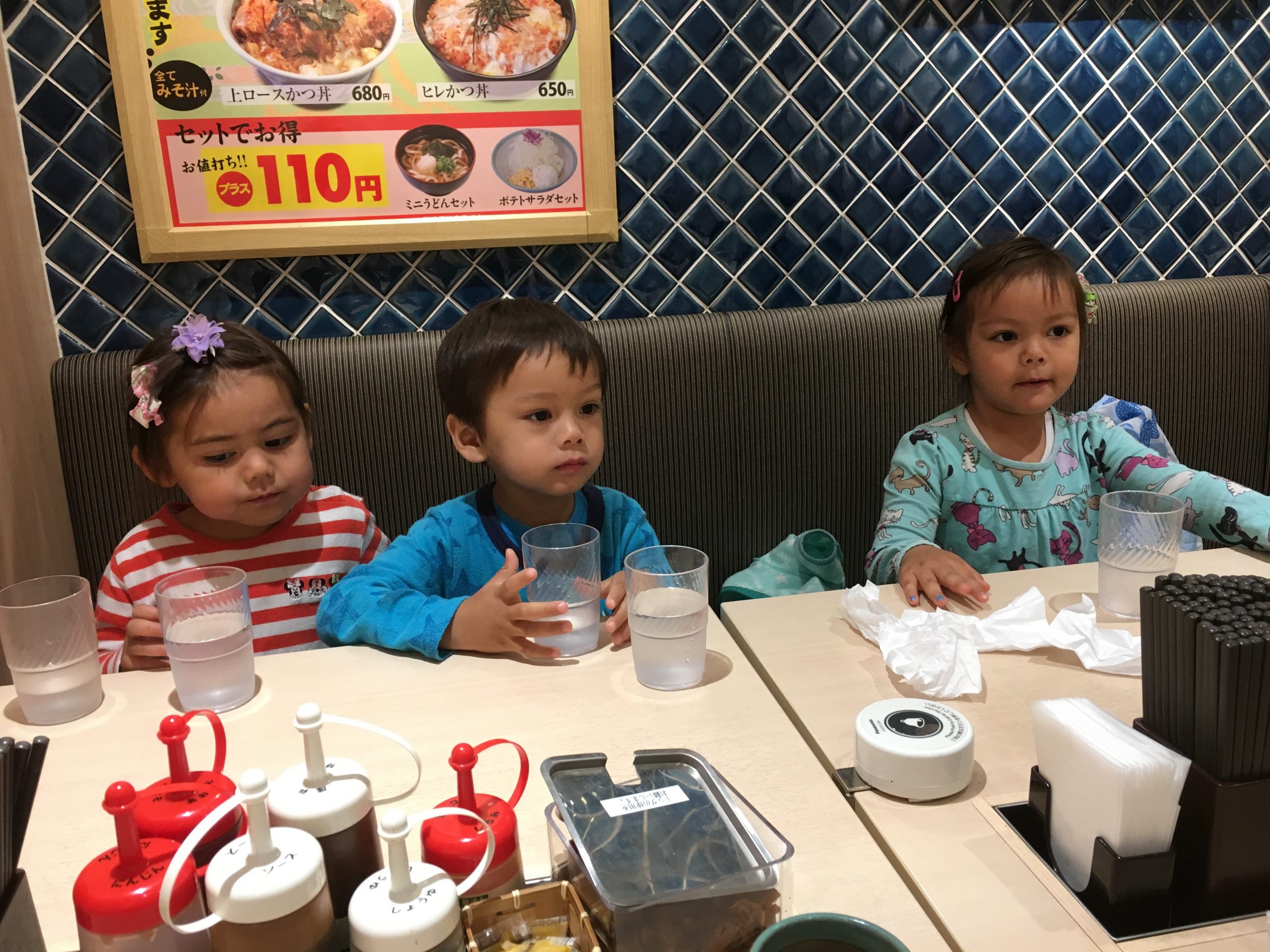 Back home for lunch nap. The kids are starting to skip the naps though, so we let them sleep if they are tired. If they skip the naps as we often do if we are going shopping, the bedtime comes a little earlier. If they do not take a nap, this is usually when we go to a different playground when we are out and about. There are playgrounds everywhere in Tokyo. The city is dotted with pocket-sized parks, used for evacuation in case of natural disaster, and they normally have a playground. Even if the equipment may not be the most modern or advanced.

Kids wake up from their nap, alternatively we are going back home if we have been out. We normally eat dinner around home – there is a Korean restaurant, Mugiya, as authentic as they come run by a guy and his mother just around the corner in Numabukuro where we often go, when we do not go to the Korean Quarter in Shinjuku. Easiest to find from the north exit of Seibu-Shinjuku Station, just turn right at the big road, and then you will see either the house with the potatoes outside, or the Don Quijote shop. The kids love Korean food, even if they do not like the spicy kind. But there are non-spicy Korean dishes too.

If not Korean, we may go to an Italian restaurant – Giovanni on Nakano-dori is one of our favorites. Or we go to a traditional Japanese restaurant, like Chikuzenya, specializing in grilled chicken or pork skewers, or motsunabe, the typical working-class official stew. It is built to make you feel nostalgic for the post-war era, very successfully. We often bring friends here, as it is on the street from the northern exit of the station.

But like anyone in Japan, even at a smaller station, we are spoiled for choice as there is a small entertainment quarter catering to the locals around the station. You will find at least a few restaurants near any railway or metro station. Often typically Japanese, mostly populated by locals, and frequently welcoming to foreigners. If they have place to seat you, as many places (especially those with strings instead of cloth door hangings) are really drinking places. You would not want to go there with the kids anyway. 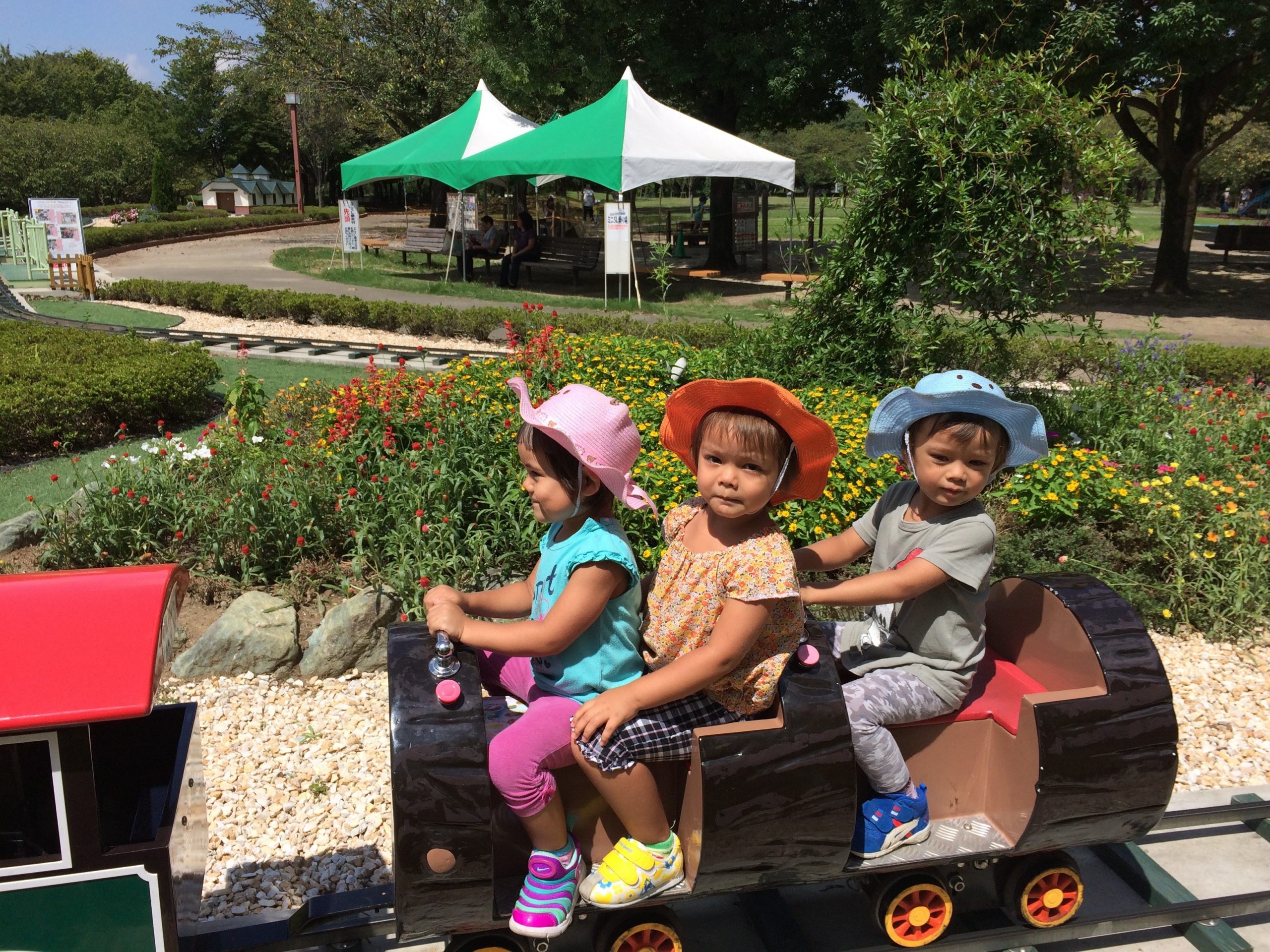 Bath or a shower for the kids, they are sweaty and we have smeared them with insect repellent which you want to get rid of before going to sleep. Insect repellent is a must in Japan in summer, the mosquitoes get really aggressive. Even if they do not spread any dangerous diseases, the itching is reason enough to make sure your kids are not bitten. Then around 2100 it is time for bedtime. Well, it often happens a little later. We try to make the kids relax by reading stories and that often means bedtime is pushed half an hour.

So how do we like living in Tokyo? Well, compared to Bangkok (where we lived when the kids were born), it is clean, quiet, and extremely orderly. Sometimes too orderly – a lot of the charm of Bangkok was the vendors on the sidewalks, and the unexpected temple stuck in a residential neighborhood. Although you can find that in Tokyo too, if you walk around a bit. With the big trees and ageing houses it is almost impossible to imagine this city was a bombed-out wasteland 70 years ago. But when World War II ended, the Japanese directed all their energy towards rebuilding – and not just homes, but temples, shrines, and community resources as well.

The residential neighborhood where we live is quiet – we can hear the neighbors dogs barking at night. But at the same time, a 30 minute train ride takes us to the Imperial Palace. We have shopping next door that other people travel halfway around the world to get to. And everything changes with the seasons. I do not think we want to trade Tokyo for another place to live. At least not for a while.

Follow the Watertree family on their adventures. They live and travel East Asia & Pacific with their triplets, and love to tell about what it is like and what they discover.