Community > Foodie Kids > A Day In The Life of a Family in Bangalore, India

A Day In The Life of a Family in Bangalore, India

Hello! I’m Jenny and we moved to Bangalore three months ago. We’re from the UK and we
have two cheeky boys aged 2 and 3. The opportunity to move to India arose through my
husband’s work (software development) and seeing that we love to travel, it was too good an
adventure to turn down! 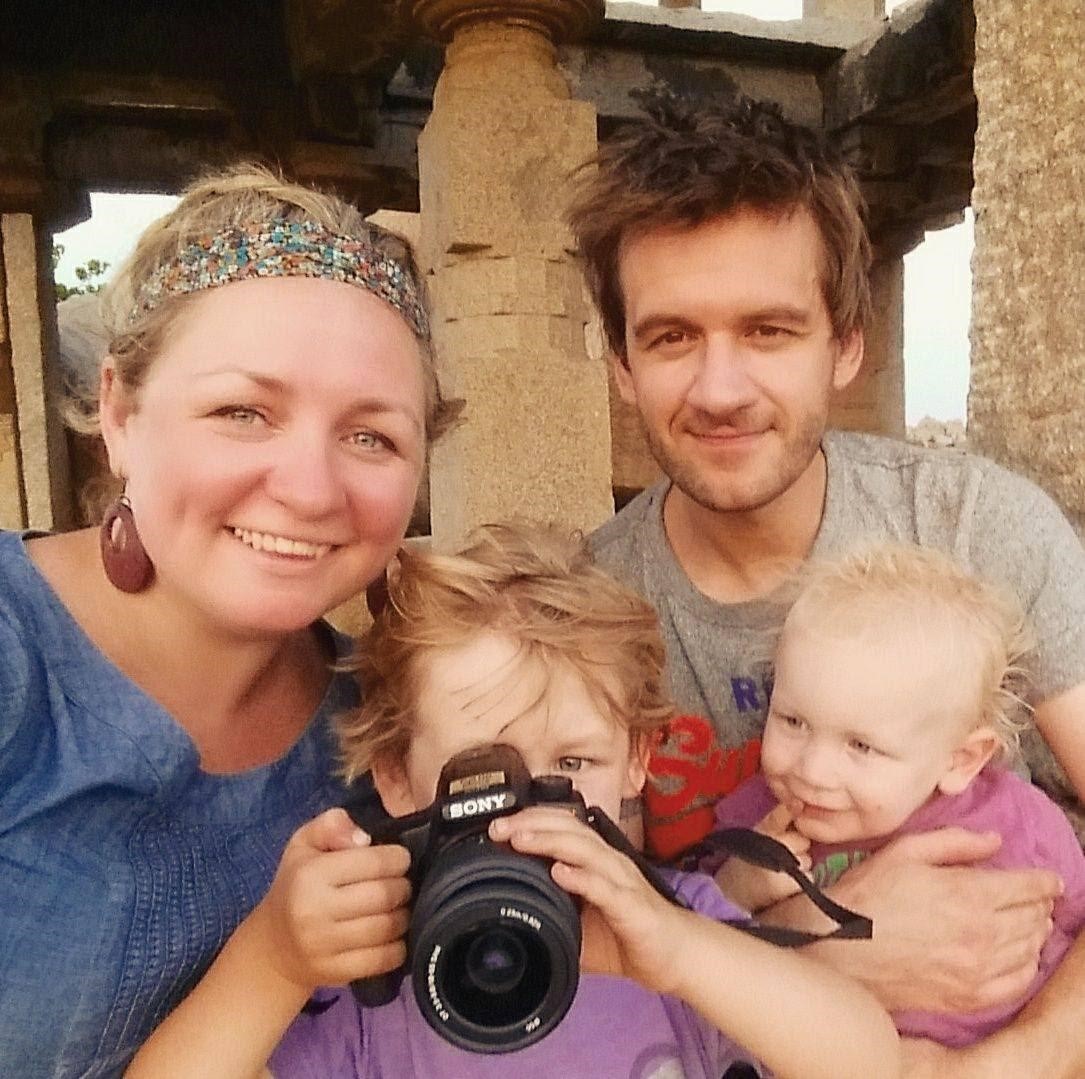 Bangalore, like most Indian cities, is loud and chaotic, and the boys receive a lot of attention
whilst out and about. However, we have a lovely apartment on a gated complex, which
provides an oasis and balance to everyday India. During the week, whilst Jason (Dad) is at
work, the boys and I explore local parks and playgrounds or enjoy playdates with new
friends at soft play or hotel swimming pools. Every other weekend we like to hop on a
sleeper train to explore a new city altogether; Hampi, Pondicherry and Kochi are just an
overnight train journey away. Then the weekends we have at home, we always try and find
somewhere new to explore.

6:00AM
Our boys are early risers and once they’ve had their fix of Paw Patrol we all do puzzles and
crafts before breakfast at 7:30AM. A recent visitor from the UK has brought over a big jar of
Marmite, so we all enjoy some toast along with bananas from yesterday’s market.

8:30AM
We want to leave the apartment early today as we’re visiting the Iskcon Temple in Northern
Bangalore. It’s one of the world’s largest Iskcon Temples and we want to beat the
horrendous traffic and get there early. It’s only 15km away, but if we leave it till later in the
day it could take us 2 hours to get there! I order an auto using the Ola app on my phone and
one arrives a few minutes later.We’re soon careering around the streets of Bangalore in our open auto, the boys are now used to the incessant honking, although still like to point out the meandering cows in the road. 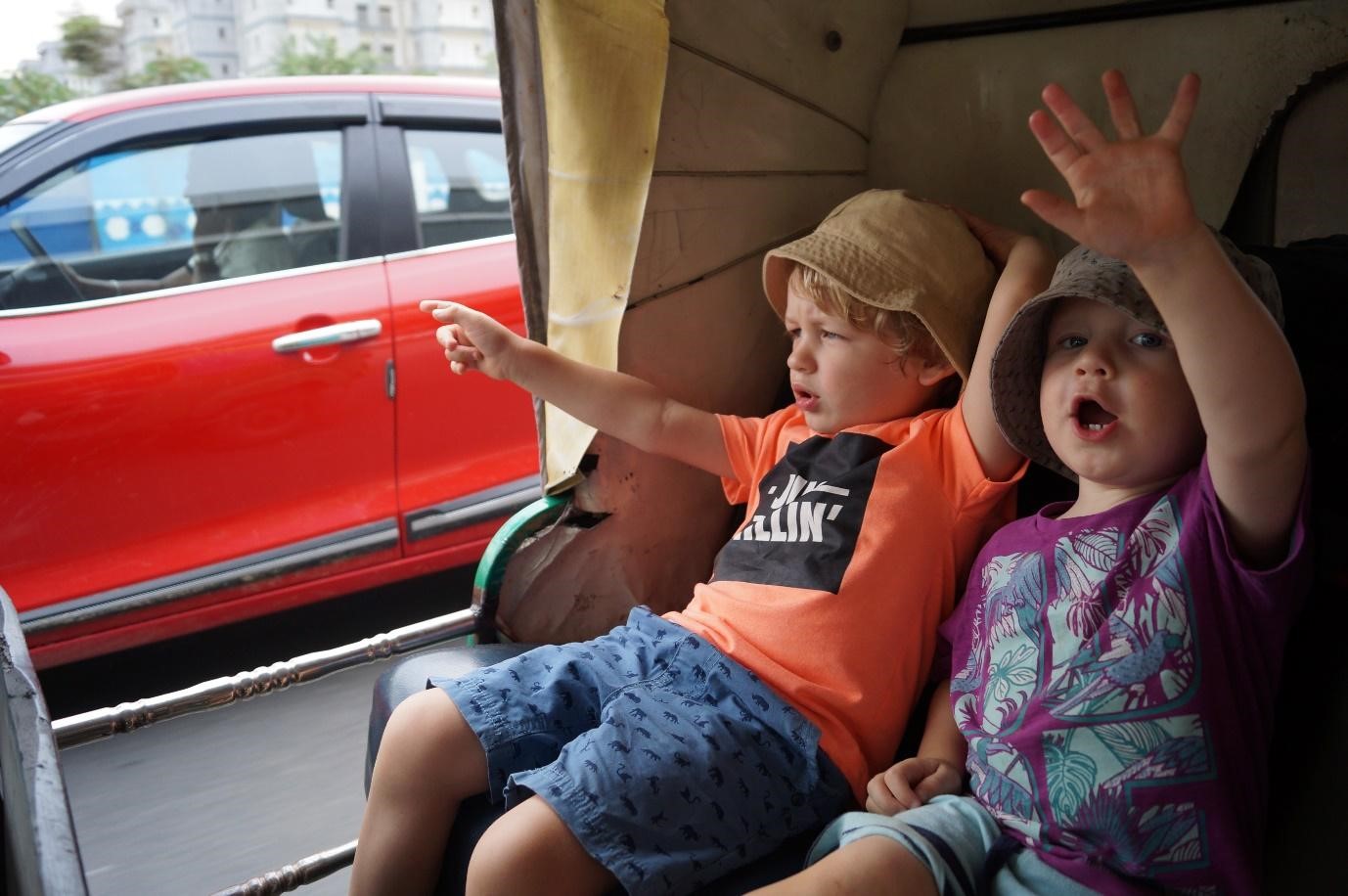 9:30AM
We walk up the steps to the temple and drop off our bags and shoes for a small fee of Rs10.
I didn’t bother to bring my DSLR as photography is prohibited inside. The Hare Krishna
chant provides an endless soundtrack as we marvel at the lavish decorations and watch the
fascinating ceremonies taking place. We decide to treat the boys to a Hare Krishna wooden
flute for Rs150 each. I think we’ll regret that later! 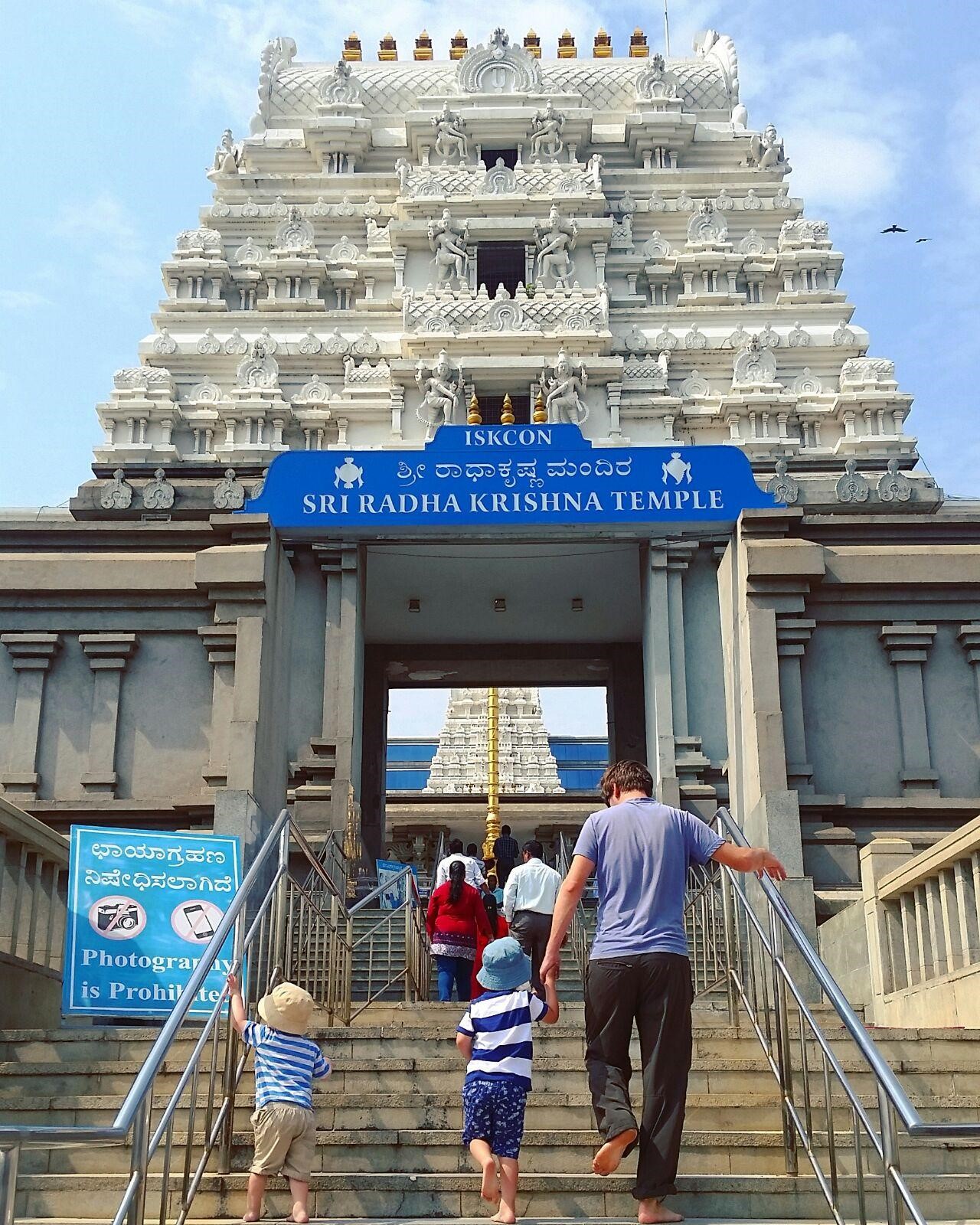 11:00AM LUNCH
As we leave the main temple, we step into the fantastic Hare Krishna food court. We select
some samosas, finger chips, fruit and a rice dish in a banana leaf, all vegan. Unfortunately,
we can’t really eat our food in peace as a queue has formed of people wanting to take selfies
with the boys. We politely and firmly say ‘no thank you’ and realise that the food is better
enjoyed in the auto on the way home. 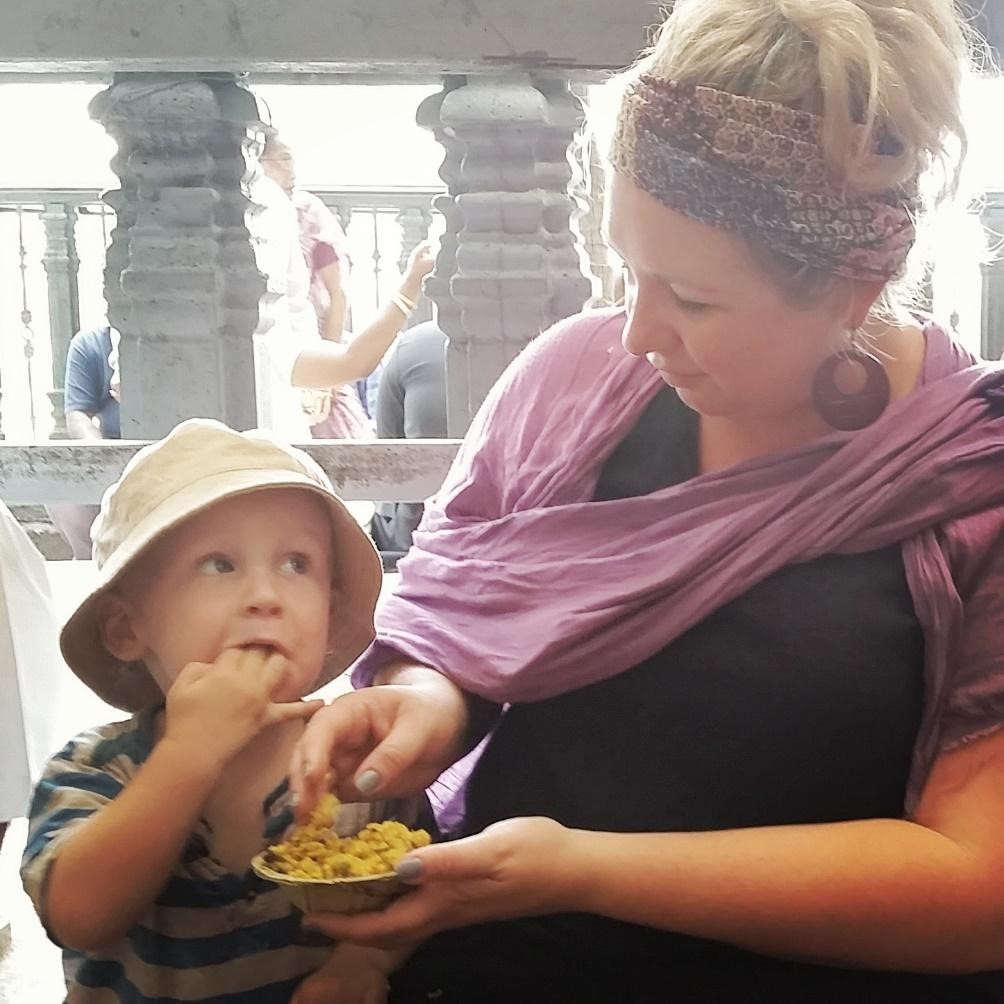 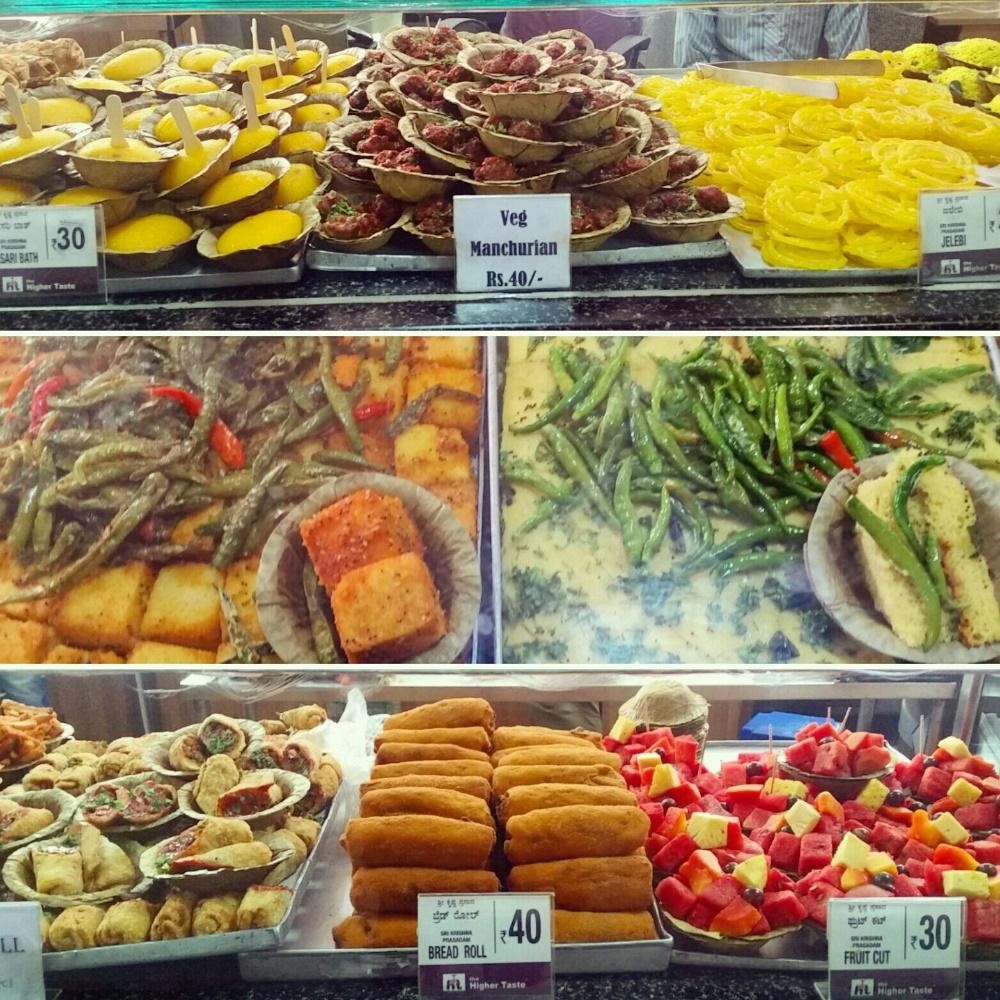 11:30AM
The traffic has built up and the ride home takes an hour and a half. The boys aren’t bothered
though as they’re curled up in our laps having a good nap. The noise of the traffic and stop-
start of our auto doesn’t wake them.

2:30PM
After a chill back at home, we head downstairs to the pool on our complex. Bangalore is a
chaotic city and it’s nice to have an oasis to retreat to. We can still hear the honking from the
roads, but that’s just something we’ve got used to, and the boys are happy jumping into the
water and splashing their Dad. We grab an ice-lolly from the shop and have a quick play at
the playground before heading out for dinner. 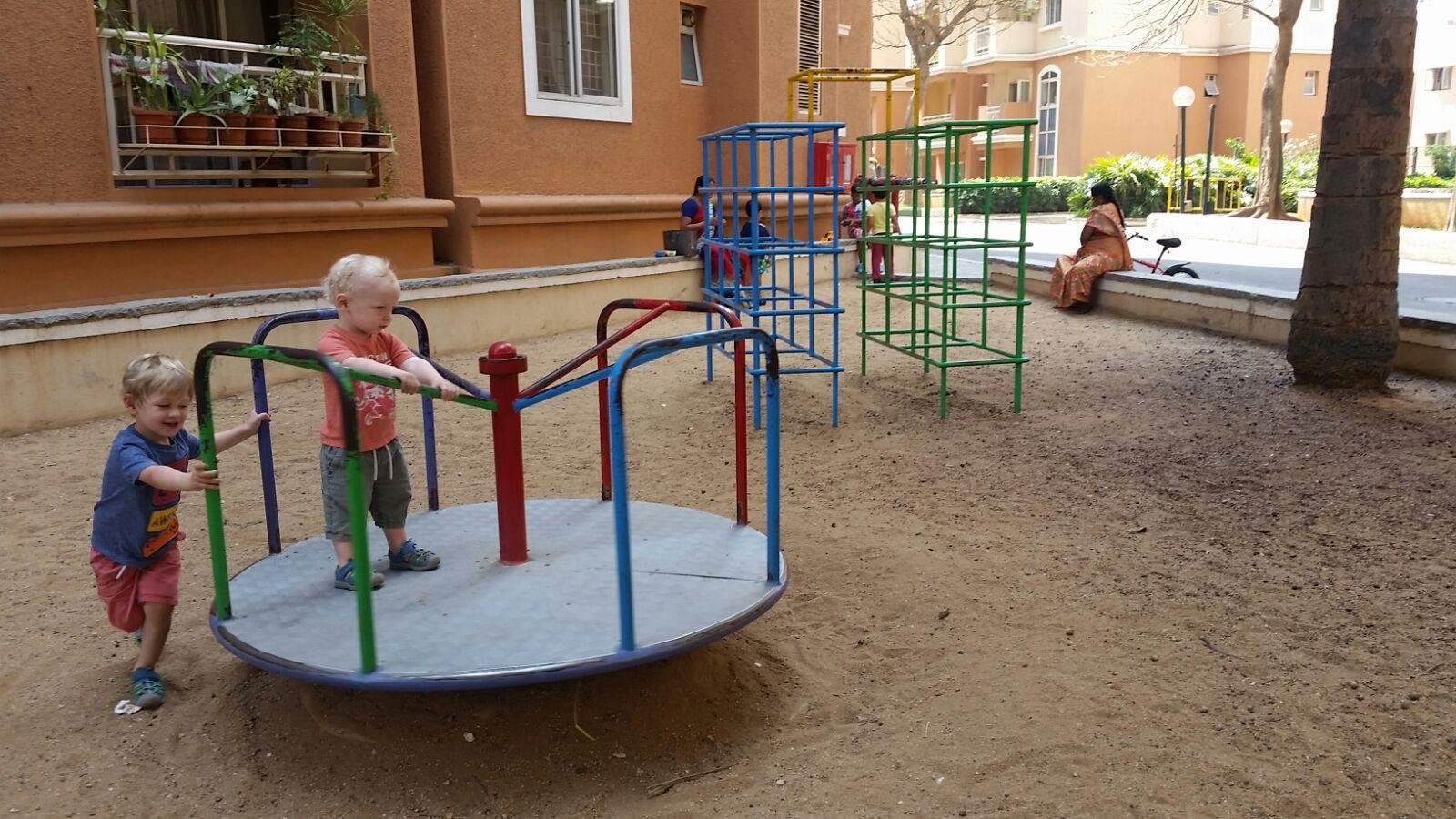 5:30PM
We rarely cook as it’s so cheap to order delicious food to our door using the Food Panda
app, which delivers from a range of restaurants. But this evening as it’s the weekend, we
pop round the corner to our favourite local restaurant. The pavement leading to the
restaurant is unsafe to walk on with big cracks and drops into the drain below, so we put the
boys on our shoulders and walk on the road.
The boys aren’t too keen on spicy foods, but the cook knows to make them a plain omelette,
and they’re already asking for naan bread. Jason and I order a Paneer Kadai, which the
boys try a little of, but quickly decide their omelette is better.

7:00PM
Back home in time for showers, books and bed. Once the boys are finally down, Jason and I
retreat to our balcony with views over Bangalore. We light a mossie coil, pour each other a
Kingfisher beer, and begin discussing our travel adventures for the coming months. 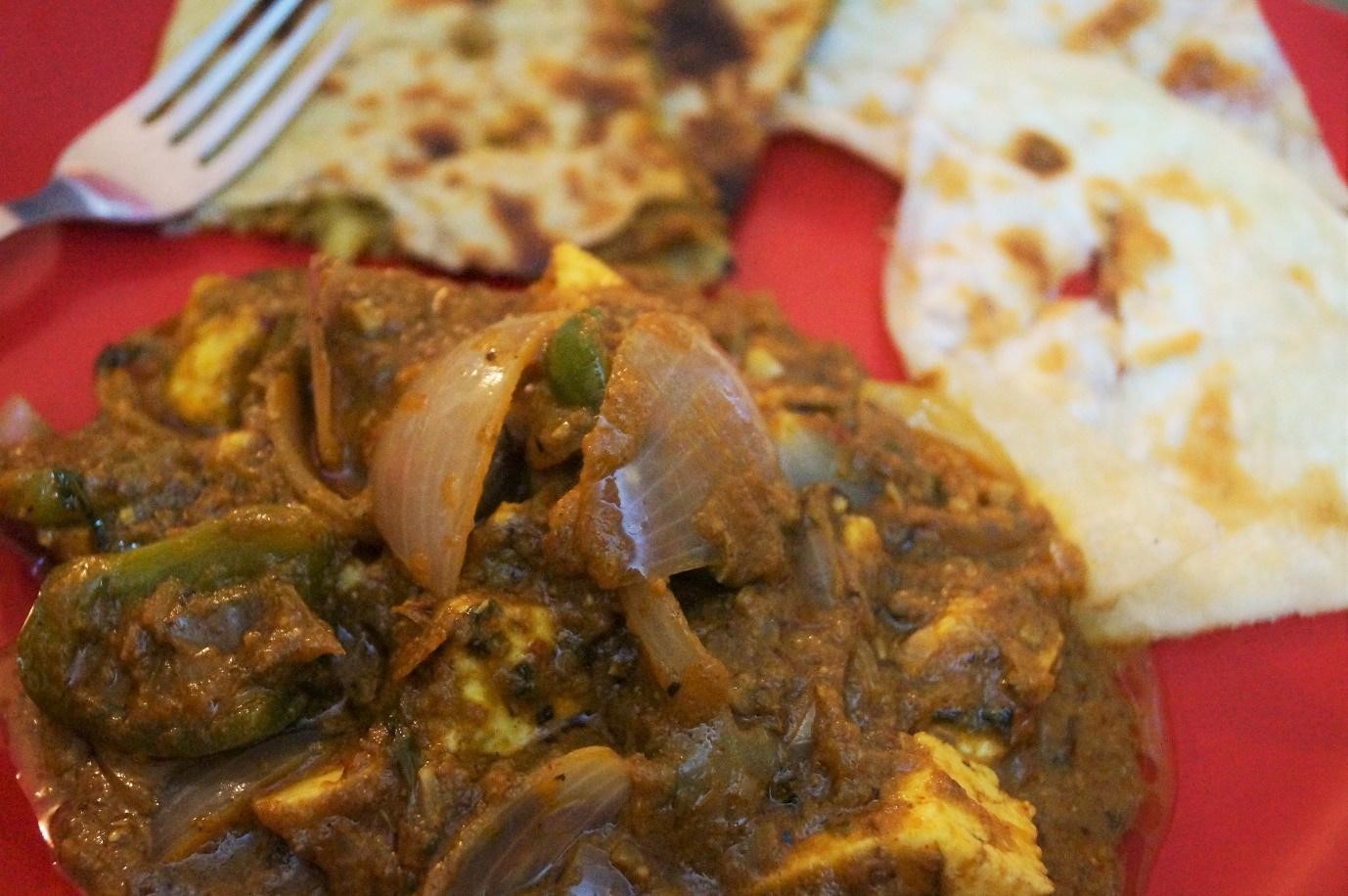