As Bébé Voyage’s Director of Content I wanted my editors’ picks this month to encompass the current climate of the world, the history of our past, as well as being hopeful for future travel. 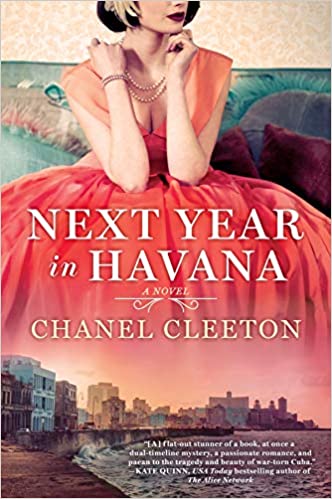 I’m an avid reader of historical fiction, enjoying the journey that many books take me on through another time and place. Last Year In Havana does just that through a love story set both during the Cuban revolution and modern day. A young woman travels to Cuba to scatter her Grandmother’s ashes and return her to the country she grew up and fell in love in. While there, she discovers a mysterious side of her Grandmother that she never knew existed. While finding out that her Grandmother fell in love with one of Fidel Castro’s right hand men, she also falls in love with a man that would change the course of her life while also giving her the closure she needed.

And Then All Hell Broke Loose

This one is not an easy, light-hearted read that I’m sure most were expecting here. It’s a history of the Middle East through the eyes of NBC Chief Foreign Correspondent, Richard Engel. Having lived in the Middle East for 7.5 years, I am deeply drawn to the area and am constantly reading up on news events and stories. This book is a riveting story of Engel’s life from when he was a freelance journalist to becoming one of the top Middle East journalists. It not only gives you a history of the region, but is also an adventure story taking you through two decades of wars and personal close-calls such as his kidnapping. While this book is not for everyone, it is an educational read for anyone who wishes to gain a deeper understanding of the turmoil and history in the region.

As the Director of Content for a family travel site, I obviously had to include a luggage brand as one of my editors’ picks! My favorite luggage right now is hands down, Tom Bihn. Made in the USA with a classic and timeless design, these bags are meant to hold up to the beating that avid travelers tend to put their luggage through. As a parent with very little free time, it means a lot to me when I buy a product that I know will consistently prove itself time and again. In fact, a high quality product is the quickest way to make me a loyal customer who will recommend the product to friends and family. I’m also pretty obsessed with their company philosophy of mindfulness, fun, caring for others, and hard work. They talk about “striving to focus on the journey as much as the destination” which is something that I admire and believe in wholeheartedly. Here is a review of a couple of their most popular bags that we did a few years back.

A docu series on Netflix, this is one of those shows that will have you researching its release date and wondering how the network could have timed a show so perfectly. Released just a few months before the coronavirus became a global threat, this series talks about how the world would react if a highly contagious flu became a pandemic that quickly infected the world’s population. The first show talks about how scientists and epidemiologists assume the next big flu would come from an animal such as a bat. It dives into the controversy surrounding vaccines as well as the psychology that surrounds how people react to global emergencies.

A recently released documentary on Netflix, this is a must watch for anybody that has any form of social media on their computer or phone. It is especially necessary for parents to watch and understand the issues facing not only ourselves but our children as well. The documentary interviews big wigs from some of the top social media networks including Facebook, Pinterest, and Google. The consensus from them is that social media has been turned into something that is no longer used for good and bringing people together, but rather as something that divides our world. Many of them believe that the worst is yet to come with civil war being the outcome. The algorithms and technology that are used for social media are so advanced that we are all living in our own little reality believing that the other side is wrong, while we see the “truth”. Compound this with the political turmoil that many countries are currently facing and you have a recipe for disaster. Aside from politics, it also shines a light on how social media works like a drug and quickly addicts the user. Perhaps the most telling part of the interview is that the founders of these large social networks refuse to let their own children be on them with many completely limiting screen time altogether.

Did you enjoy our Director of Content editors’ picks? Check out the rest of our editorial team and see what their top picks are this month. Let us know in the comments what your favorite books, products, and shows are as well!

(She/Her) Kelly is the Director of Content for Bébé Voyage and enjoys traveling the world with her husband and two boys. A self-described travel junkie, she prefers to visit the "real" parts of a destination, rather than the more popular touristy areas. Always on the hunt for local restaurants and off the beaten path shops that most tourists never find.
All Posts »
Become a member
PrevPreviousLife And Travel As An Interracial Family: Sabrina Patrick-Urrutia Tells All
NextDid We Take Travel For Granted?Next