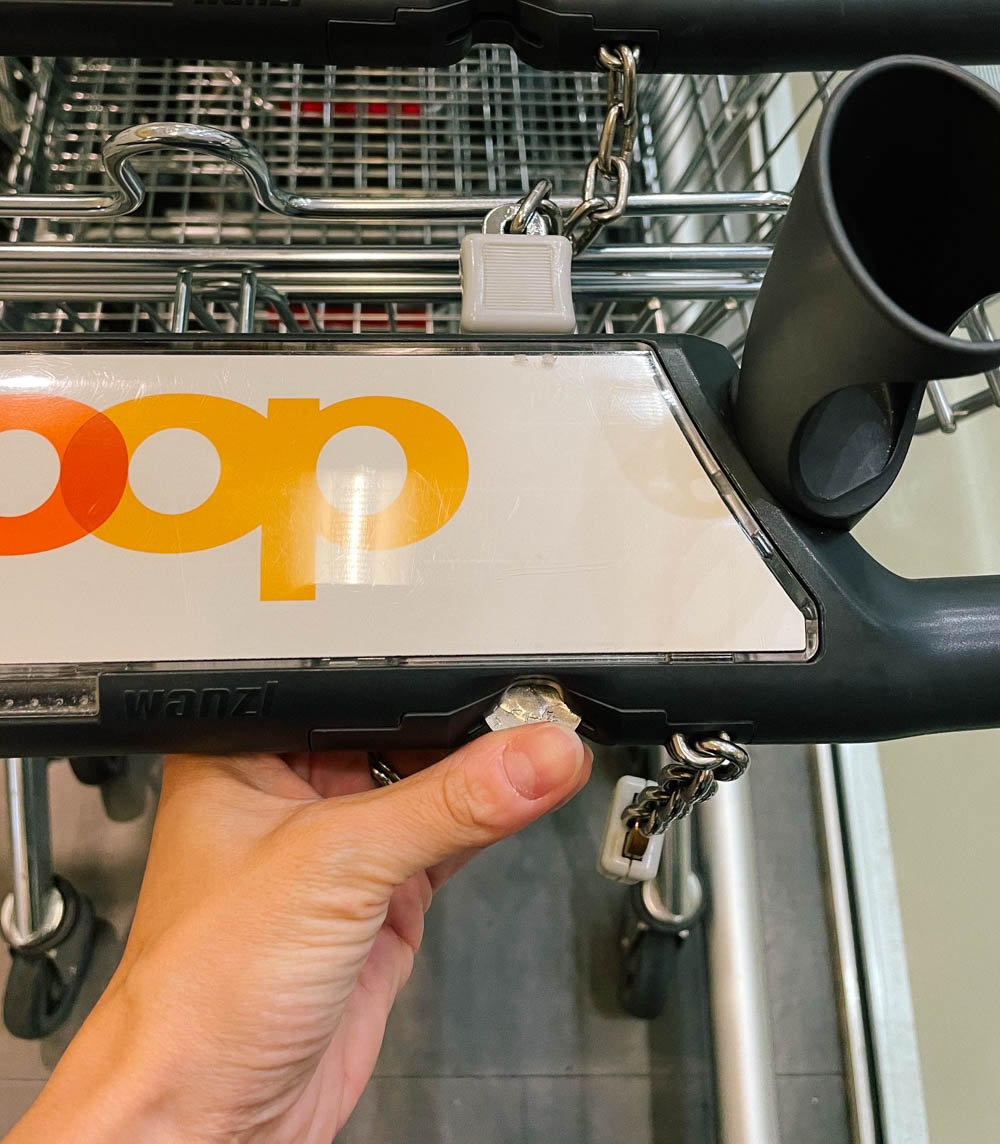 Something that I love to do (and now with kids, something I usually need to do) when traveling is make a visit to a grocery store; I find that they’re a great glimpse into how people in that place live. In NYC, we elbowed our way through tiny stores and only bought what we could comfortably carry the 10+ blocks home. In Texas, we relished in the wide aisles and huge carts and loaded up to our SUV-trunk’s content. Here in Switzerland, it’s a little bit in between. Here are a few things I’ve found to be interesting about Swiss grocery stores, and it’s not all about cheese (well, maybe a little).

In a rule-loving, law-abiding country like Switzerland, it’s hard to understand the purpose of these coin-unlocked shopping carts at Swiss grocery stores, but it’s the norm here. I don’t know if it’s to prevent people from stealing them or just to encourage people to return them to the locking stations, but whatever the purpose you’d better remember a coin or else you’re setting yourself up for an unintended arm day. It took me one year and four months to realize that if I carry an American quarter around that I’ll never spend it and will always have a coin on me. 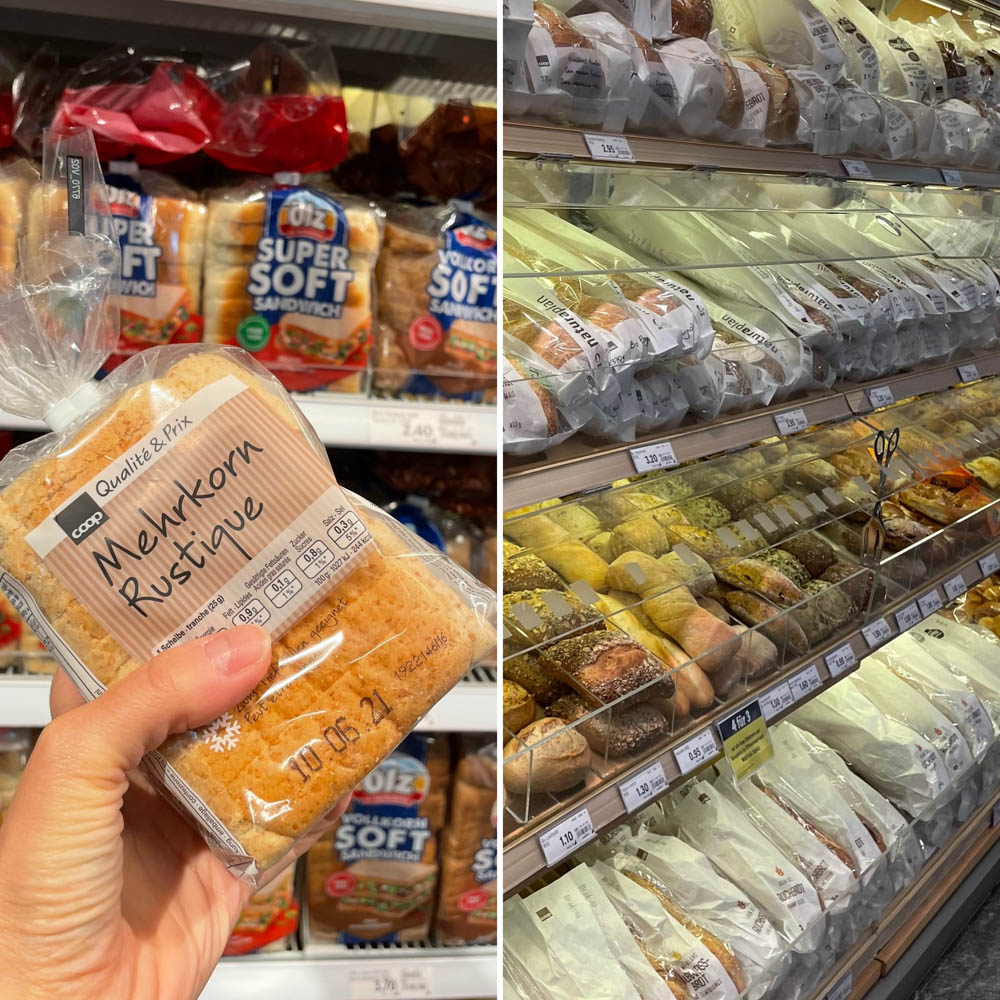 All right, so let’s start with the fundamentals: bread. It’s a thing here. Like a really big thing. I mean don’t get me wrong, I love a good bread basket, but this is next level. When someone in the U.S. is looking to buy a loaf of bread in a typical grocery store, it’s coming pre-sliced and in a plastic bag. In Swiss grocery stores however, that kind of lowly, squishy bagged loaf is not actually considered “bread”, it’s “toast” and meant specifically for that purpose only: to be toasted.

I mean look at this flour selection! There are different kinds for all sorts of different breads! Who knew? And traditionally, certain breads are reserved for certain days of the week, like the buttery challah-esque Zopf which is eaten on Sundays.

Cheese is one of the first things that comes to mind when we think of Switzerland, and it’s for good reason. But guess what? The orange “American cheese” slices that everyone gives us a hard time about? They exist here! It’s true! But like the sliced bread, it’s not really considered to be an actual version of what it’s pretending to be and is for “toast” sandwiches only, like grilled cheese, or on burgers.

I love the selection of the cheeses here in the Swiss grocery stores, because it seems that every mountain, every village, has its own local variety. Most are honestly quite similar, but I love being able to buy cheese from the mountain in our city.

They Have the Meats

Moving along on this unintentional sandwich tour comes the meat. In the States I’d either go to the deli counter or buy pre-packaged stuff that I would call lunchmeat. My German husband always thought that this term was super-bizarre, and now I understand why . . . there is no way that you could consume all of this meat choice at lunch time. In fact, it’s very common to find this on the breakfast table. The sliced meat choice here is a bit overwhelming — cured, smoked, herbed, spiced, all degrees of thinness — you make the never-ending party sub with the typical selection at the store here. 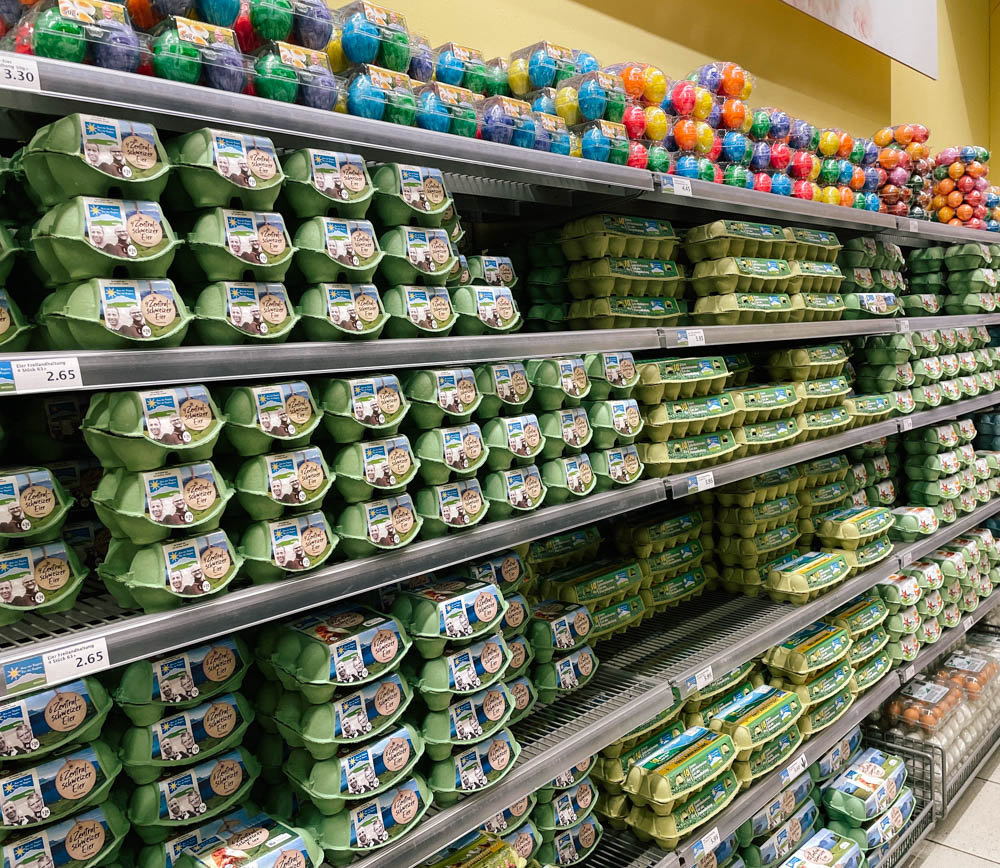 You may have heard that eggs are not refrigerated in much of Europe and the rest of the world and it’s the same in Switzerland. In the U.S., farms wash the eggs before selling them to prevent salmonella, which removes a natural protective outer layer. Here instead of washing the eggs, chickens are vaccinated against salmonella and refrigerating the eggs could actually cause mildew. So, unwashed, non-refrigerated eggs it is, which takes a little getting used to! Colored hard-boiled eggs (like Easter eggs) are also sold here, unrefrigerated, year-round and are called “picnic” eggs. They’re best eaten with a seasoned salt beloved by the Swiss called Aromat. 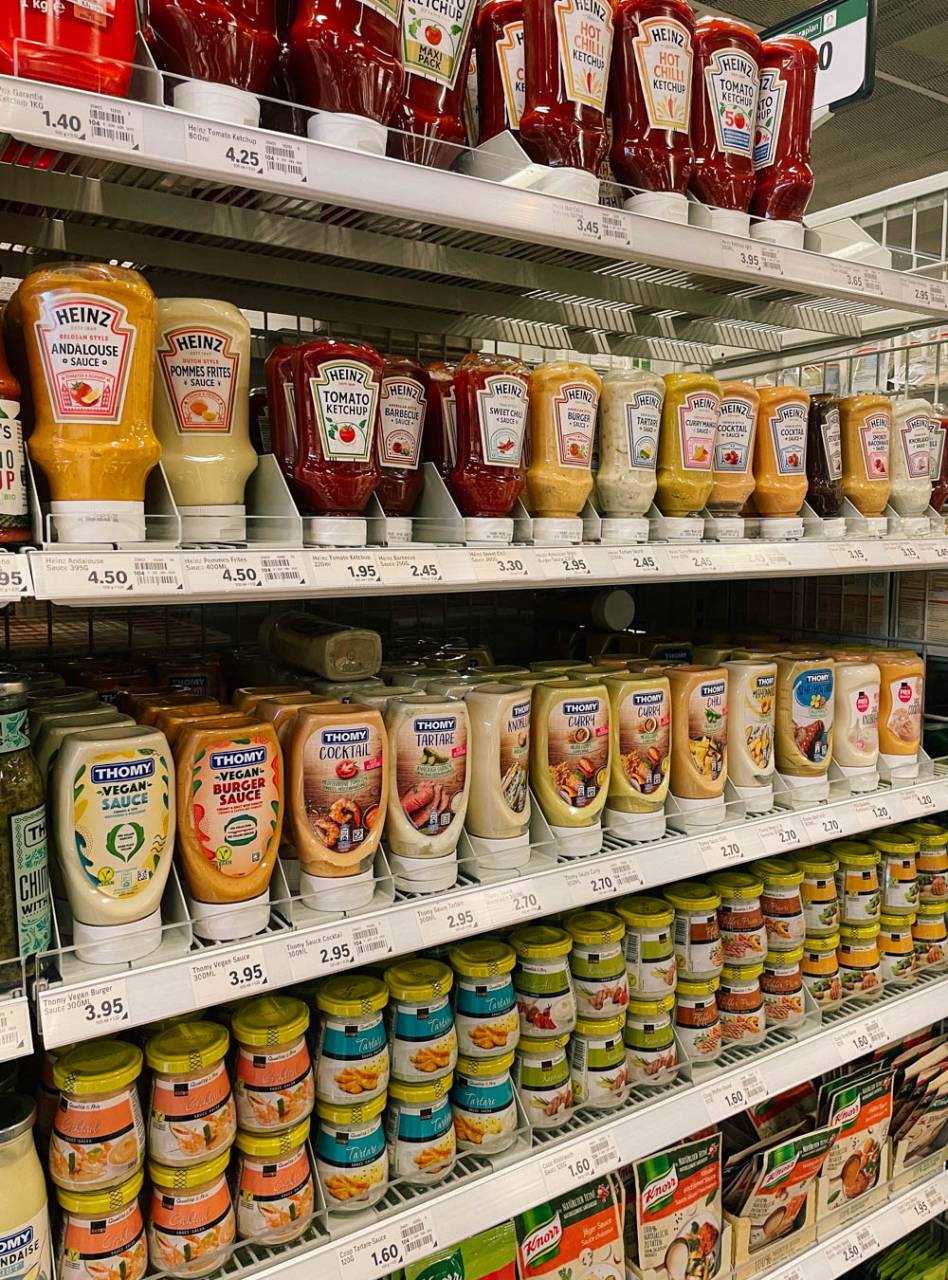 Perhaps this is something I just didn’t pay much attention to in the States, but sauces are a really big deal here. Heinz has a whole line that I have never seen, with all sorts of unique flavors like Sweet Chili and Curry Mango and even American-style (?) burger sauce. Maybe it’s because the food here is generally a bit bland (no shade!) so sauces are a way to jazz things up, but I am impressed by the range. There are even different flavors of mayonnaise!

But where the Swiss enjoy an endless variety of all of the above, sadly their cereal choice is lacking. It’s kind of a thing, getting overwhelmed in the cereal aisle of American grocery stores, right? There are endless varieties of Honey Bunches of Oats and Special K and there always seems to be some sort of new or special edition version of things. Here, you’re getting a handful of decidedly not-as-sweet options and a whole lot of müesli. Great for avoiding kid-drama in the grocery aisle, terrible for your sneaky post-bedtime snacking.

There Can Only Be One

Another thing that Swiss really don’t require a lot of choice on are chips. Why even entertain another flavor option when you have the god-level Paprika chip? I certainly do not agree with this and am missing my Zapps and the ultimate in chippery, the Sweet Maui Onion, but the Swiss are in a very, very deeply committed relationship with the Paprika chip.

Chocolate in Switzerland is not something to be truffled with. Ahem. I guess this is obvious, and of course you’ll find very large selections of candy and chocolate in any U.S. grocery store, but have you seen a wall of chocolate bars like this? Different intensities of cocoa, different infusions, fillings, flavors, dark, milk, white. It’s endless! Before moving here it didn’t really occur to me to keep bars of chocolate in the pantry but now it’s the standard item taking the place of the late-night cereal eating. 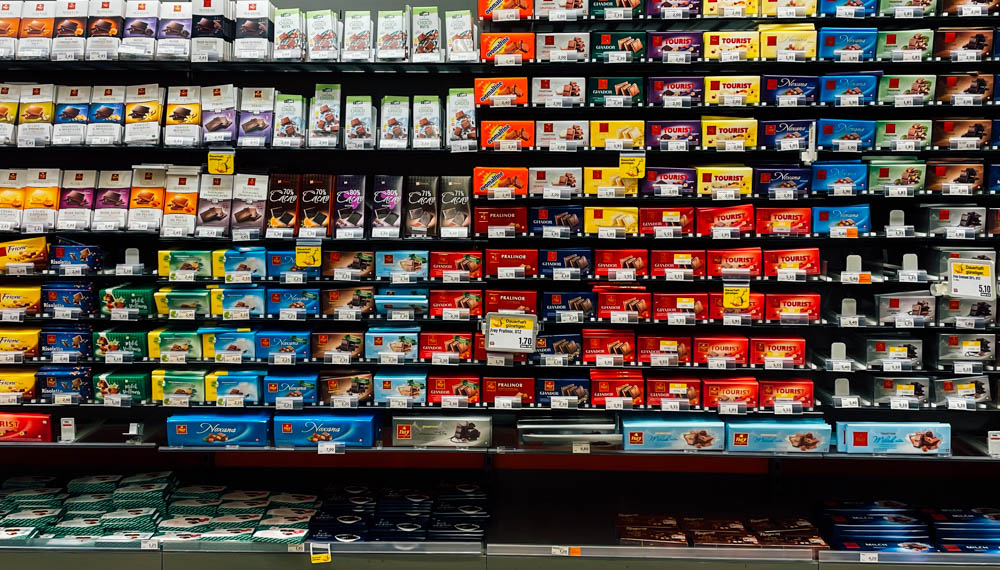 While the selection at Swiss grocery stores is certainly different from those in the U.S., the basics are generally the same. One thing that is vastly different and a difficult adjustment are the shopping hours. In the medium-sized city that we live in, grocery stores close daily at 7PM, 5PM on Saturdays, and are closed completely on Sunday. Those late-night, kid-free runs to the store? Nope. Not a thing. Need the weekend to catch up on errands? Better cram it all in on Saturday. You figure it out eventually, but for parents, especially working ones, this is a major difference from our late-night, 24hr culture in the States but is entirely reflective of Swiss culture.

Hope you enjoyed a little tour through a Swiss grocery store! Are you living abroad? What are some of your favorite things about your new home’s grocery culture? What about the most difficult?

7 Reasons Why You Need to Visit Switzerland in the Summer

Thinking Of Visiting Georgia? Travel To Armenia Instead! 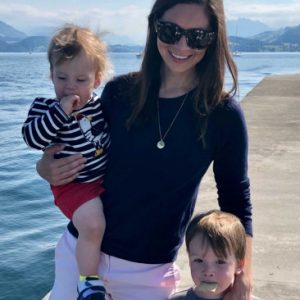 Kealan (preferred pronouns: she/her/her) is an editorial and social media contributor to Bébé Voyage. Born on the west coast but raised on the east; half Mexican and half Irish; a New Yorker who lived in Texas for a bit, and now married to a German guy, raising kind of American, kind of European sons in Switzerland. All of these experiences have contributed to a need to explore and be curious about the world. You can follow her on Instagram, @theamimommy
All Posts »
Become a member
PrevPreviousRaising Multilingual Children – When To Introduce Both Languages!
Next10 Water Safety Tips Every Family Needs to KnowNext