Family Air Passenger Rights– What You Need to Know

When traveling with a family, it’s important to have a strong backup plan if things go south. AirHelp is here to ensure that Family Air Passenger Rights aren’t infringed, and if they are, they’re here to fix it.

Family trips are a great opportunity to create lifetime memories. If your kids are old enough, they are likely to get excited about each stage of their journey. They’ll love everything from helping you choose their travel clothes to engrossing themselves in your holiday destination activities.

However, as family travelers know, there’s another side of the coin that’s not so much fun. Car breakdowns on the way to the airport, irritable babies – the need for octopus-limbs so you can carry your hand luggage, baby, toddler bag, and still have a hand free to check-in; these are all difficult problems. to begin with.

Add a flight disruption on top of that and your dream trip can quickly plummet into a ghastly nightmare.

The good news for families traveling with children is that you have air passenger rights when air travel goes wrong.

Because it’s important to know your rights before you travel, AirHelp has come up with the answers to parents’ commonly asked questions, and they can help you get cash compensation, should your family suffer a flight disruption.

Who is Entitled to Compensation when Families Travel?

The laws covering flight compensation are much stronger in Europe than in the U.S., so if you’re flying to the EU with a European airline, or departing from an EU airport, it’s better to claim under these laws.

Under the European legislation, EC 261, as long as the disruption is caused by the airline, each family member can receive compensation of up to $700. The flight issue can be a delay, cancellation or denied boarding.

Unfortunately, U.S. laws are not nearly so generous to families who have experienced flight disruption. According to the US Department of Transportation, “airlines are not required to compensate passengers when flights are delayed or canceled.  Compensation is required by U.S. law only when certain passengers are “bumped” from a flight that is oversold.”

It follows from this that in the U.S. whether you are traveling with children or not, you’ll only be entitled to cash compensation if you’ve paid for a seat on a plane but are denied boarding due to overbooking.

Each member of your family could be entitled to as much as $1,350 compensation if this does happen.

Are Children Entitled to Compensation?

According to E.U. legislation regulating air passenger rights, if your child is 2-years-old or older and you paid for a designated flight seat, you are able to claim compensation on your child’s behalf should your family suffer a flight inconvenience.

However, knowing about your air passenger rights is only half the battle when it comes to getting compensation to alleviate your flight woes. The next step is enforcing them. Many families end up not making a claim because they are put off by what they assume will be a long, stressful and complicated process.

This is where AirHelp comes in. We take the hassle out of claiming flight compensation. In the event of a flight being delayed, canceled or overbooked, our team of air passenger rights experts helps travelers get the compensation they deserve.

According to U.S. law, the only flight disruption that can be awarded compensation is denied boarding due to overbooking.

U.S. carriers generally require children who are 2 years old and up to have flight tickets.

Therefore, it follows from that, that if a family is traveling with a child that is 2 years old or above whose flight seat has been paid for, compensation can only be sought after on the child’s behalf if the flight issue is connected with denied boarding.

Are Babies Entitled to Compensation?

Unlike children over the age of 2, infants often don’t have a designated seat on a flight. Instead, they travel on a parent’s lap for a reduced infant fee. Airlines regularly charge a fee between 10 to 15% of the adult airfare. This can cover taxes and an extra seat belt for your toddler.

So does this mean babies are still eligible for compensation?

By and large, airlines don’t seem to think so. They often argue against paying out compensation to babies, on the grounds that infants don’t require their own seat while flying.

However, in 2017, AirHelp won a landmark against Thomas Cook Scandinavia A/S in Denmark. In this case, a family traveling with an infant under the age of 2 was able to receive $600 for a flight disruption.

This legal breakthrough in Denmark can now be used as a reference point for family compensation cases. Other EU courts should follow similar reasoning. They should allow families with infants under the age of 2 to claim compensation on their behalf, should they suffer a flight issue.

Under U.S. law, airlines will only pay out compensation for denied boarding due to overbooking.

What are Your Rights if an Airline Damages Your Luggage?

Family travelers are likely to check in luggage like a stroller, crib, playpen or car seat when they fly.

In the event of your luggage arriving at your destination damaged, delayed or lost, you have rights under the Montreal Convention.

This regulation protects air passengers from more than 130 participating countries (which includes the U.S. and European nations).

It’s worth mentioning that if your luggage is delayed you can also claim for the expenses incurred as a result. For example, buying a replacement infant carrier when yours does not arrive at the airport on time.

Under the Montreal Convention, the maximum compensation travelers can get for lost, delayed, damaged luggage is about $1,500. For U.S. domestic flights the limit is about $3,500.

The process to claim your luggage compensation involves doing certain things before you leave the airport like filling out a Property Irregularity Report. It’s important that you know what to do and when. 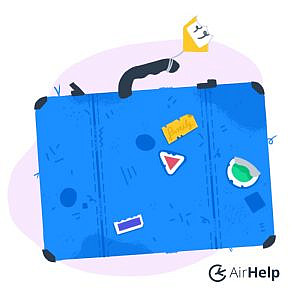 To read more about this, read our guide on how to claim airline compensation for lost or delayed luggage.

Family travel has its pain and pleasures. However, knowing your air passenger rights is one less pain you have to worry about.

Your problems may vary–from suffering a flight inconvenience or arriving at your final destination to discover your stroller is banged up. Knowing what to do at the right time will stand you in good stead to get the compensation you deserve.

(she/her/hers) Marianne is Bébé Voyage's co-founder and CEO. Born with 3 passports and with friends and family around the world, it's not surprising that she's always been a traveler. And it didn't stop when she had kids. Her first son was born in Stockholm, Sweden. At 6-weeks he flew to Paris to visit family, before moving to Mozambique a week later. That's how Bébé Voyage started...
All Posts »
Become a member
PrevPreviousBeaches Turks & Caicos All Inclusive Resort Review: Visiting with a Toddler
NextA Day in the Life of a Mom in Orlando, FloridaNext