Family Travel Advice > Göreme National Park And The Rock Sites Of Cappadocia: A Unesco Site Straight Out Of A Fairy Tale

Göreme National Park And The Rock Sites Of Cappadocia: A Unesco Site Straight Out Of A Fairy Tale

In the Anatolian region of Turkey lies an otherworldly landscape that captivates travelers with both its spectacular views and its rich history. Göreme National Park and the Rock Sites of Cappadocia were given the Unesco World Heritage designation in 1985 and it’s easy to see why. Visitors will be in awe of the fairy chimneys that reach heights of 130 ft and resemble rocket ships awaiting launch. The underground cities, where entire civilizations lived, will send your kids squealing with delight through the tunnels of the past. And the hot air balloons floating dreamily over the rock formations every morning at sunrise is a sight unlike any other on Earth. 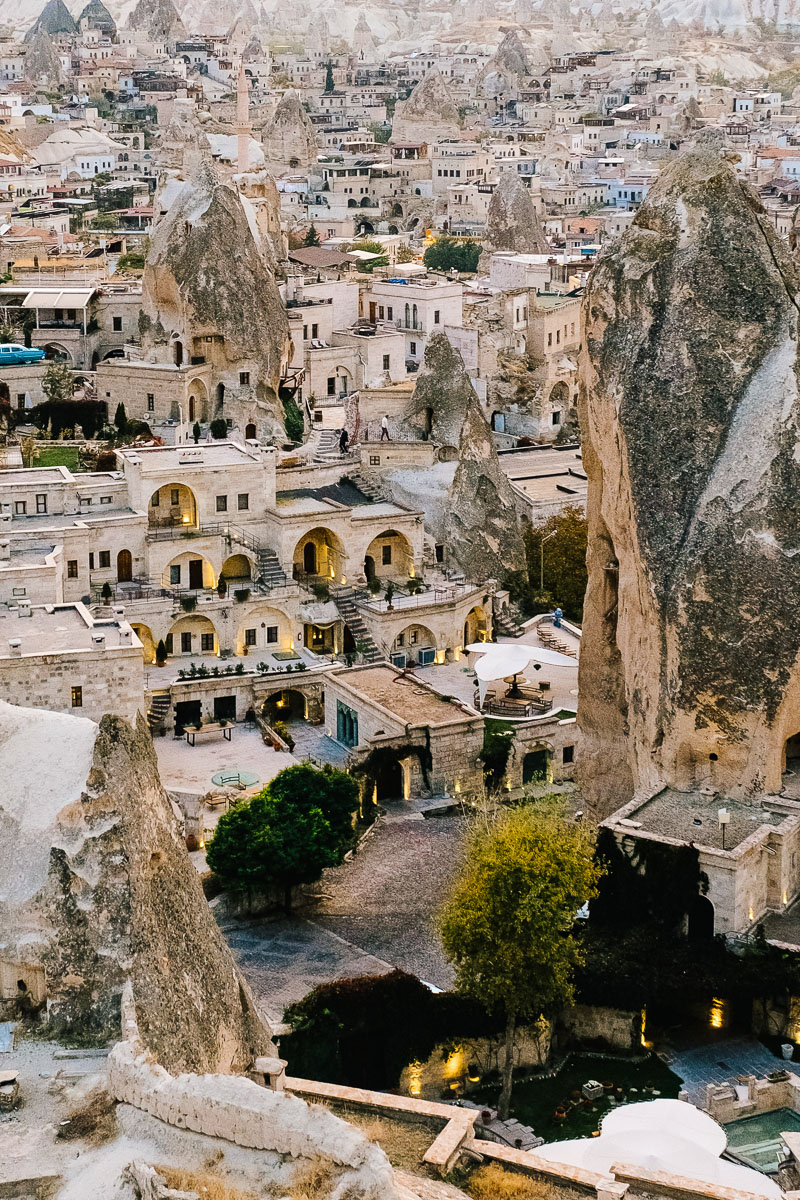 Like so many other extreme landscapes around the world, the area around Cappadocia was formed by volcanic activity. Around 60 million years ago, ash rained down on the area where it then condensed and turned into a soft porous material called tuff. After thousands of years of weathering and erosion, the spires and valleys we see today were formed.

Cappadocia also has a storied past of human civilizations dating back thousands of years. Due to its location, the region often found itself at the crossroads of different cultures and religions and would be subject to attack by the surrounding empires. The people who inhabited the area used the soft porous tuff to their advantage and built entire cities underground in order to hide from invaders and religious persecution. These cities, resembling giant ant nests, had churches, schools, living quarters, cellars, food stores, stables, and cooking areas. They were truly secret underground societies housing up to as many as 20,000 inhabitants and going as deep as 200 feet. These cities were forgotten about in the early 1900s after their use was no longer needed; however in 1963 they were rediscovered after a resident of Cappadocia found an entrance behind a wall in his home. The rest, as they say, is history! 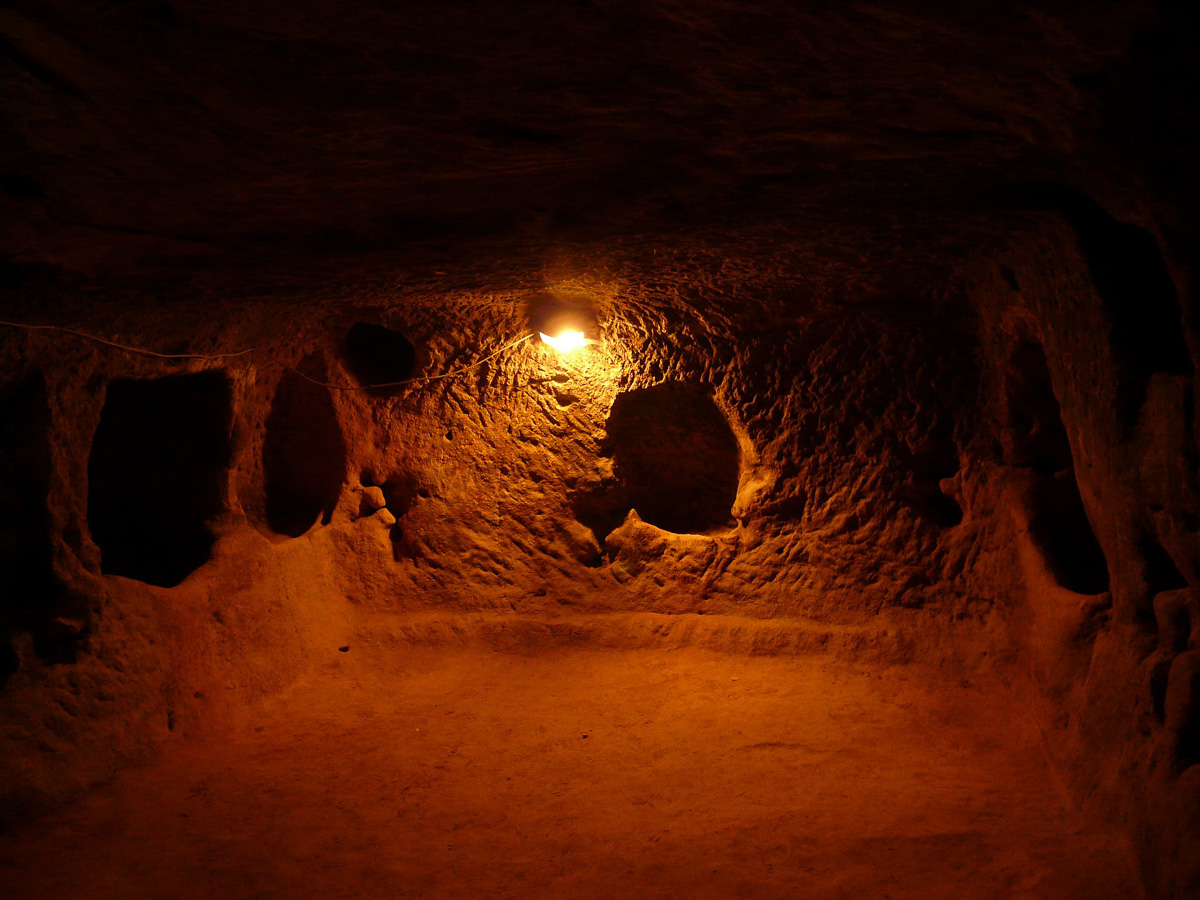 The two famous underground cities in Cappadocia are Kaymakli and Derinkuyu. Both are open to tour and provide a fascinating history lesson for adults and kids alike. Be warned, however, that this is not the place to visit if you are claustrophobic as there are many tight squeezes and low hanging ceilings. At some points, you even have to crawl in order to get through! It is great fun for the kids to explore the different passages and rooms but it could be difficult if you are carrying a baby. Kaymakli is wider and more spread out than Derinkuyu so it might be a better option if you have younger kids. The honeycomb-like cities will definitely get their imagination flowing and you are sure to be asked a million questions during your visit! 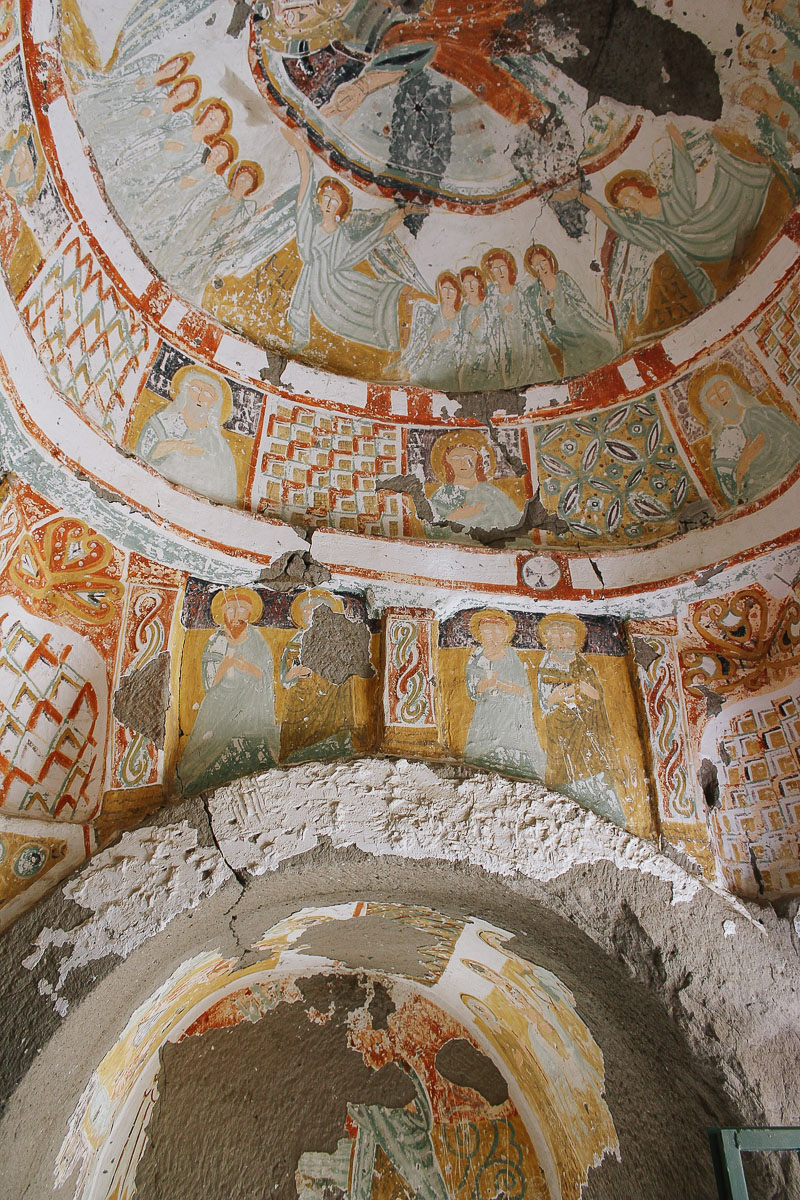 Once above ground (and most likely craving some fresh air), be sure to check out the Göreme open-air museum. Once a Byzantine monastic settlement, it has ten cave churches that are dug into the soft rock. The Dark Church is the most famous of the ten and does require an additional entrance fee; however, it is well worth the price. The frescoes painted on the walls in this church date back to the 11th century and are some of the most well-preserved in the entire region. And believe it or not, we actually have pigeons to thank for that. After the settlement was uninhabited, pigeons found the church and used it as their home. Hundreds of years of bird droppings covered the church and the frescoes inside. It is believed that their droppings were actually responsible for preserving the frescoes underneath. After 14 YEARS of cleaning the walls, a historical treasure of epic proportions was found. What better way to teach your kids about history than to talk about poop!?

No trip to Cappadocia is complete without staying at least one night in a cave hotel! The kids will get a kick out of these amazing rooms carved directly into the rock. There are literally hundreds in the area, but be sure to check the reviews in regards to kid-friendliness. Some of them have pretty steep steps leading up to the room as well as narrow walkways. Argos In Cappadocia and Hermes Cave Hotel both get high ratings for families, but with a wide variety of different types of accommodations, there is sure to be a fun place to stay for everyone. 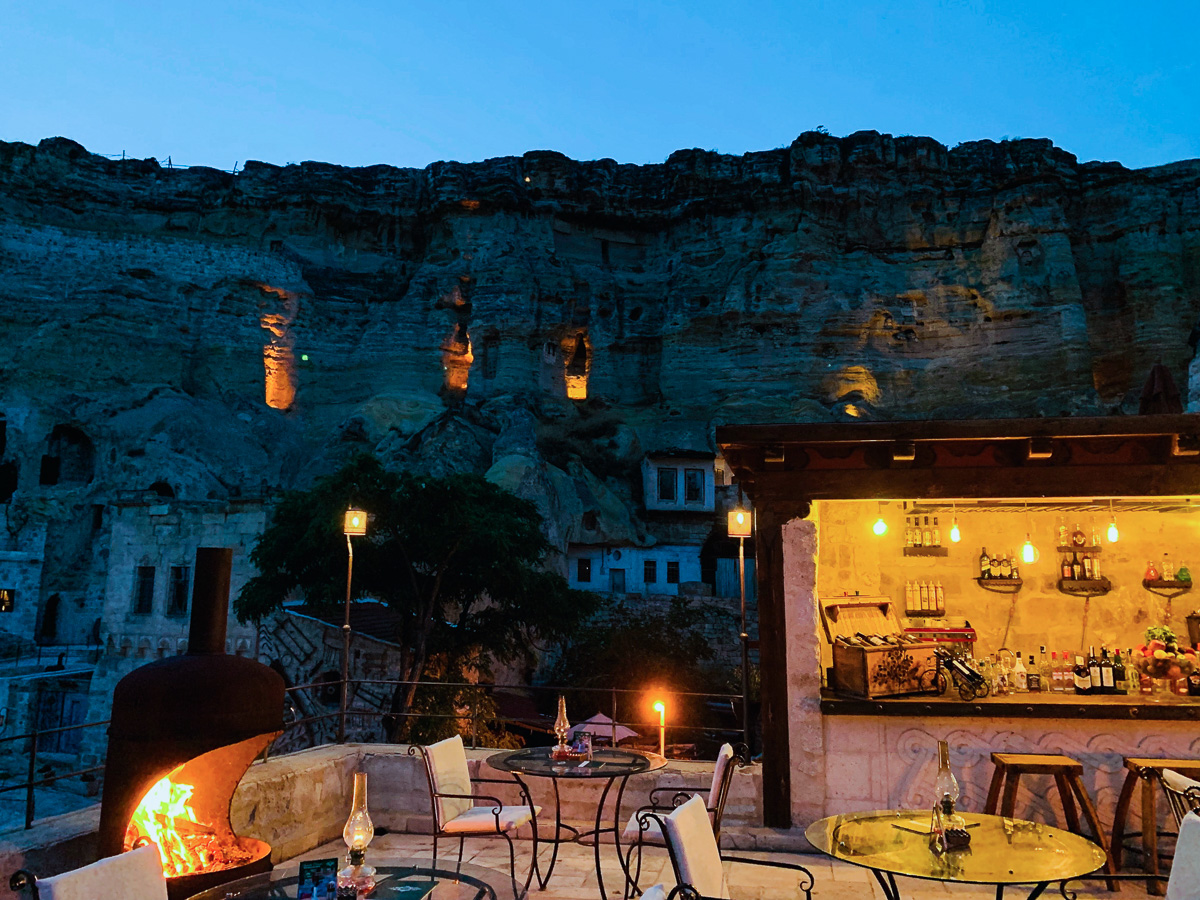 The thrill of riding in a hot air balloon is something everyone should experience at least once. However, the youngest in the crew will unfortunately have to wait for their chance until they are a little older. For both safety reasons and because they will not be able to see over the basket, most tour companies have a minimum age limit of at least 5. That doesn’t mean you can’t enjoy this experience with your older kids though! Just warn them that it is an extremely early wake-up! The balloons take off at dawn, and as the sun comes up, the surrounding rock turns magnificent shades of red, orange, and golden hues. This will definitely be one of the highlights of your trip. Book early if you want to do this though as these tours can fill up in peak summer months. 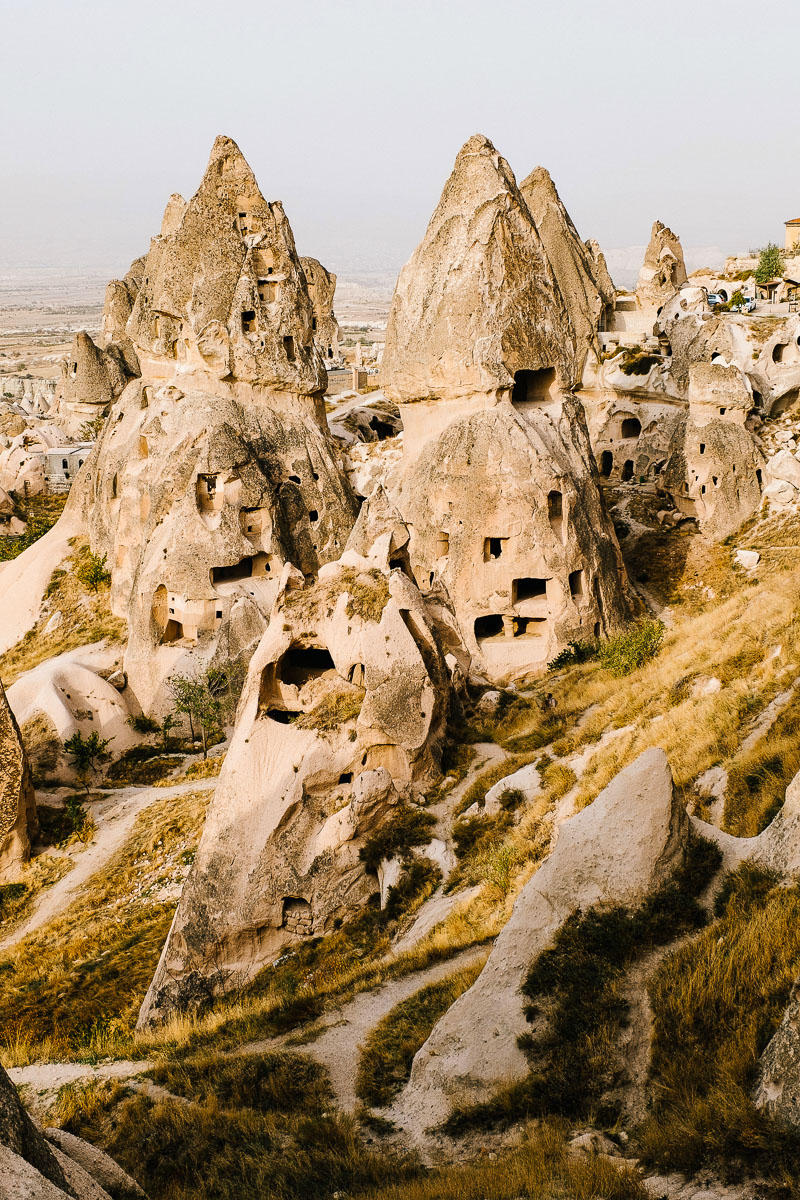 Mankind and nature don’t always get along. And yet, sometimes their union comes together so serendipitously you would think it had actually been planned. The geological formation of this area allowed civilizations for hundreds of years to not only survive but thrive. The secrets of the people it hid and protected will forever live amongst the fairy chimneys and hollowed-out rock. But visiting and learning about the region’s past will give you a small glimpse into that world. Göreme National Park and the Rock Sites of Cappadocia will leave you in awe of the ingenuity of both people and of nature itself.

(She/Her) Kelly is the Director of Content for Bébé Voyage and enjoys traveling the world with her husband and two boys. A self-described travel junkie, she prefers to visit the "real" parts of a destination, rather than the more popular touristy areas. Always on the hunt for local restaurants and off the beaten path shops that most tourists never find.
All Posts »
Become a member
PrevPreviousPlanning An End Of Summer Family Road Trip? Here Are Our Top Safety Tips!!
NextTake A Tour Around Atlanta With Bébé Voyage Ambassador Caroline EarleNext