Departing 4th February from London Heathrow, destination Bali on Singapore Airlines.  This is the 1st leg of our around the world adventure to be followed by Sydney, with Jet Star on 10th February, and Los Angeles, with United on 19th February, returning to London on 29th February with Air New Zealand.
We stayed in hotels in Bali (Canggu and Ubud), with friends in Sydney, and family and friends in LA.  We also did a five-day road-trip from LA to Napa staying in different hotels every night.

I definitely felt as though I brought way more than I, alone, should be carrying, but I really didn’t know what to expect and I did end up using everything I took. 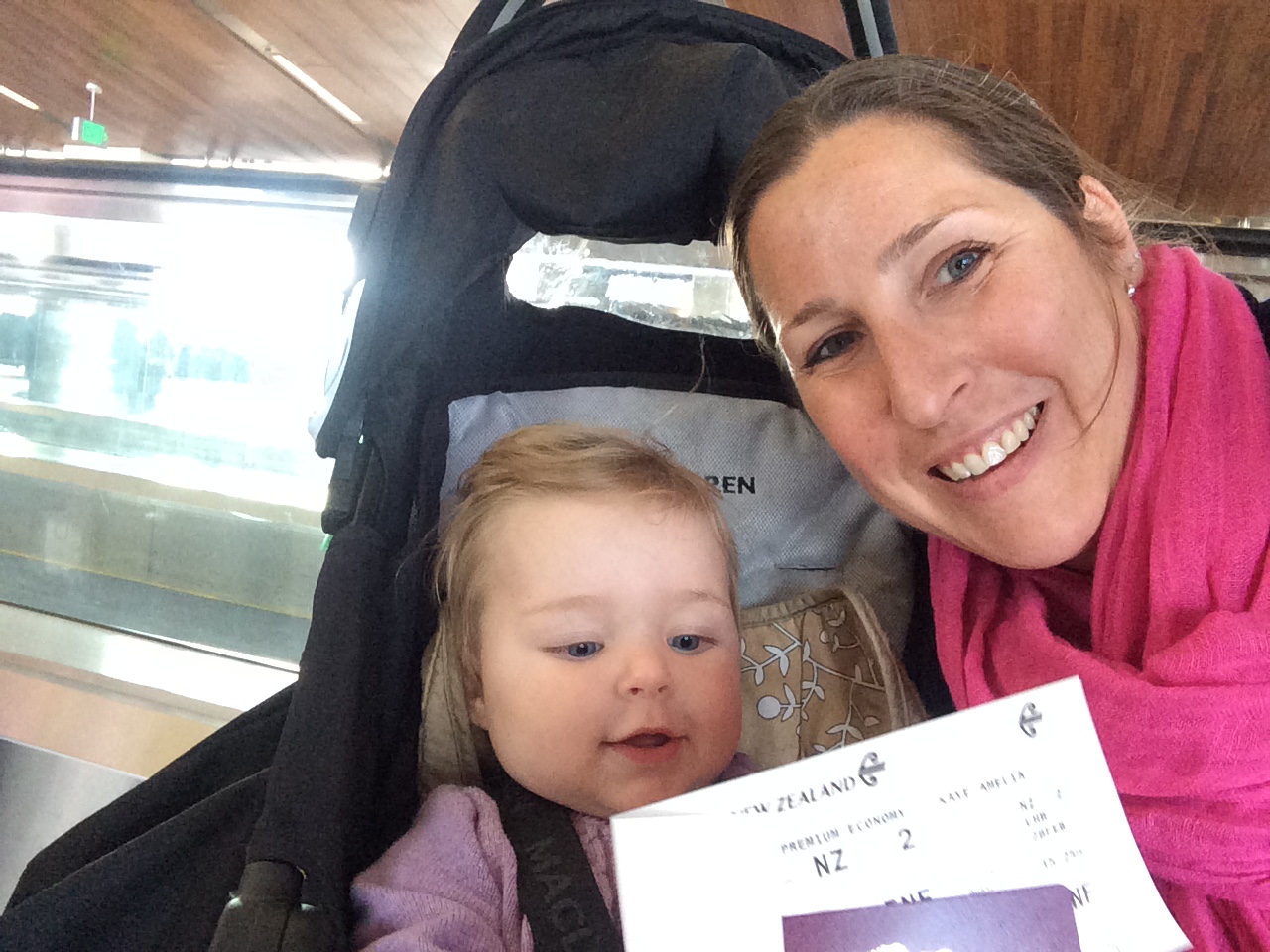 Stroller – MacLaren Quest – loved it.  Full recline, good even on bad streets (Bali), easy to fold even with one hand.  The sunshade on it isn’t brilliant so I also took a Diono Universal Sunshade which was fantastic – super easy to use, collapses into a small bag for easy carrying when not in use and was probably the most useful thing I had.

i-Safe Universal stroller holder, a large black-bag, slightly akin to a body bag!  It was great and I stashed quite a few things in there along the way but really it was too big and cumbersome as I had to have it with me up until boarding so was a bit of a pain.  That said, it hid our winter coats, pack of nappies, a teddy-bear gift given on route, the sunshade, mosquito net and pram fan…. So while very useful, I wouldn’t take it again.  It also meant the pram was mistaken for luggage and in Singapore didn’t arrive to the gate.  Luckily, they have airport prams at the Singapore airport, as we had a three hour wait and I couldn’t have carried Amelia for that long.

Hand luggage back-pack always had all her formula and food, change of clothes for both of us, meds bag, sleep-suit, Grobag and blanket for her, toiletries and kindle for me (which I didn’t look at once on any of the flights!).

Nappy bag – Pacapod bag, one nappies pod, one food pod which always had three made up bottles and a few snacks and all her toys in another section.

I didn’t take a carseat – I held Amelia on my lap in Bali, Sydney was all public transport or taxis with carseats and I hired a car in LA with a carseat.  I also didn’t take a sling for Amelia as I’ve had back problems since the pregnancy. 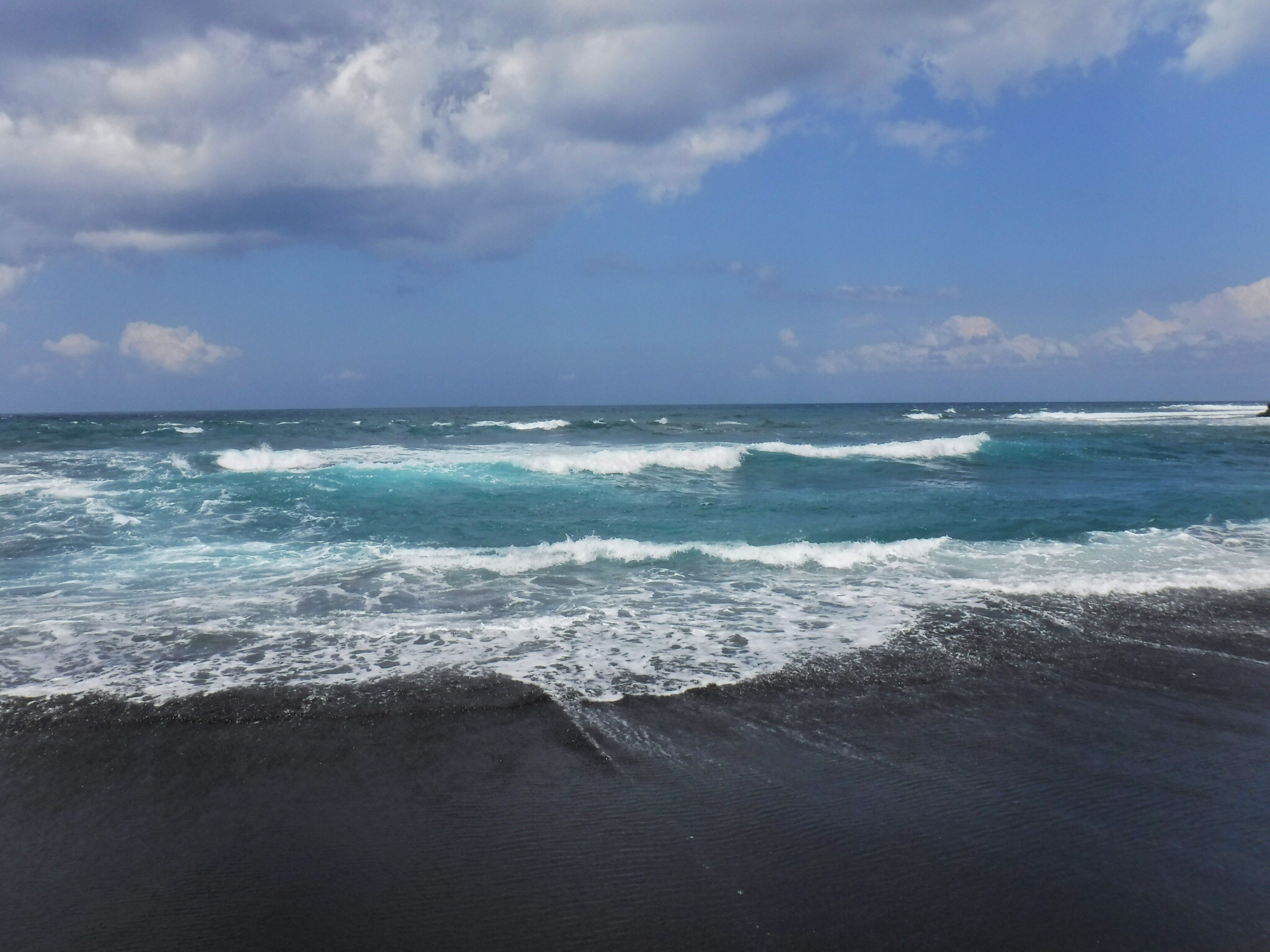 Singapore Airlines – London to Singapore, 12 hours, day flight – the crew could not be more baby-friendly and accommodating.  I had the bassinet seat booked, months in advance. 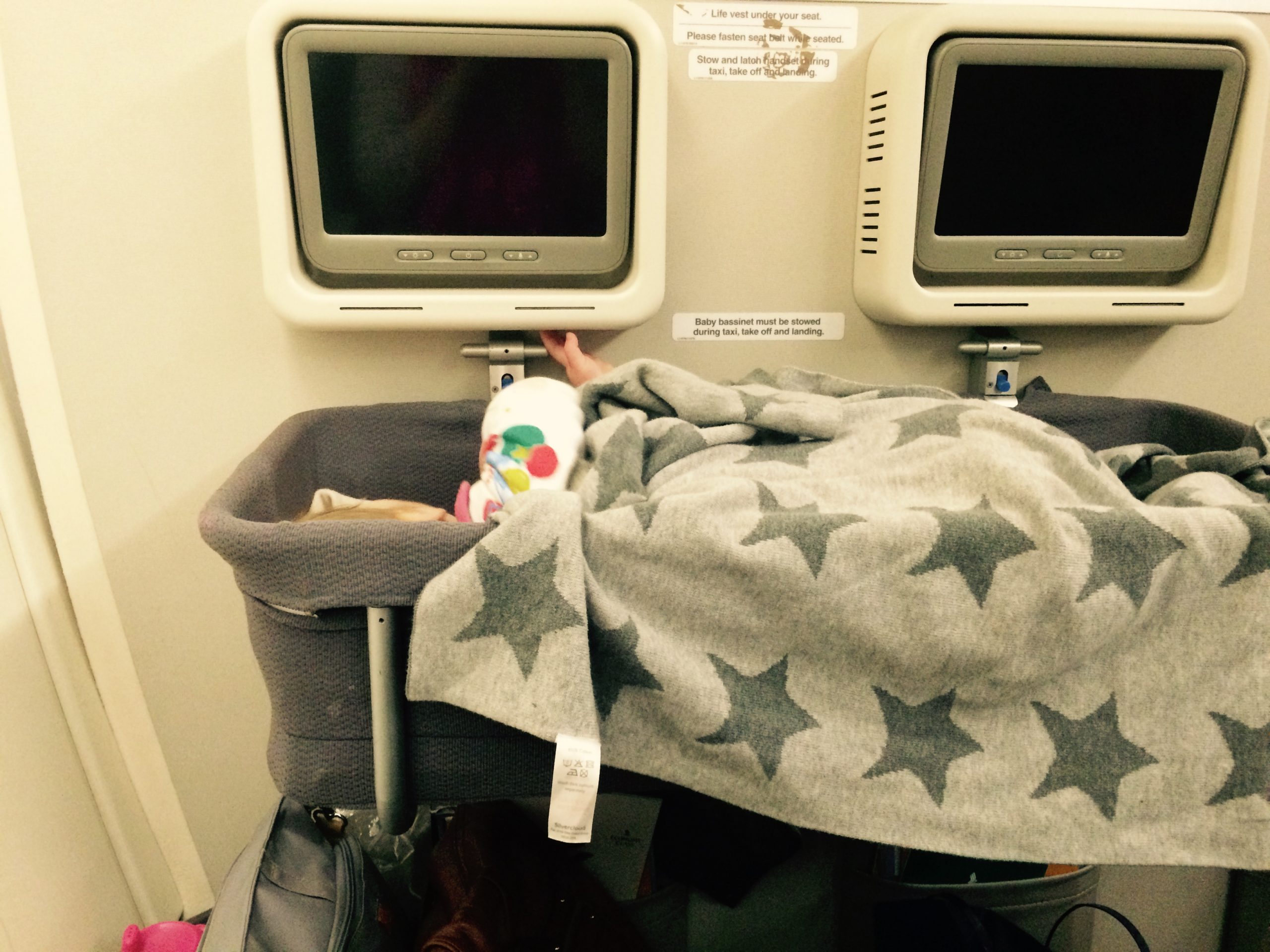 I sat in the window seat, and luckily scored an empty seat next to me, which my near neighbour didn’t mind me commandeering.  This allowed Amelia to have her ‘bed’ and somewhere else to sit and eat which wasn’t on my lap.
Although I’d ordered a post-weaning meal (who knew!), this hadn’t been passed on to the airline – we were instead provided with a bag of puree products, fruit and rusks.  Amelia wasn’t weaned on purees so luckily they happily supplied ‘spare’ proper meals and at times I asked for them.
A crew member checked in on us regularly and offered to sit with Amelia so that I could have bathroom breaks.
Garuda – Singapore to Bali, three-hour day flight – friendly, easy.  This was a short day flight, so I didn”t request the bassinet though were in the seats for it. In retrospect, I would have asked for the bassinet to be installed, as there was nowhere to put Amelia when I wanted to eat or drink something.
Jet Star – Bali to Sydney, six-hour night flight. The crew was as polite as they needed to be, however I wouldn’t recommend the airline as particularly baby-friendly.  I’m not sure what the rules or restrictions might be with regards to crew and babies, but this is the only flight in which I asked a crew member to hold Amelia so that I could use the bathroom and was told no. 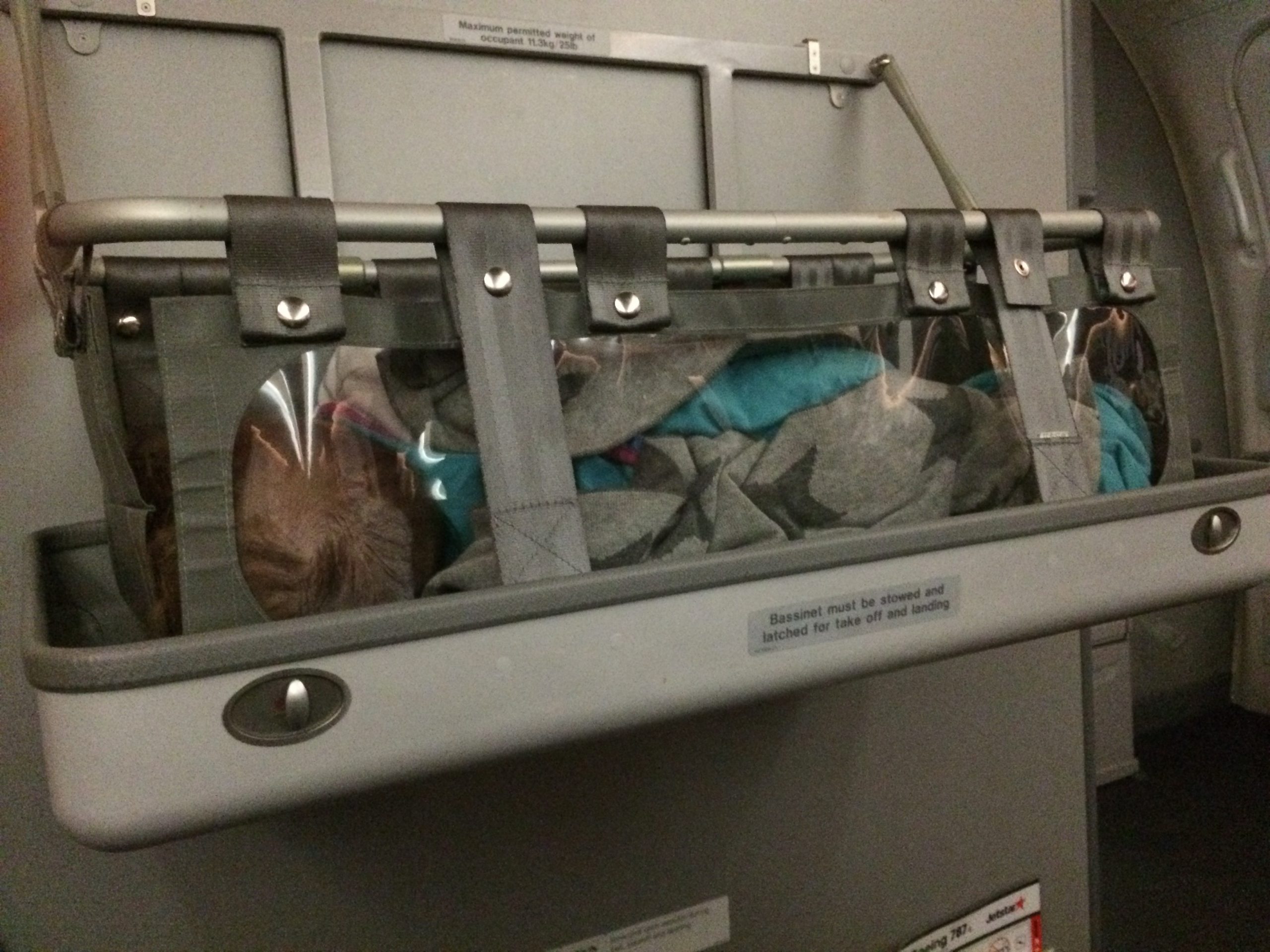 We did use the bassinet which was a plastic one, no matt, no covers, definitely no frills, but Amelia did sleep in it so I can’t complain.
On a side note, the plane was absolutely freezing though and when I asked for a blanket, I was told “That will be $10”.  Nice.
United – Sydney to LA, 14-hour, day flight – the bassinet seat is in premium economy, and as it happened, the section was half empty so I actually had the entire bassinet row to myself. 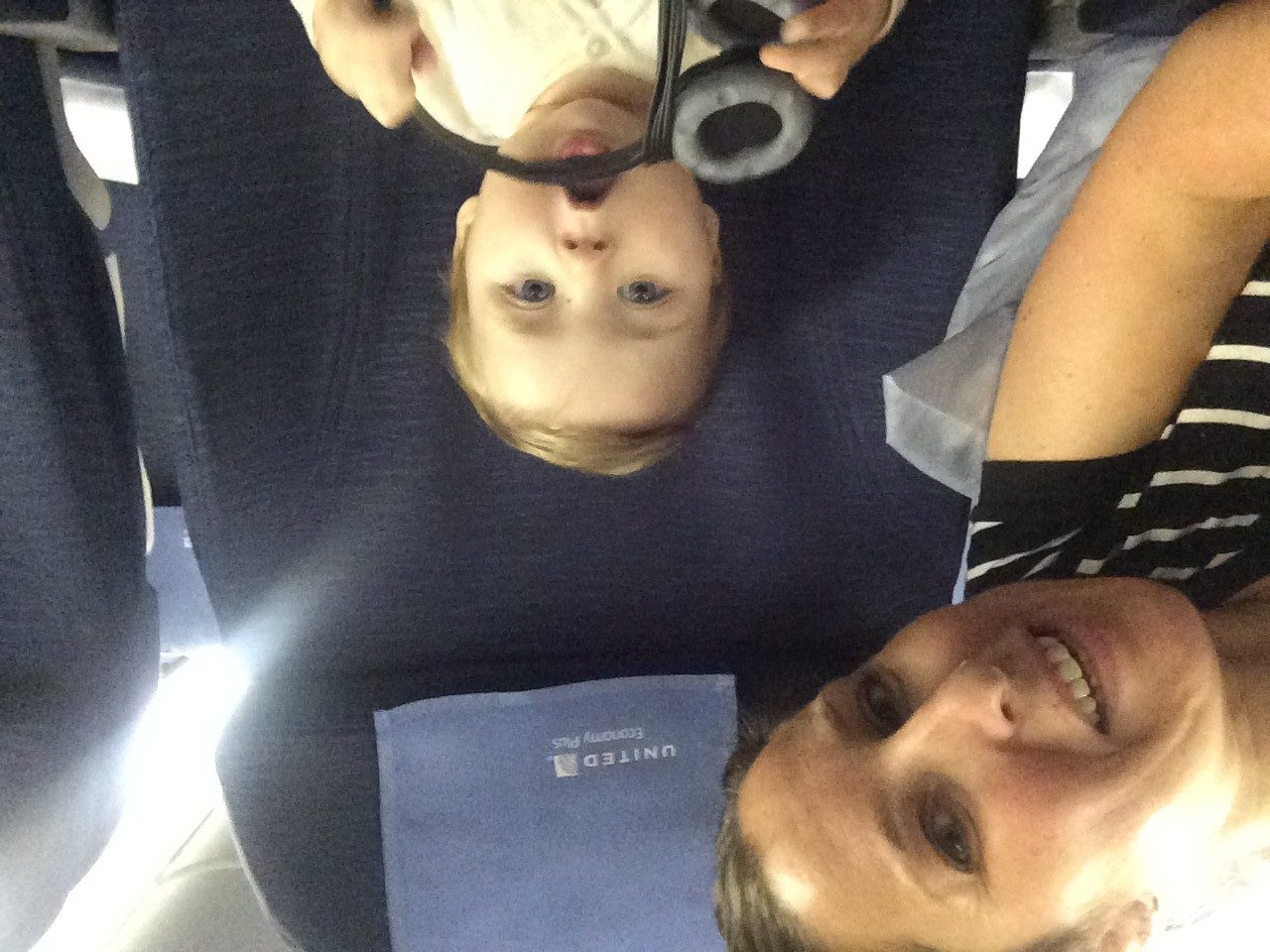 The crew was lovely and friendly. Two crew members in particular seemed very taken with Amelia and had no problems taking her for a hold.  The bassinet seemed larger than those on Singapore Airlines and Jet Star and Amelia slept comfortably. 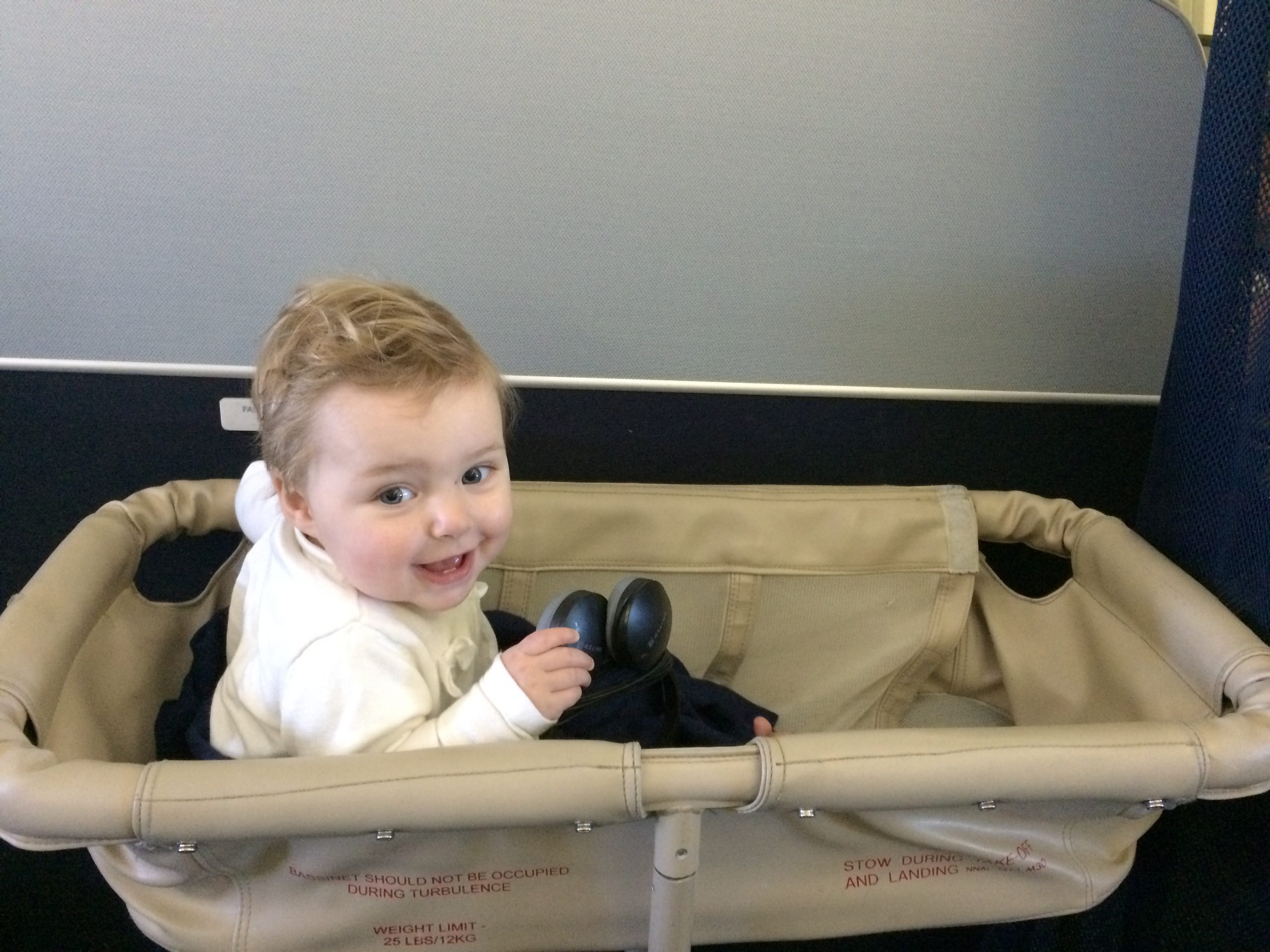 I was slightly perplexed when preparing for take-off, however, to be told that the airline does not give out child belts, as I’d had on all other flights, and that it’s safer to be held by the mother.  As well as the flights on this trip, we’ve taken three other trips and always been given belts.
Air New Zealand – LA to London, 13-hour day flight. I had booked Premium Economy for the ride home, and the bassinet seat. 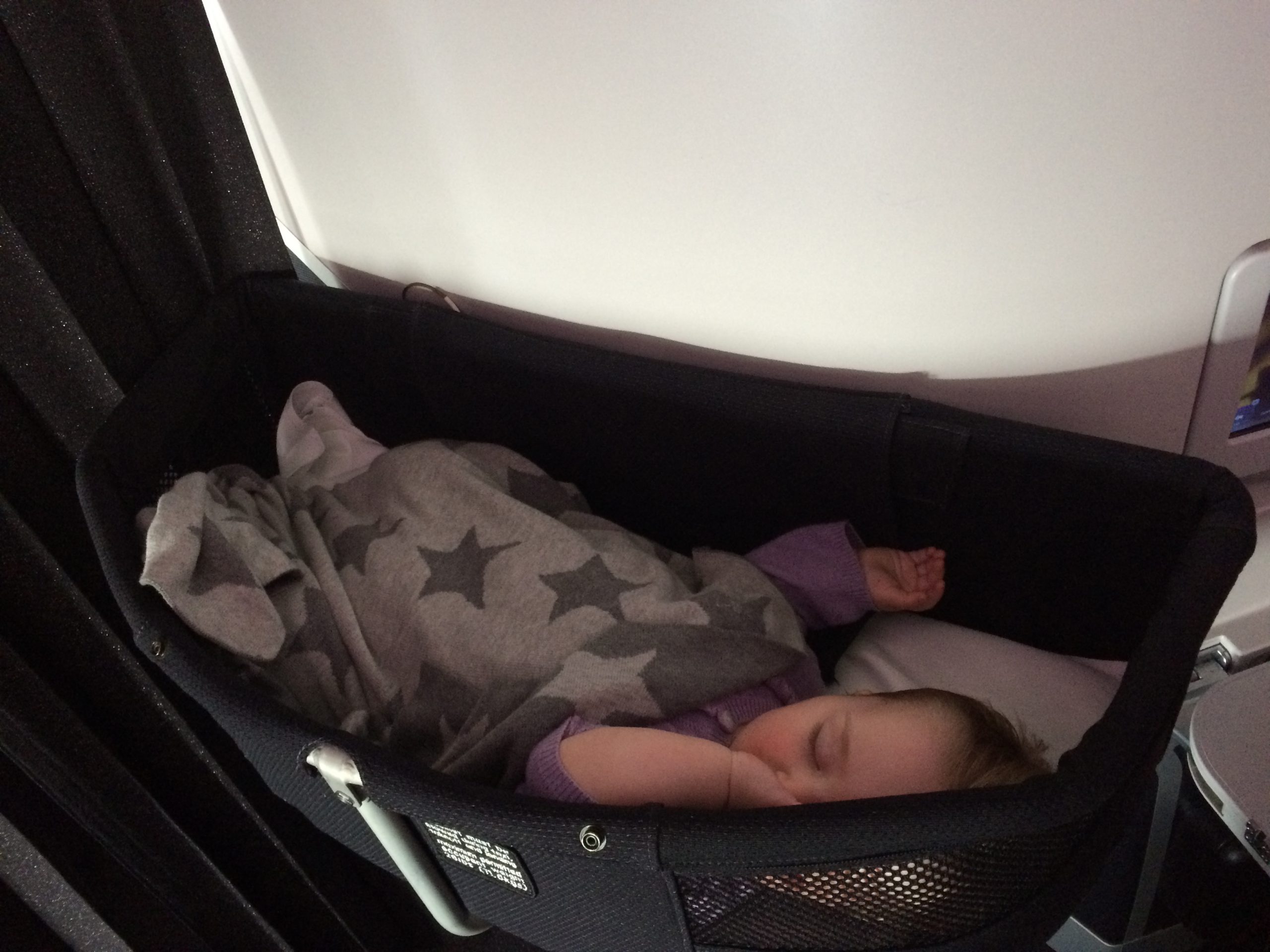 The bassinet is on a curved wall and quite high up so wasn’t great for trying to get her in once she fell asleep on me nor for keeping an eye on her.  The bassinet is also curved so the head and feet head is narrower, which for this baby was not particularly comfortable.  Unlike the other airlines policy with bassinets, Air New Zealand states that as long as the bassinet cover is clipped in over the baby, the baby can stay in during turbulence. 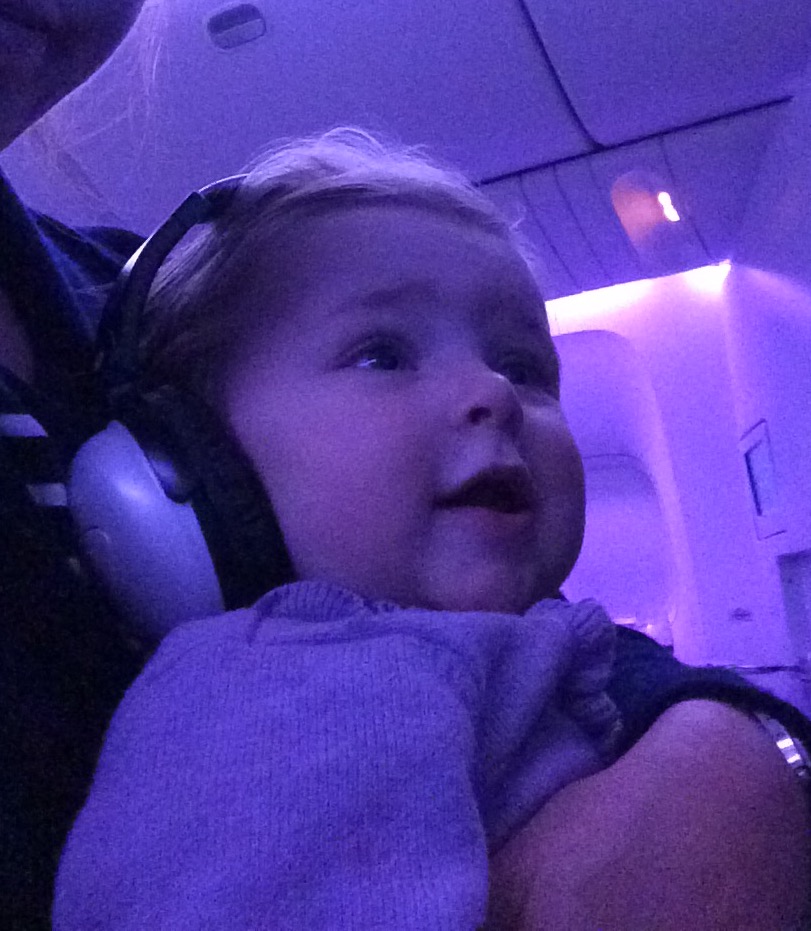 This was the only flight that Amelia was unwell, cried, and as a result she spent most of ‘sleep time’ on my lap.  The staff were fine, but didn’t do any more than they needed to. I once again had a wonderful neighbour who offered to have Amelia sleep across our seats and look after her if I needed the bathroom.

I didn’t pay any attention to the times of the flights when I made the bookings.  Luckily, they all actually worked out quite well.
On the whole, we were taking off late morning with arrivals the following mornings.  I would breast-feed Amelia for take-off, by which time she’d usually have a nap after all the airport excitement.
I then pretty much followed her normal routine and would make sure that six-ish hours in, I’d put her to bed so she’d have five-ish hours sleep ahead of waking up for breakfast and to start the day.
Admittedly, it was nowhere near her normal 11 hours sleep. However with a couple of longer naps on the day of arrival, she was always tip top and adapted really well and quickly at each destination, better than her mother!

Bali is super baby friendly, the locals love them!
I did have to take A to a doctor in Bali, on our day of departure to Sydney, and for 300k RP he told me A had heat-rash.  On arrival in Sydney I saw my cousin who is a pediatrician who told me she was in fact at the tail-end of hand, foot and mouth.  I wouldn’t trust the doctors there again.
Sydney and LA are cities, people are more or less baby-friendly depending on their mood, and the baby.

What have I learned:

I need to minimise the amount of c*!p I take with me!  Too many bags.
Travelling with baby is not as difficult or stressful as I expected at all and I actually really enjoyed it.
You don’t need to schlepp the exact formula around – I ended up buying different formula in Sydney and LA and Amelia didn’t seem to give a hoot.
It’s definitely easier if the baby is on solids (Amelia was baby-led weaned so on solids from 5 months).
In my experience with my baby, it didn’t matter where we were, who we were staying with, what the cot/bassinet/car/plane was like, if I was there then she was OK and adapted to every new surrounding amazingly well.
Facebook
Twitter
LinkedIn
Pinterest

All Posts »
Become a member
PrevPrevious13 tips that helped us on our first international trip with a toddler!
NextSheryl-Lyn: How this Mom Traveled Pregnant With her Toddler to JapanNext