Family Travel Advice > How To Acknowledge And Honor Indigenous Land

How To Acknowledge And Honor Indigenous Land

And it is true that most or perhaps all Native Americans see the entire universe as being alive—that is, as having movement and an ability to act. But more than that, indigenous Americans tend to see this living world as a fantastic and beautiful creation engendering extremely powerful feelings of gratitude and indebtedness, obliging us to behave as if we are related to one another.

For thousands of years in North America—Turtle Island, as many Indigenous nations call the continent—Indigenous peoples lived in symbiosis with the land, the sea, the waterways, and the lifeforms therein. What they built was much more than the “uninhabited wilderness” myth advertised by European “explorers” of the time and in history books today.

“By the time of European invasions,” wrote Roxane Dunbar-Ortiz in An Indigenous People’s History of the United States, “Indigenous peoples had occupied and shaped every part of the Americas, established extensive trade networks and roads, and were sustaining their populations by adapting to specific natural environments, but they also adapted nature to suit human ends.”

With the Europeans arrived the capitalist perspective of land as a personal possession or private property, a new concept of land occupation and management. The United States government, then, systematically used the theft of land (in the name of capitalism) and the destruction of crops and livestock as a weapon to exterminate Indigenous people and cultures.

That history of land theft and violence is present everywhere on North American soil today. Yet, because of the national narratives that have erased Native people and cultures, most non-Native people (settler-colonizers) don’t know or acknowledge where they are and whose land they occupy and play on.

Fortunately, that is slowly changing in North America through movements like Honor Native Land and through activism and work from Indigenous groups all over the continent. 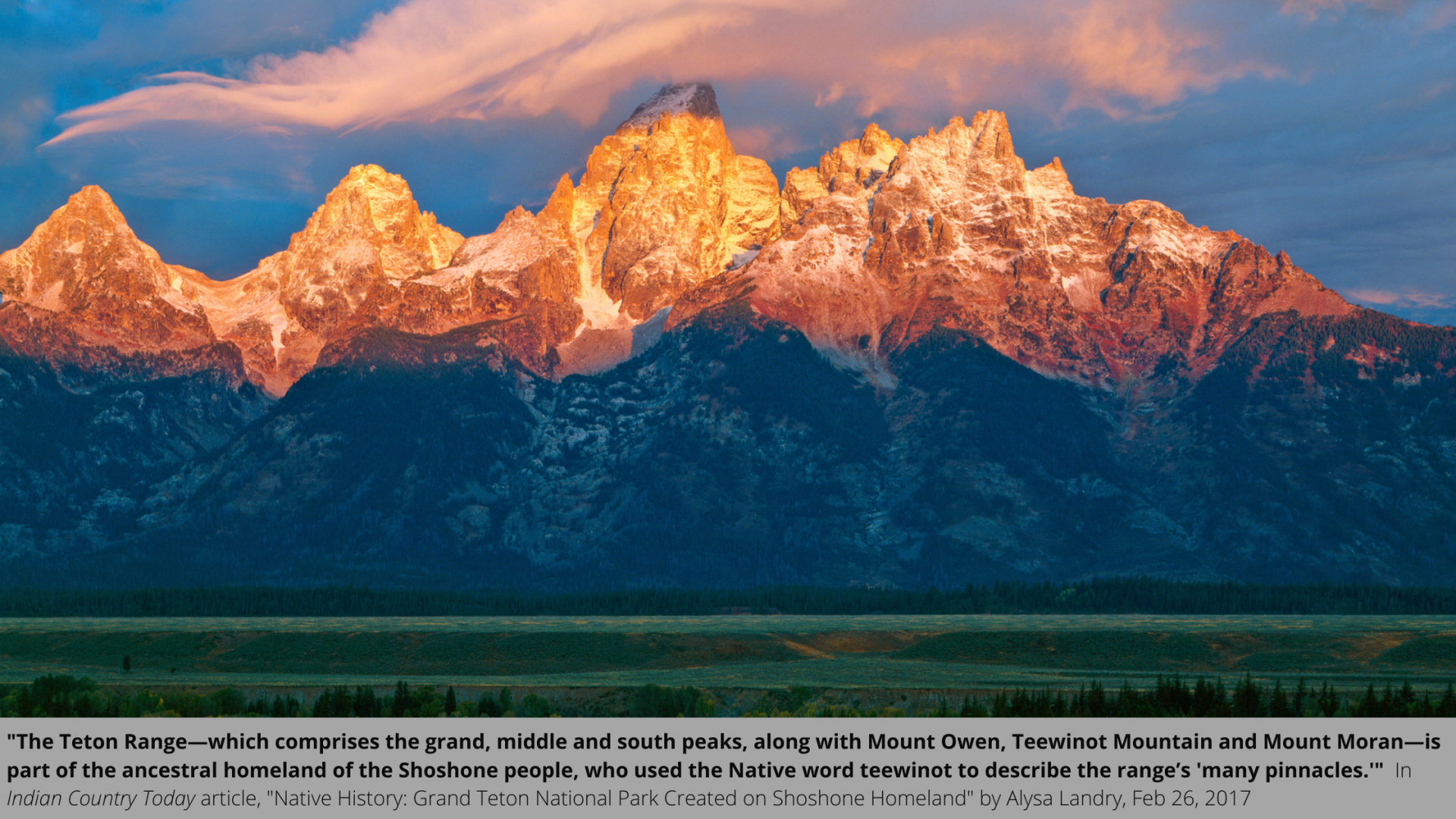 What is Indigenous Land Acknowledgement

Indigenous or Native land acknowledgements are, simply, recognizing and honoring whose land you’re on.

The U.S Department of Arts and Culture (USDAC) notes that “acknowledgment is a simple, powerful way of showing respect and a step toward correcting the stories and practices that erase Indigenous people’s history and culture and toward inviting and honoring the truth” in their Honor Native Land guide.

Land acknowledgement by itself is not enough, though. It’s a starting point for real learning and action. Read on to learn about how to integrate land acknowledgements into your travel and everyday life while also putting actions behind the words.

Where to Acknowledge Indigenous Land

Acknowledging the land you’re on could be as simple as taking a moment of pause to honor and remember the Indigenous people who stewarded that place when taking in a beautiful landscape. But bringing acknowledgements into formal gatherings, meetings, your everyday life and travels, creates an even broader space for respect and honor.

It’s important to note that research should go into every land acknowledgement. If you plan to integrate these into your travels, your work, and everyday lives, please also keep the tips in the next section in mind.

Delivering a meaningful land acknowledgement at the opening of an event or meeting creates a space for respect and inclusivity. The USDAC Honor Native Land guide offers a beautiful vision of what this can look like if the practice is adopted widely:

“Imagine cultural venues, classrooms, conference settings, places of worship, sports stadiums, and town halls, acknowledging traditional lands. Millions would be exposed—many for the first time—to the names of the traditional Indigenous inhabitants of the lands they are on, inspiring them to ongoing awareness and action.”

In addition to a formal land acknowledgement, invite attendees while introducing themselves, to also acknowledge the land they are on especially during video conferences where attendees are dispersed. You can utilize the Native Land app* as a resource and watch the Honor Native Land video to understand the importance of such acknowledgements. 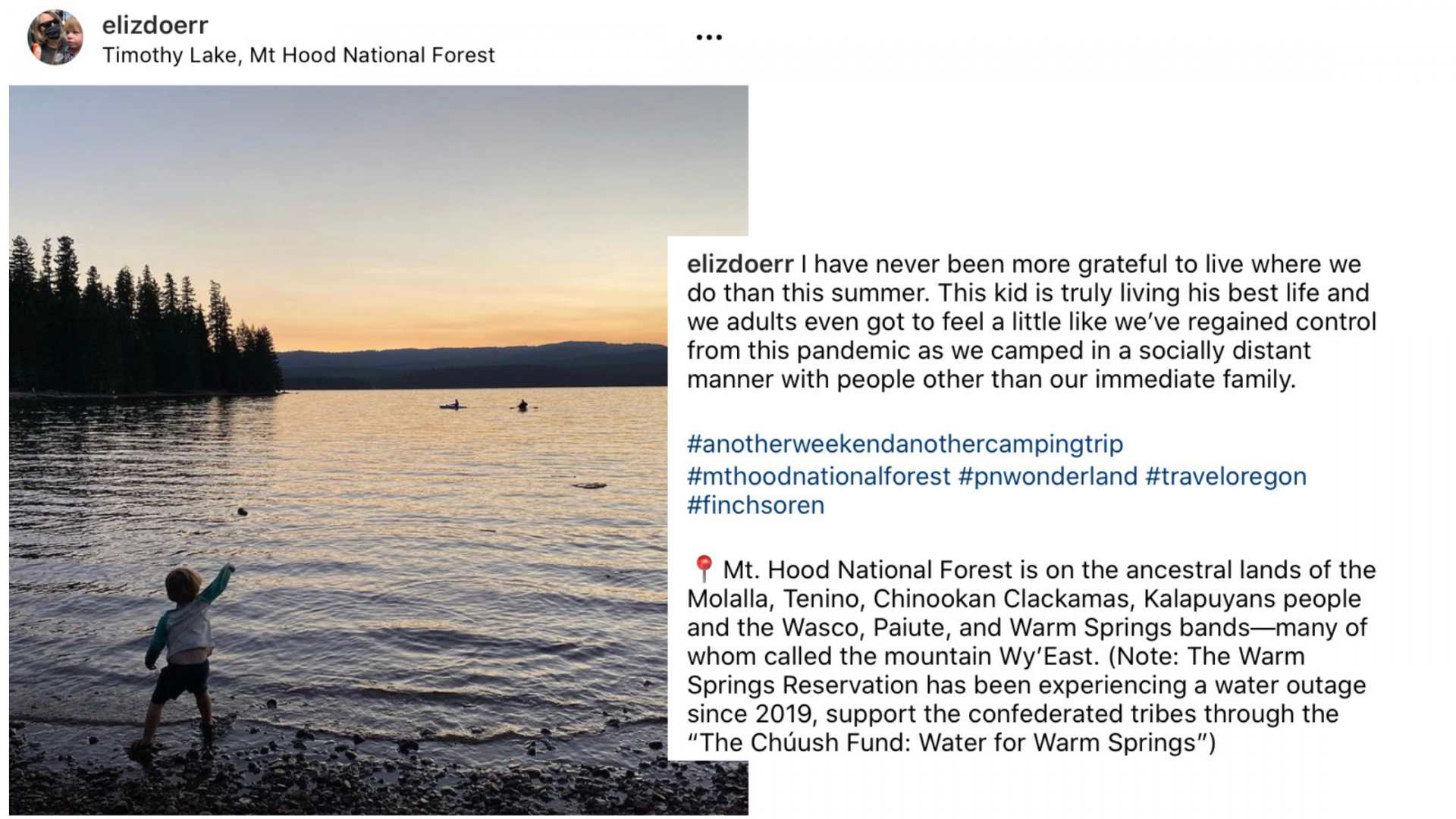 Those beautiful North American landscapes on your Instagram feed also happen to be the ancestral land of Indigenous peoples. By acknowledging this fact in your caption, you create a habit for yourself to learn about Indigenous people wherever you go and you plant a seed for your followers to do the same. Download the Native Land app* on your phone which uses GPS or text 907-312-5085 with the City and State to identify whose land you’re on.

*Note that while the Native Land app can give some insight into whose land you’re visiting/on, it’s not a complete picture of official ancestral territories, but it can be a starting point to learning more.

How to Effectively Acknowledge Indigenous Lands 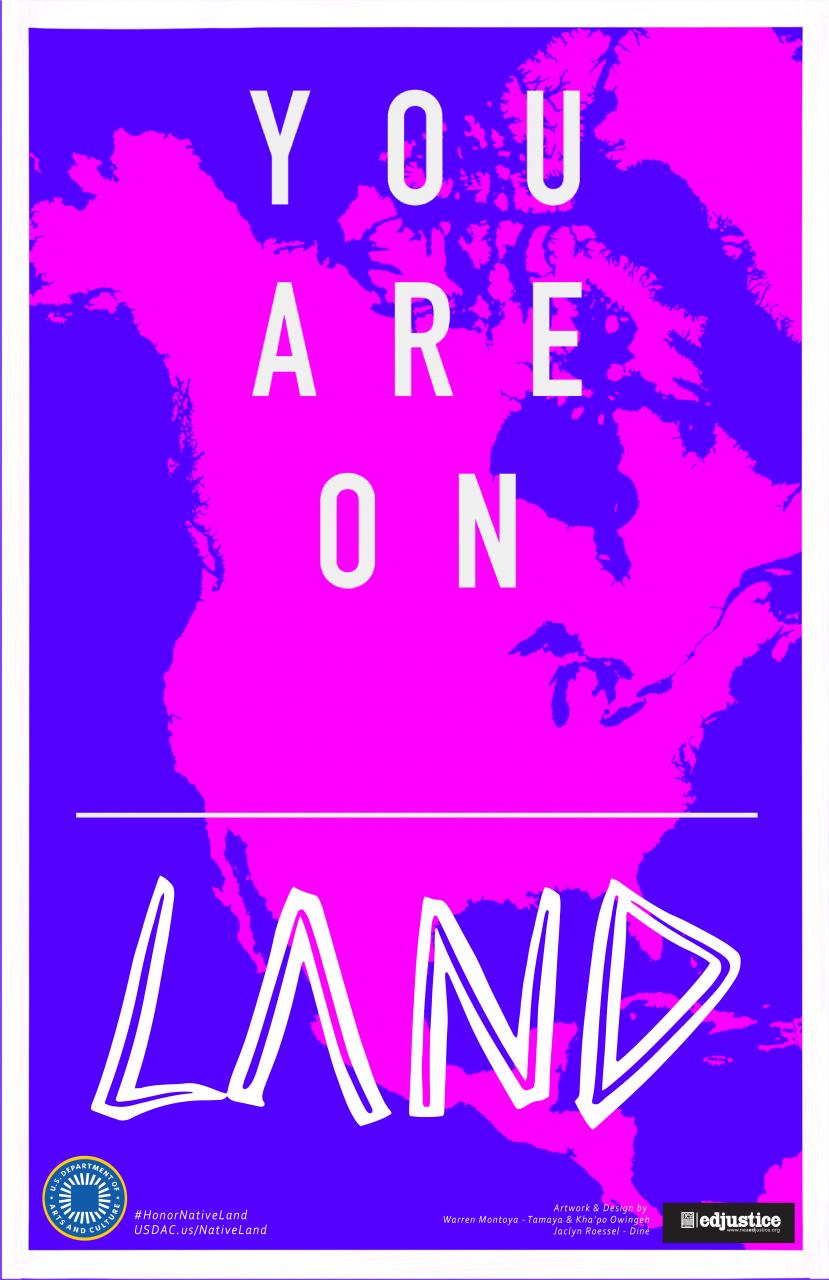 Here are some tips to ensure your land acknowledgement is genuine and action-oriented. While some of these tips won’t apply to some contexts (e.g., social media posts won’t be as involved), they are useful to keep in mind generally.

Sources that helped build this list include the American Indians in Children’s Literature blog, the USDAC Honor Native Land guide, and the Native Governance Center.

Reframing our perspective of history and land acknowledgement are important personal areas of growth. But for these personal shifts to mean anything, they must translate into some sort of action. Here are a few first steps towards taking action. They all involve listening to Native voices and following their lead.

One way settler colonizers like myself can do is to pay rent to the Indigenous peoples whose land we live on. The Duwamish Tribe has formalized this beautifully through Real Rent Duwamish where Chairwoman of the Duwamish Tribe, Cecile Hanson, quotes, “We sacrificed our land to make the City of Seattle a beautiful reality. We are still waiting for our justice.”

If you don’t live on Duwamish land, seek out the Indigenous organizations and tribes in your area and “pay your rent” by setting up a recurring monthly donation.

Additionally, for textiles and patterns that are rooted in traditional practices by the tribes or nations of the artists, learn about the significance beyond cherishing the art for its beauty. If you want to bring souvenirs home, seek out the traditional artisan crafts over cheap, throwaway items and be careful not to buy products that are appropriating traditional textiles, patterns, and other crafts. The practice of falsely selling Native-made products is not only unethical, in the United States, it’s also illegal under the Indian Arts and Crafts Act of 1990. 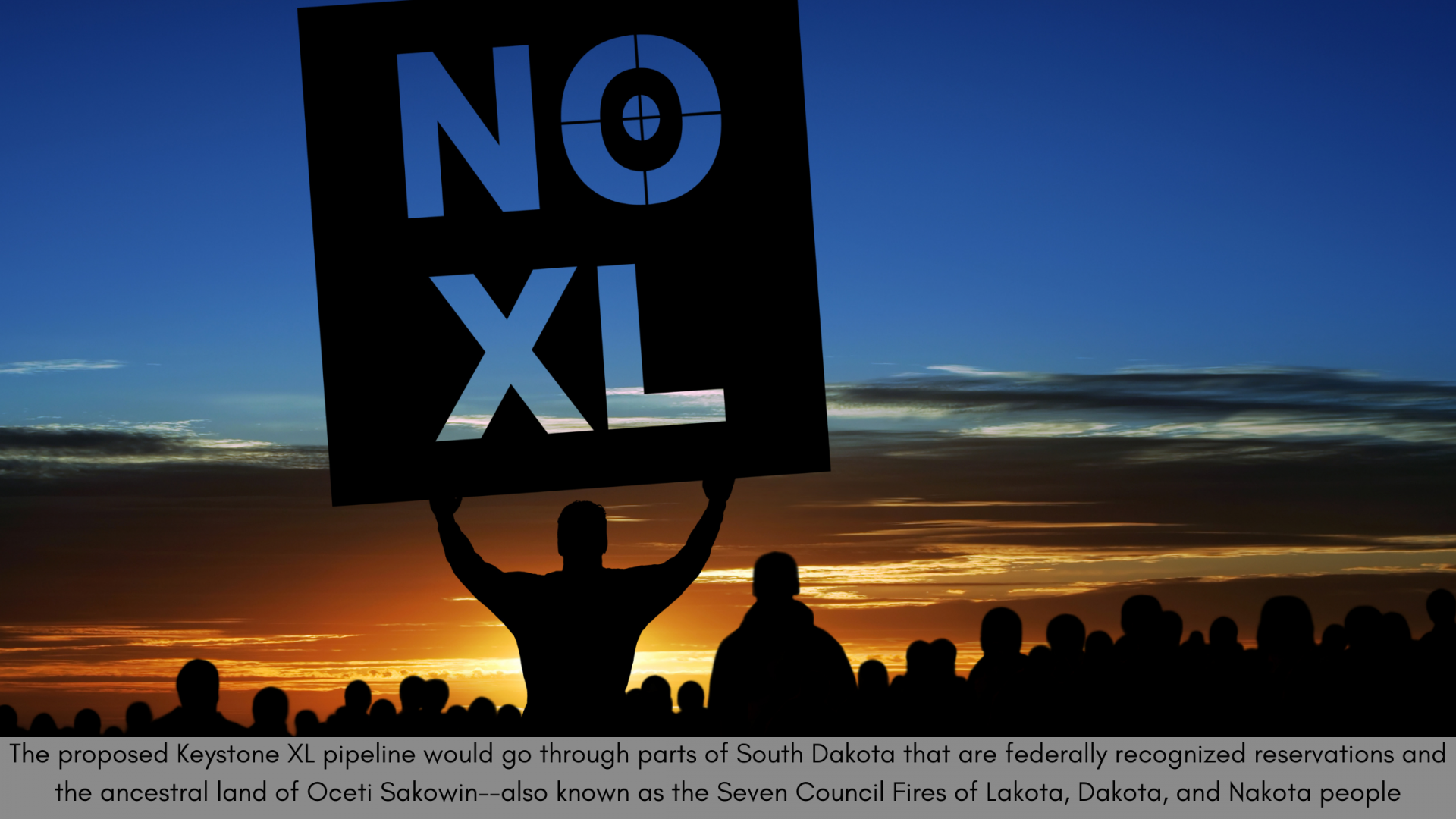 There are many vibrant Indigenous movements across the region and world that are rooted in returning the land back to the original stewards. Learn about and support those efforts to go beyond mere symbolic acknowledgements.

My hope is that if we all start to think more holistically about the history of the land we’re on, we can bring discussions of Indigenous history, resistance, and culture into the everyday. These are but small things those of us settler-colonizers or travelers visiting Indigenous lands can do.

Conscious Travel During And After A Global Pandemic