Living Abroad: Angela Bruneau Shares Her Experience About Living in Amsterdam, The Netherlands

We all dream of living abroad at least once in our life, but what does the ex-pat life actually look like? Bébé Voyage’s very own Social Media Manager, Angela Bruneau shares her family’s experience living in Amsterdam, the Netherlands.

Q. When and why did you move to Amsterdam?

A. Our first stay in Amsterdam was in April 2018 and our second was April 2019.  Both times we selected Amsterdam as our base for my husband’s job with the airline. He is a commercial pilot and there is a reciprocal agreement between the European and Canadian airlines where pilots can work for either company during the busy seasons.  It’s a great perk we look forward to! 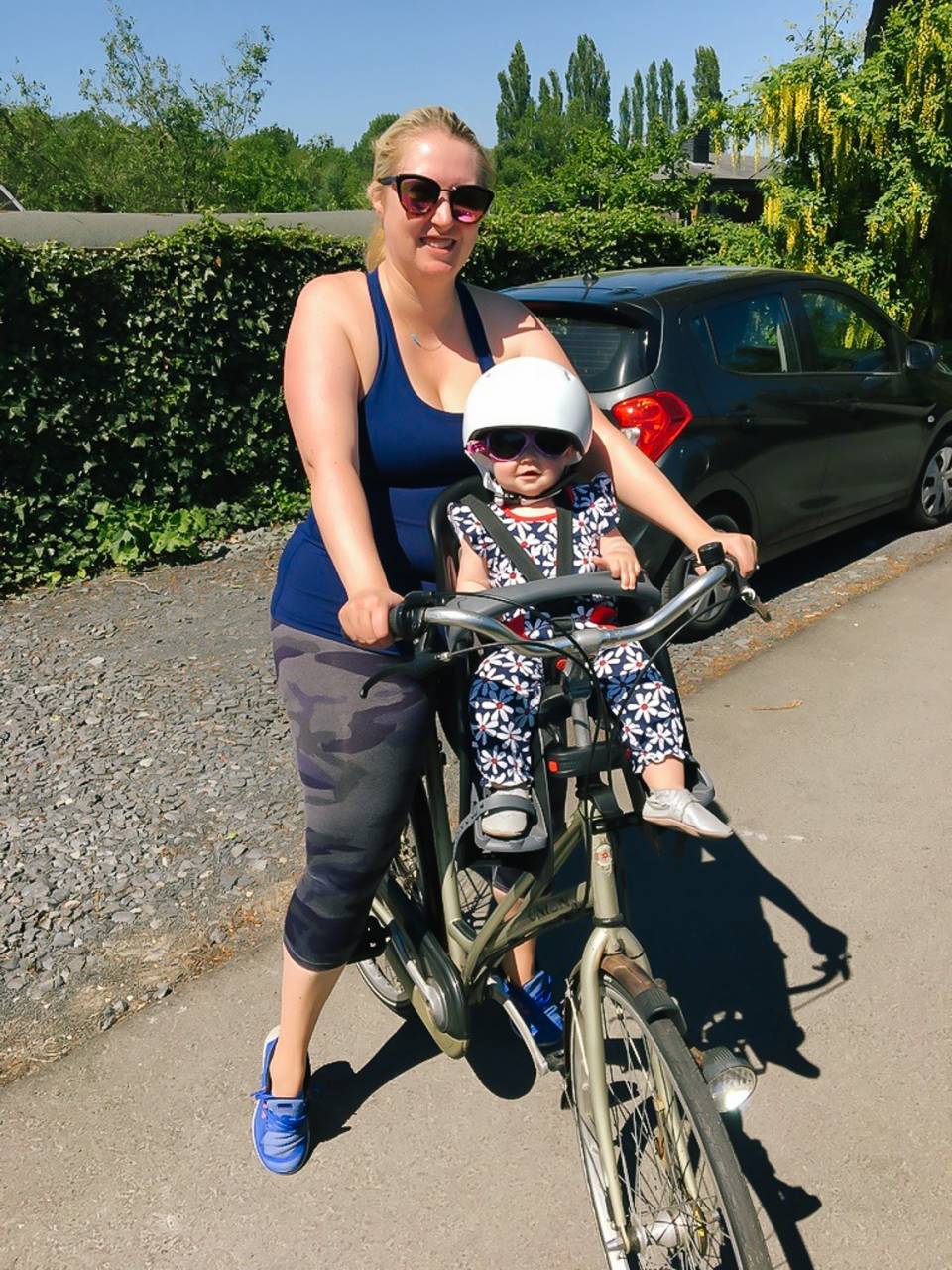 Q. What was your favorite thing about living in the Netherlands?

A. Can I say the cheese?  Really we just love the laid-back lifestyle and being outdoors.  The children’s playgrounds are the best I have seen, they are mostly made out of wood and built in a way that encourages kids to really use problem-solving while playing on them. Cycling was also a firm favorite!  Everyone young and old is on a bike and the road system allows you to do it in a really safe manner.  We bought ‘Dutch’ bikes (used bikes) with the intent of selling them to the crew replacing us, but we ended up bringing them back to Canada with us. We loved them so much.

Q. How did you find the lifestyle in Amsterdam? Did you manage to adapt to daily life easily?

A. Everyone is laid back and efficient, so it was amazing.  I was worried about not knowing any Dutch, but everyone spoke English, which made it easy for us to integrate.  The hardest part, I think, was following the philosophy of letting kids explore on their own. Something we were not used to. The owner of the little cafe, a few of us moms frequented, used to laugh as we took turns checking on the kids on the playground while we sat and had our coffees and breakfast.  He pointed out Dutch children have a lot of autonomy and in North America, we really liked to hover.

Another thing that was hard to get used to at first, is that not a lot of places accept a foreign credit card.  At home, in Canada, we use our credit cards to pay for almost everything to rack up the travel points and treat it as cash.  In the Netherlands, they still use cash more.  So when paying for groceries, for example, I always had to make sure I had cash on hand.  There was a big festival weekend where we live, and the cash machines would usually run out of cash, so it was an interesting time trying to find a cash machine in a nearby area that would accept our foreign cards. 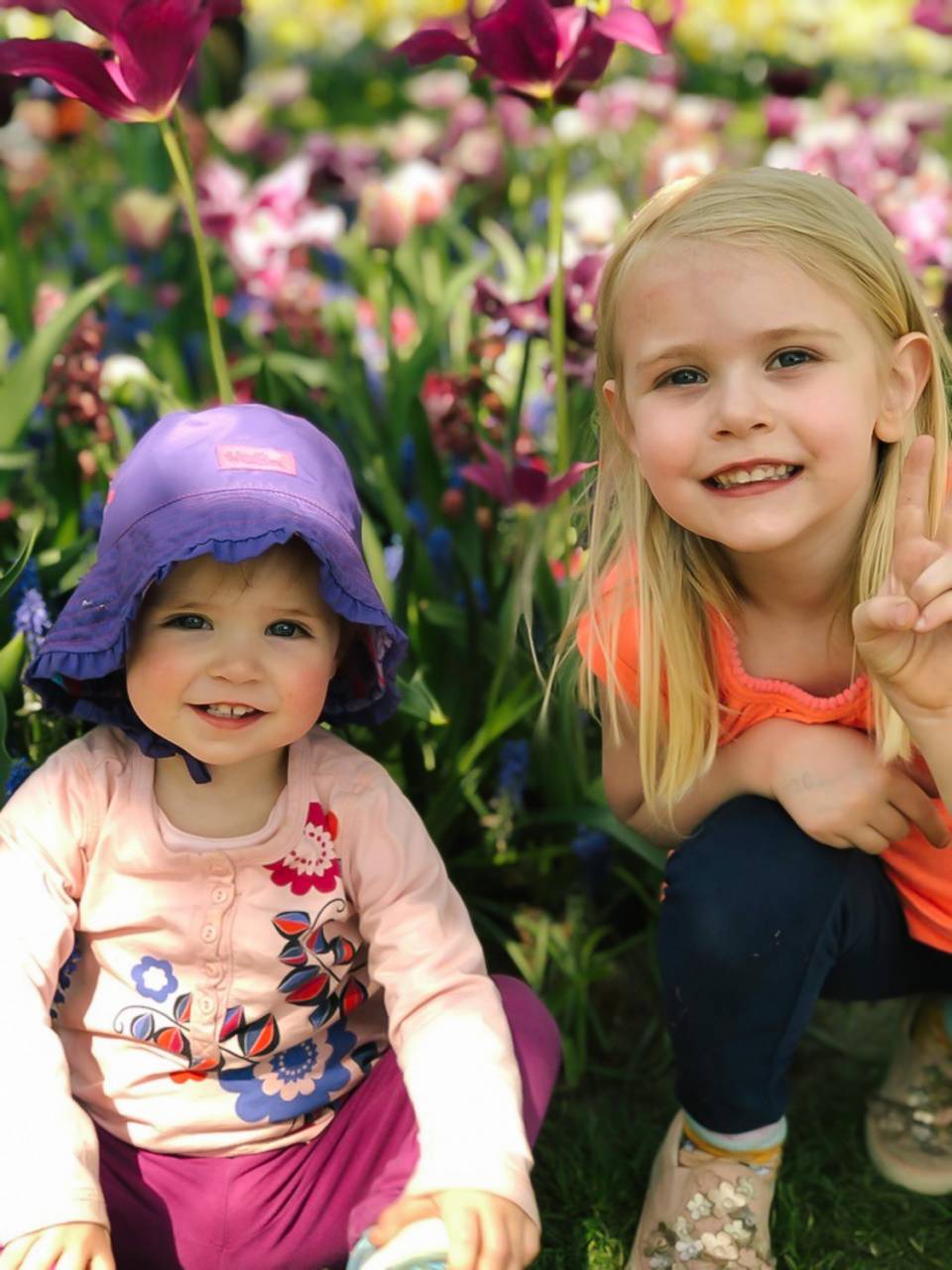 Q. How was family life? How did the kids find living in a new place and culture?

A. We were lucky to be living in Amsterdam with other families from my husband’s airline and all lived in the same little neighborhood. It made it easier to socialize as we were all very familiar with the ‘aviation lifestyle’. ‘Pilot Wives’ are very resourceful and we tend to stick together. One of the moms found a local gymnastics camp for the kids where the instructor spoke in Dutch, French, and a little English. It was perfect for our bilingual children used to hearing two languages at the same time whilst they played!

Amsterdam has so much to offer for kids!! Lots of different parks, trails, and even museums that cater just to kids.  Some of our favorites were the Miffy Museum in Utrecht, any of the cheese markets that are in lots of the villages near Amsterdam.  The Kinderboeken museum in The Hague, with lots of interactive exhibits for imaginative play for all ages.

Amsterdam and the surrounding area has a large ex-pat community so there are lots of Facebook ‘mom’ groups for connecting to do playdates or meetups in the local parks.

Our oldest daughter has really missed not living in Amsterdam this year and talks about it constantly.  Kids adapt really easily anyways, but I think they prefer that freedom they have and being able to explore so many places by car. 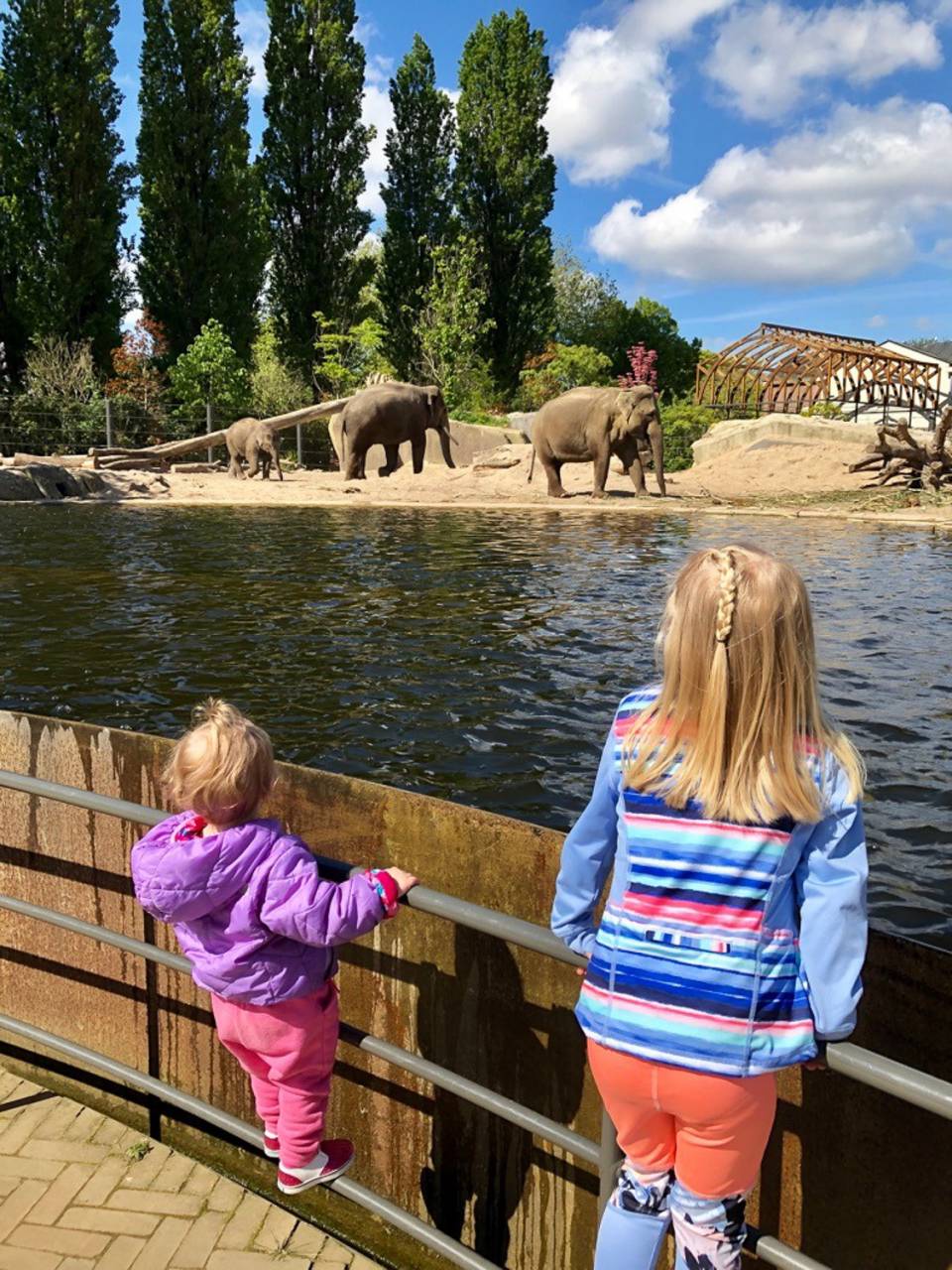 Q. What did you miss most about Canada?

A. My full-sized fridge.  Everything is smaller in the Netherlands, including the fridge we had.  I found we were grocery shopping a few times a week instead of the once a week big shop.  Also, the ovens were combo style so they were microwaves, convection, and oven all-in-one.  Of course, the instructions were in Dutch so it was a lot of trial and error when it came to cooking.

It’s become a running joke that we always bring Canadian staples from home each time; going back all the way to when my husband worked in Africa.  We bring a case of Kraft Dinner for creature comfort and some Canadian Maple syrup.  We usually don’t eat it all, but on those days where you need it, it’s there.

Q. What were the biggest challenges you faced when living in Amsterdam?

A. I don’t know that we had any real challenges. A word of caution, the Dutch have zero tolerance for speeding. You will get a ticket by being 3% over the limit, and there are speed cameras everywhere. In Canada, you are good 5 – 10km over the speed limit and we don’t really have photo radar in most cities. My husband learned the hard way.

Q. If you could move to Amsterdam again what would you do differently?

A. We are dying to go back.  I just have so many more places to explore in the country, and I had been doing some research on the liberation from WWII. My grandfather was actually living in a town close by on liberation day, so I would like to spend more time exploring where he was and visiting some sites related to that.

I also promised myself to learn more Dutch when we go back.  Because we live in a small town I feel like they think we should know some more Dutch by now.  The shop owners know when we are back for the season and it is like we have lived there for years, waving and saying hello as we bike around town.  So, as a sign of respect I plan on trying to have some conversational Dutch ready. 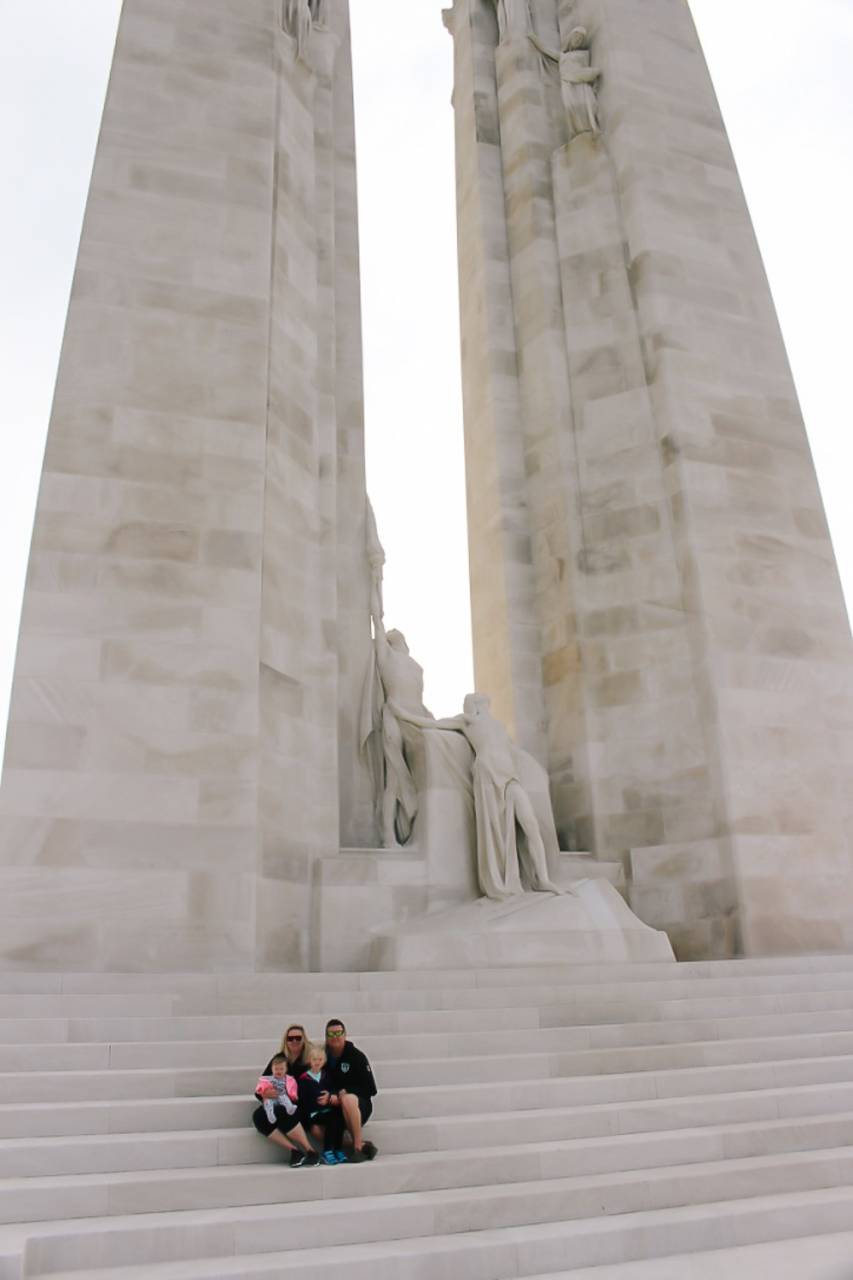 Q. Can you give some useful tips to families who are looking to move to the Netherlands?

A. Transit is amazing and you can also get around a lot by bike.  There are lots of shops that sell second-hand bikes, so you can get a good value bike right away and figure out what kind you like before investing in your forever fiet.  Cash is king!  Always have some on hand.  When using the trains, make sure you swipe in and out correctly or it will cost you!

Q. Why did you decide to move back to Canada?

A. Due to Visa requirements, we can only stay so long in the Schengen zone, so we rotate in and out based on those restrictions.  We have had opportunities to be based in many other countries, but living in Amsterdam just always feels like home.

Q. What do you miss about your expat life?

A. Having the ability to drive to France or other nearby countries.  We did a bunch of road trips into France and did a few bucket list sites, such as visiting the Vimy Ridge memorial and exploring the Champagne region.  For my oldest she has an infatuation with Paris, so taking the train for a quick weekend in the City of Lights is always her favorite.

A friend in Canada was also back visiting family in Antwerp for a few days, so we just hopped in the car and spent the day with her wandering around the city.  Things like that are why I really miss living in Amsterdam.

A. Whether you are visiting the Netherlands or looking to move, be sure to spend time in the smaller communities.  That is where the real heartbeat of the country is.

You may also like these other expat stories from our Bébé Voyage blog:

Marley (They/Them/Their) is the Editor-in-Chief for Bébé Voyage. Marley is an avid traveler, food lover and parent to one kiddo. They hold a BA in English Literature and a Diploma in Freelance and Feature Writing with the London School of Journalism. You can find out more about Marley at www.mconte.com
All Posts »
Become a member
PrevPreviousRacism In The Outdoors
NextA Very Canadian ThanksgivingNext