We all dream of living abroad at least once in our life, but what does expat life actually mean? Bébé Voyage’s very own Director of Content, Kelly Wright, shares her family’s experience about living in Doha, Qatar.

A. My husband and I met in college at Florida State University (Go Noles!). We now have two little boys who are crazy and drive me up the wall most days, but are quite literally our everything. For the past two years we have been living in the suburbs of Boise, Idaho. Before this though, we lived in Doha, Qatar for seven and a half years…which actually feels like a lifetime ago now.

Q. When and why did you move to Qatar?

A. We moved to Doha, Qatar in September 2010. The last six months of that year had been a complete whirlwind for us.

I remember we had just gotten back from a trip to Israel, which had been our first experience to the Middle East and I LOVED it. The sights, the sounds, the smells…it was everything I had dreamed the Middle East would be. A few weeks later, we heard that an airline in Doha was hiring pilots. On a whim, my husband decided to apply. Neither of us thought he would be called for the interview. It  just seemed like such a pipe dream at the time that we figured it would never actually happen.

A few weeks later, he had that interview! Within two months of applying, he had been offered the position and we had started to sell all of our belongings in order to make the big move to Qatar. In September, we boarded the plane and just looked at each other. Part of me thought we had gone absolutely insane. The other part of me though could not contain my excitement.

Q. What was your favorite thing about living in Doha?

A. The people. My husband and I both grew up in South Florida, so I like to think that we had a pretty diverse upbringing. It was nothing compared to Qatar though. Within days, we had met people from India, Australia, Canada, Iran, Germany, South Africa, Sri Lanka, Argentina, Saudi Arabia, Scotland…you name the country and there were expats from there! Many of those people we met in those first few weeks became some of our best friends. I truly consider many of them family now. With all of the different people and cultures came different languages, religions, food, and viewpoints. It was truly eye-opening and completely changed how I look at the world today.

Q. How did you find the lifestyle in Qatar? Did you manage to adapt to daily life easily?

A. Yes and no. When we first moved to Qatar, we were living in a compound that was mainly families from my husband’s company. It was a little like college all over again. Lots of parties, nights out, and meet-ups by the pool. There was a coffee shop on the compound and a lot of the spouses who weren’t working would meet there in the afternoons and have coffee and a pastry and just hang out. It was definitely a leisurely lifestyle and that was extremely easy to get used to!

Other things were very hard to adapt to though. Rules and laws were changing on a daily basis. You needed approval for EVERYTHING. My husband needed approval from his company to get things like a liquor license and I needed approval from my husband to get mine. Getting any sort of paperwork approved was an absolute nightmare. You would have to run from one side of the city to the next to get signatures, only to be told that the rules had changed once you got everything you needed and you had to do something additional. Roads were the same way. One day a road would be fine and leading to where you needed to go, the next day it was closed with no signage as to how else to get there.

If we got even one thing accomplished in a day, we considered it productive. Other times, we would just come home and shake our heads knowing we had a “Doha Day”…which was basically a day wasted.

Q. How was family life? How did the kids find living in a new place and culture?

A. When we moved to Qatar, we did not have any kids. So, in the beginning, family life was very easy. I actually ended up getting a job working at a veterinary center. It was the perfect job for me as I love animals. The job let me play with animals all day while also allowing me to take off whenever I wanted to travel with my husband on trips.

I got pregnant about two years after moving to Qatar and then again three years after that. It was easy for my kids as Qatar was everything they ever knew. They considered Qatar home. When we would visit the U.S. to see family, they would ask when we were going “home.” In a sense, it was actually harder for them culturally when we moved back to the U.S. To this day, my oldest son still doesn’t understand that states are not different countries. 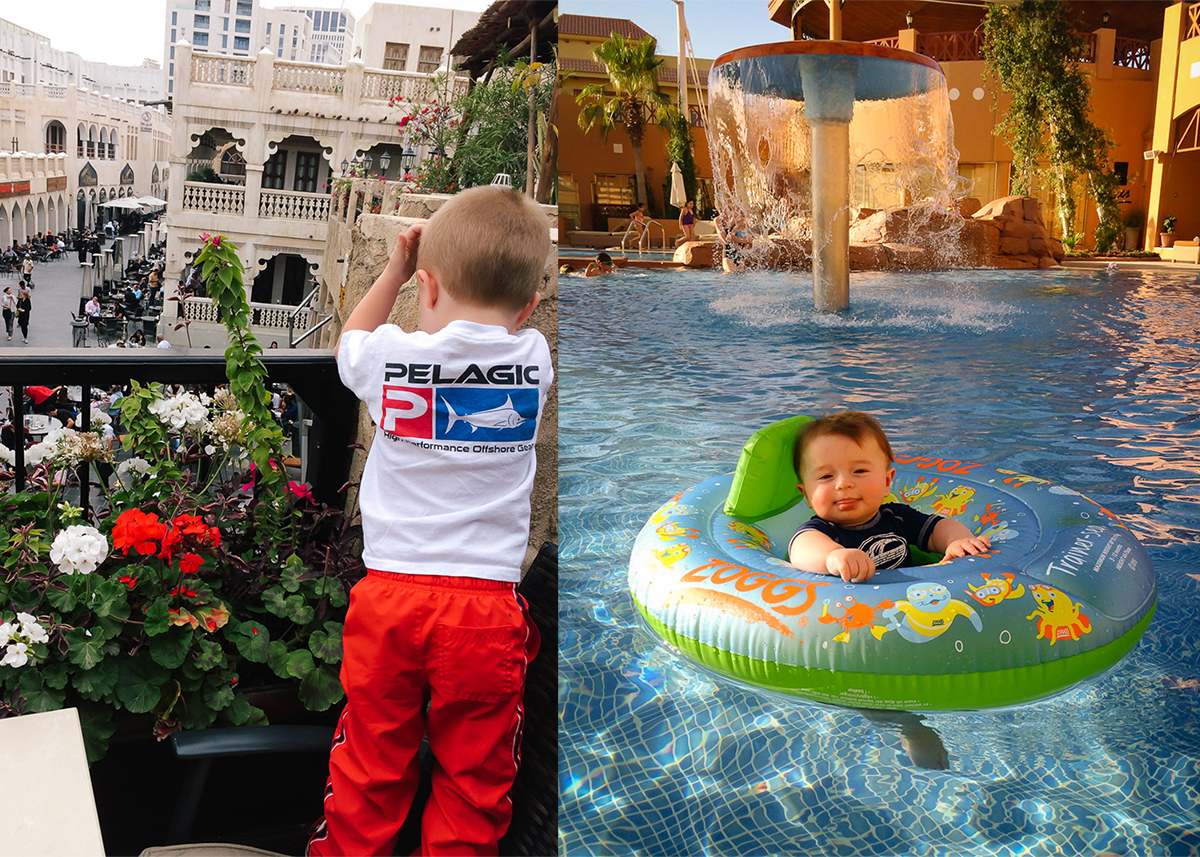 Q. What did you miss most about the U.S.?

A. At first, nothing. As my parents had coincidentally moved to Abu Dhabi a year after we moved to Doha, I saw them fairly often. One of my brothers had moved to Johannesburg to do an internship and I also saw him a few times in the first couple of years. Since my youngest brother was in college at the time, I saw him as much as I would have had I been living in the U.S. I traveled with my husband on at least one trip a month and we took multiple exotic vacations each year. I could hop on a plane and be home in 16 short (ha!) hours to visit family and friends–which I did on a couple of occasions! As Qatar had a ton of American food chains, there were only a few missing food items that I craved as well.

Once we had kids though, I actually missed the U.S. a lot more. As many problems as we have here in the U.S., it is actually a great place to raise kids. Eventually, the excitement of living in Doha wore off and the eagerness to get home to more of a familiar life for our family became the most important thing. 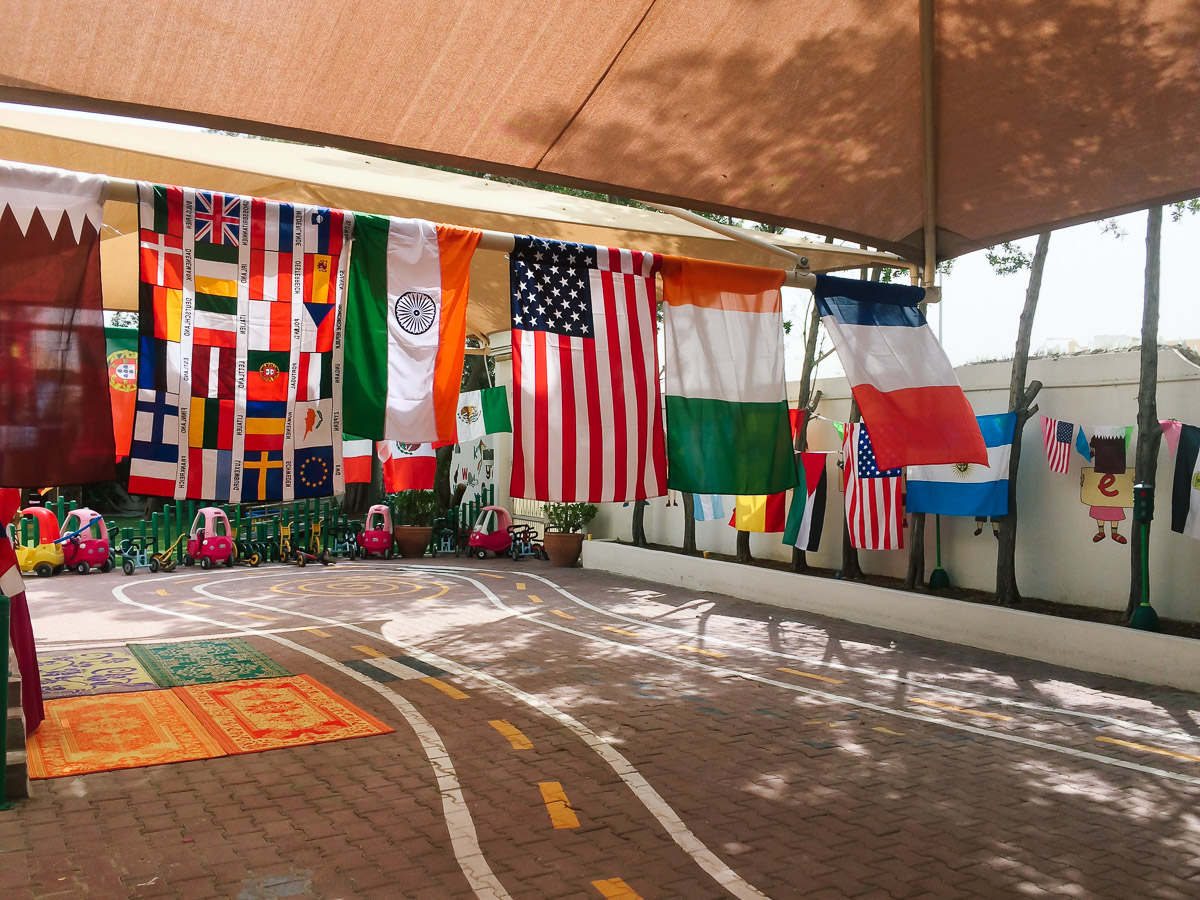 Q. What were the biggest challenges you faced when living there?

A. The biggest challenge was dealing with the heat. There were two seasons there. Hot and hotter. I’m not joking either. If there was even the slightest breeze it felt like a hairdryer directly in your face. Summer days could easily find themselves hitting 125F (50C) with a cool down in the evening to 90F (32C). Winters were gorgeous, but they were brief. You really have to be able to tolerate the heat in order to live there. 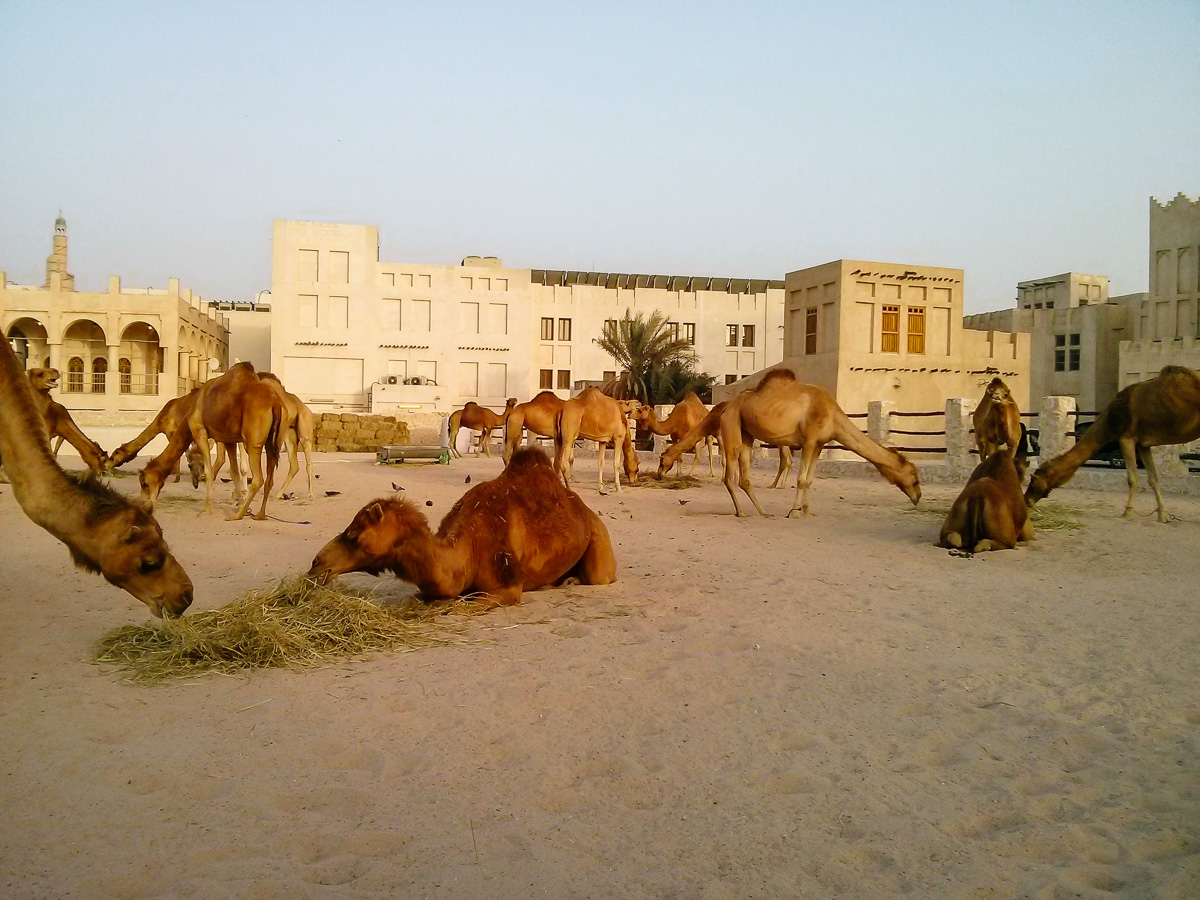 Another big challenge was the work schedule my husband had. In the end, his schedule is actually what finally pushed us home. He worked A LOT. He was rarely home and because he flew a lot of cargo for them, he could be gone up to 16 days at a time. I remember quite a few months he would have schedules where he would only be home for a day or so after a long trip and then off again. Plus, that day home was spent sleeping as his circadian rhythm was so screwed up from the time zone changes. I eventually just looked at him and told him that this was an unsustainable lifestyle, regardless of how much they paid us.

Driving there was stressful too. Actually, I’m not even sure you could call it driving. It was literally getting in your car and hurtling yourself down the road and praying you didn’t get hit.

Q. If you could move to Qatar again what would you do differently? 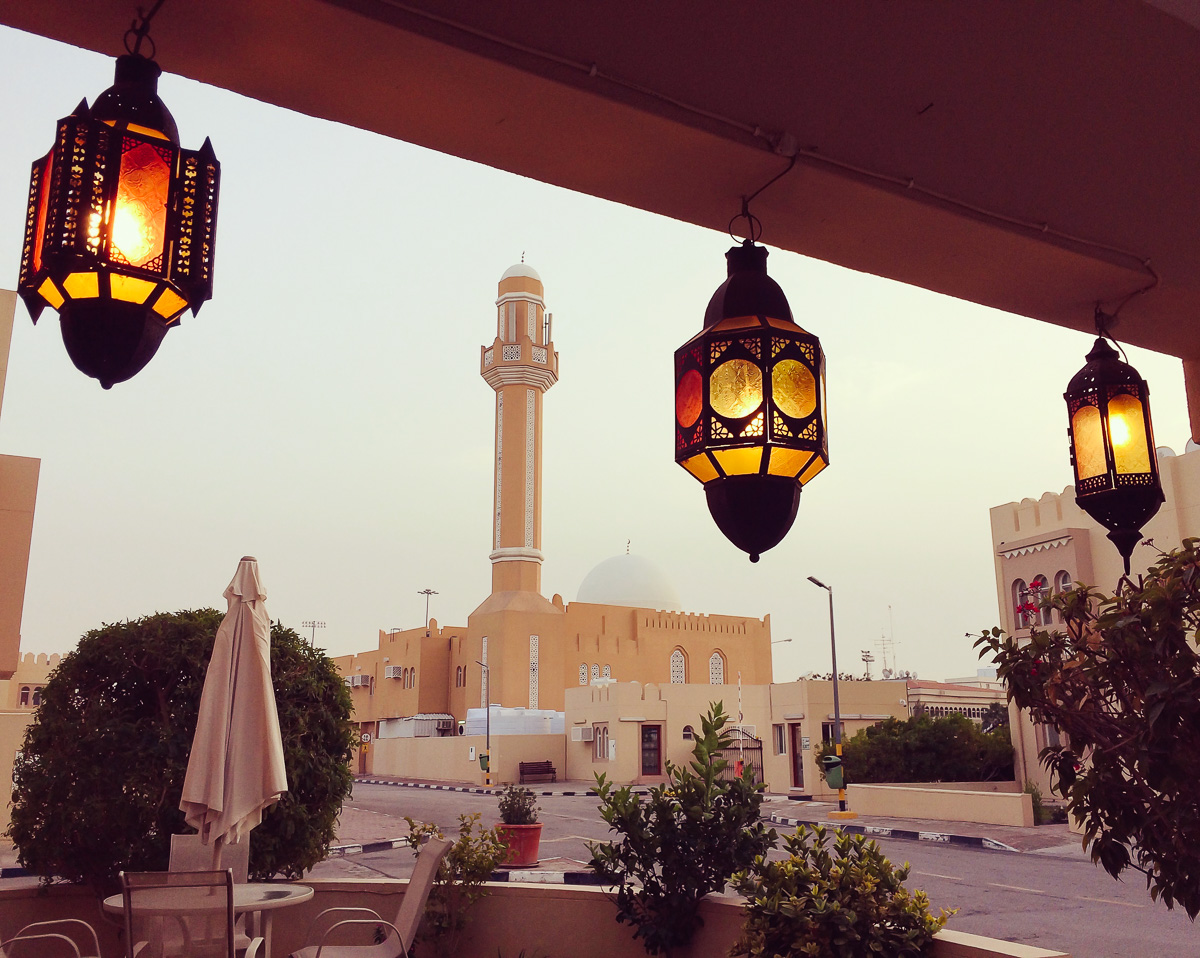 Q. Can you give some useful tips to families who are looking to move to Doha?

A. Doha has a good and a bad side. Just know that going into it and have an exit strategy when your family looks at you and says that it’s time to go. We originally went for two years and ended up staying seven and a half.  Keep an open mind also. Qatar is not your home country and they do things very differently than you are probably used to. Do your research about what your housing and/or housing allowance will look like. Also, make sure you are getting a high education allowance as schooling can be very expensive. A good work contract is the difference between having a lifestyle that is worth leaving your home country for and being miserable and feeling trapped.

Regardless of the bad sides though, we honestly did love living there for the majority of our time. My oldest has been to 17 different countries and still talks about the mac n’ cheese balls he ate in Bali. We also made some amazing memories and I would not trade that experience for anything. It made us the people who we are today. If anyone has the opportunity to live there, I would HIGHLY recommend it.

Q. Why did you decide to move back to the U.S.? 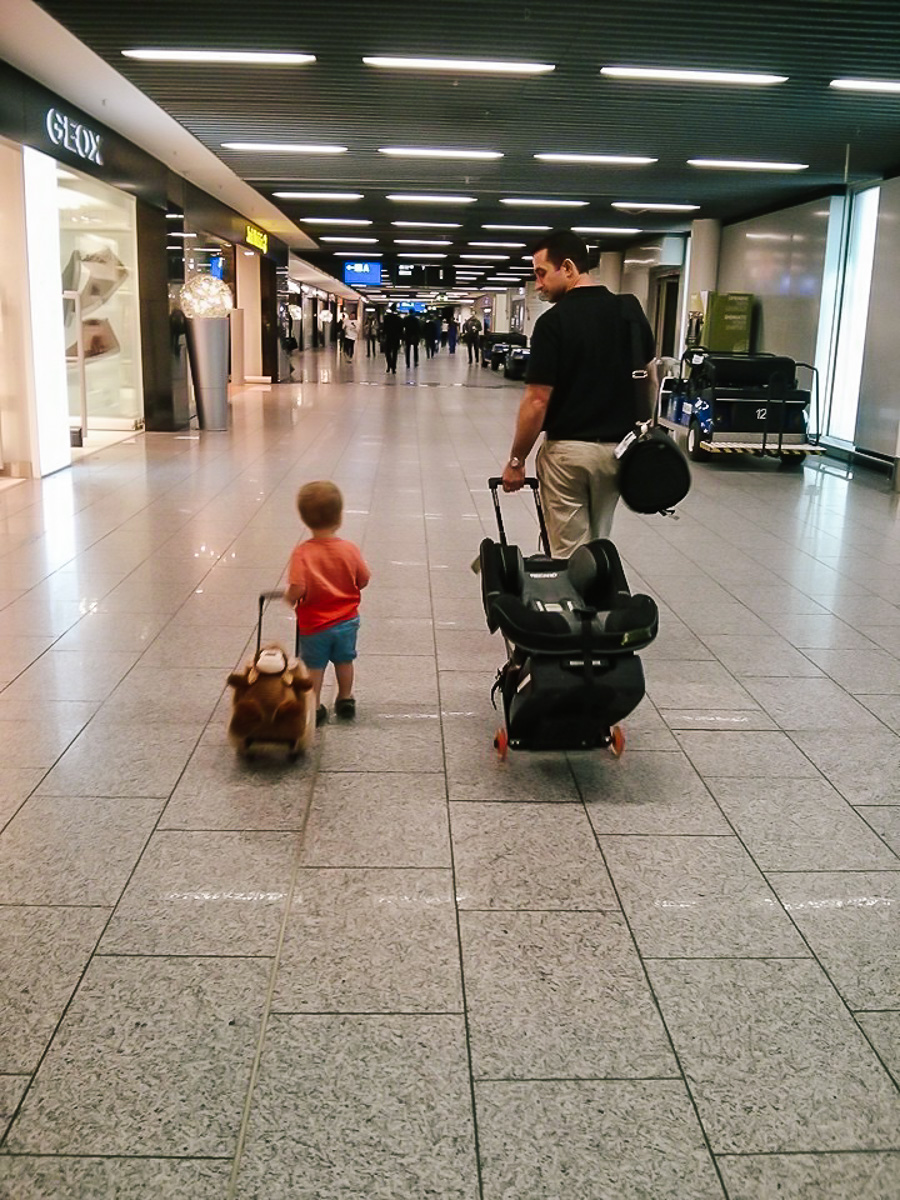 A. It was the best thing for our family. The kids never got to see their dad and even though they were still young at the time, it was important for us to have that family time. We knew by moving home we would be giving up a lot, but we would also be gaining a lot. And in the end, what we gained was worth so much more than what we would lose.

Q. What do you miss about your expat life?

A. I miss traveling. Every. Single. Day. It was so easy to just pack up and go somewhere there (pre-COVID of course!). We went to so many amazing places and had experiences that most people only dream of. It was easy to fly back from one vacation and sit there dreaming of the next. We were definitely spoiled in that sense.

A. For most expats, Qatar will be whatever you want it to be. If you want it to be a positive experience, it will be. Get out there, make new friends, step out of your comfort zone, and try different things. I had the opportunity to try everything from silk painting and Arabic calligraphy to watching camel races and attending mosque tours. It’s a cultural learning experience unlike any other.

The Hardships Of Traveling As A Pakistani And Muslim Woman

What To Pack When Flying During The Pandemic

Marley (They/Them/Their) is the Editor-in-Chief for Bébé Voyage. Marley is an avid traveler, food lover and parent to one kiddo. They hold a BA in English Literature and a Diploma in Freelance and Feature Writing with the London School of Journalism. You can find out more about Marley at www.mconte.com
All Posts »
Become a member
PrevPreviousDreaming Of Travel Again! Our Favorite Places We Hope To Return To – Part 2
NextHow Major European Airlines Are Responding To COVID-19Next