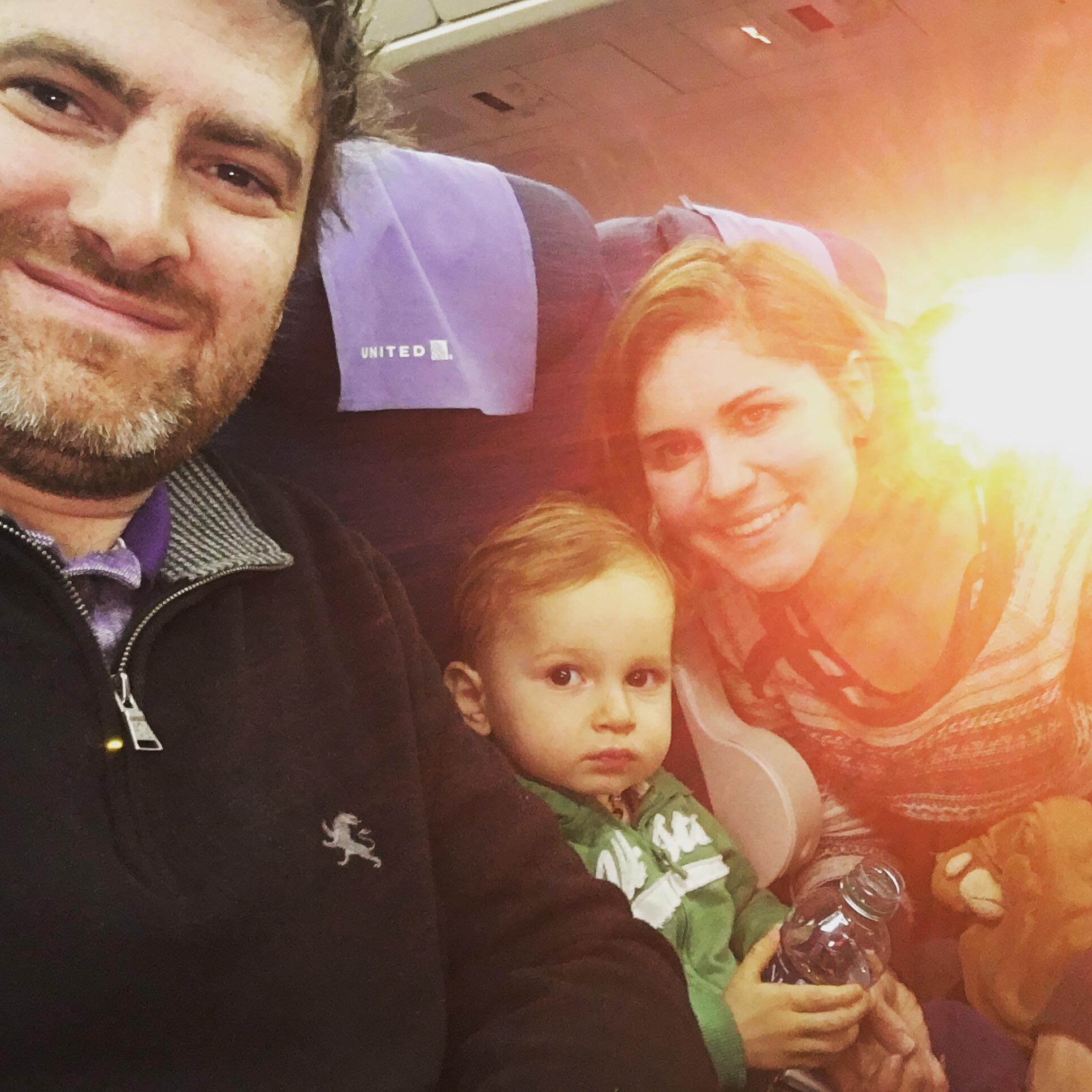 Ever heard anyone say, “I need a vacation from my vacation” and think with a sarcastic smirk on your face “poor you.”

Well, I need a vacation from my vacation. Just said it!

I bet almost everyone who says that, by the way, are either parents or young singles coming back from Ibiza or Cancun. While I know that it’s possible to have a relaxing holiday with baby in tow, it’s so easy to get it wrong.

Here I was feeling pretty confident about my travel with baby skills. I run a community of parents who travel with babies. I read every single conversation at least once, comment on almost all, and have written a few articles about traveling with babies and read tons. I’ve traveled from Chicago to California and New York, throughout France and Italy, alone with my baby boy. That’s 19 flights in less than two years, and that’s not counting all the train and road trips. I’ve got this.

It was the eve of our departure to the French Alps from Chicago and for the first time since when our baby was two months, my husband was traveling with us. We were traveling together. If I could handle it alone, this would be a walk in the park. There was no doubt in my mind, I’ve got this.

I like to talk about the x-factor when traveling with babies. The x-factor could mean anything from travel delays, to getting sick overseas, to being overtired, to having an extremely cranky toddler due to lack of sleep and forgetting his beloved blankie. If you haven’t guessed already, this all happened to us on our last trip.

While we were in France, we had the great joy of meeting a new member of the family. My brother and sister-in-law have just welcomed to the world a little baby boy. My sister-in-law, who was on week six of motherhood, was eager to find out how I got my son to sleep through the night. Amazing how quickly you forget this stage when you arrive at the second birthday. There’s just so much that happens in between! What I should have told her is that in the end, you try something and when it doesn’t work, you try something else, and if that works then that will become your system. The problem is every few months, that system stops working and you find a new one. It’s a constant learning process.

Traveling with baby truly tests your parenting skills. This past trip was one where all my systems (unbroken for a year and a half) broke down and I learned a lot about traveling with a two year old (the dreaded travel age).

1. If your baby has a blankie that is essential to his sleeping and/or soothing, get multiples.

My son has been addicted to his soft bunny rabbit doudou, the French word for blankie or lovey. He’s always been an excellent sleeper, and I’ve told babysitters time and time again, “just give him his doudou and his pacifier (titi, my son’s name for it), and he’ll go right to bed, no questions asked.” And this has worked without fail since he started sleeping through the night at 10 weeks (and happy to report works again now that we’re back). I’ve been absolutely blessed with an easy sleeper, but I’ve maintained that it’s because we established a routine with him since day one, and our baby loves his routine.

When I realized his doudou was becoming essential for everyone’s sanity, I began asking my sister-in-law, the person who bought the present, where she found it. When she told me the brand had discontinued it, I simply decided to be extra careful.

If this sounds like you, do whatever it takes, get multiples. Most people won’t have my misfortune of the brand discontinuing your baby’s lovey. Rather than giving your baby the original, give him the double before traveling so the smell gets on it (you know the smell of themselves, of comfort). If you’re in my situation, then the task is harder. Find new ones that have common features, and get them used to it quickly.

For instance, I’m currently looking at purchasing this Angel Dear long-eared beige bunny as a Doudou back-up. Another French website I’d recommend, if you happen to be in France, is called Doudous Perdus. 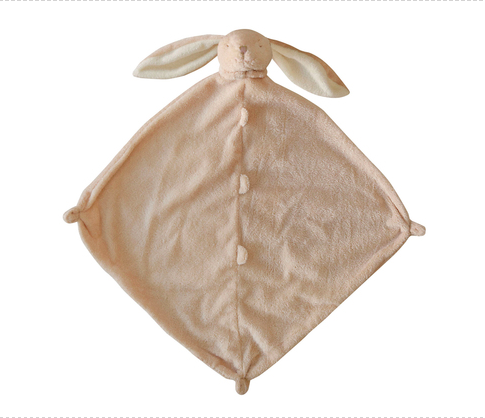 The fortunate parents are those who have a child who has multiple blankies.

As we left the apartment to grab our taxi to the airport, our bébé dropped his doudou in his room. We only noticed fifteen minutes later in the taxi and took a quick decision to not turn around and run the risk of missing our flight.

You can imagine how upset we were when we realized this. We hadn’t even left Chicago yet, and we already knew we were in for a rough trip. Luckily, we had bought an Angel Dear monkey blankie for the new little cousin. At the airport, we flung open the suitcases, rummaging through all our clothes to find the gift. Unsure of which one it was, we tore open a couple before finding the right one. We then offered it to our two year old explaining he was the Curious George doudou, and miraculously he acquiesced.

It was only one flight and two trains later, in the car on our final leg up the Alps, that my son, exhausted from the trip, caught a peak of the picture of Doudou our neighbor sent to us, confirming she’d found it, where the true breakdown happened. Having to explain that Doudou was on his own vacation met deaf ears. He was screaming in despair.

Eventually, bébé came to love the little monkey and call him Doudou (I think the combination of him looking like Curious George and having a similar soft texture to Doudou were key), but it was touchy for about five days and he never once slept through the night the entire trip. Our very easy sleeper was now a baby who was waking up in the night and barely napping.

Do not let this happen to you!

The good news: Our little boy has been reunited with Doudou, but now also loves Curious George Doudou and is open to new blankies. His number one love will always the original doudou, but he is less addicted than he once was. A tough lesson for everyone, but a growing experience in the end.

2. Two travel essentials: Thermometer and Tylenol (Paracetamol) – do not leave without them!

Traveling in winter means chances of getting sick are higher.

In addition to having to get used to life sans Doudou, our bébé also fell ill with an ear infection. The flight coupled with the altitude of where we were in the Alps was no picnic for his little ears.

On night five, our toddler was refusing to go to bed. It was probably partly due to missing Doudou and the bed he knows, but he was really screaming. Luckily my cousin, who happens to be a doctor, was there and told us he probably had an ear infection and wrote up a prescription for antibiotics.

Unfortunately, it was 8PM in a remote ski village in France, all pharmacies were closed. I wanted to at least give him some Tylenol, but lo and behold, I could not find it nor the thermometer anywhere.

By chance, earlier that day I had met a friend of my brother’s who has a son the same age as ours, who very sweetly gave us a bottle.

Never forget a thermometer and Tylenol/Paracetamol, no matter how healthy your baby is. If anything, it’s a security blanket. (No pun intended.)

Tylenol is Paracetamol/Calpol in the UK and Doliprane in France, by the way.

3. If possible, travel off season

January 11, on the other hand, was a completely different story. The airport was not at all busy and our flight had plenty of room.

The key to a comfortable flight with bébé is an unfull flight. So if you can, fly off season. Take advantage of it before you’re bound to school vacations.

Along the same lines, there are certain days that people travel more often on than others in certain countries. For instance in France, many rentals are from Saturday to Saturday, so please be kind to yourself, and do not do what we did and travel on a Saturday during peak travel time.

We traveled from the Alps back up to Paris on Saturday, January 2nd. Big no-no. The one and only road to Grenoble (where we were catching our train) was packed making us miss our train by a split second. The result was that we ended up getting two trains (as opposed to direct) and got to Paris four hours later.

If you have no other choice but to travel on busy travel days, than just be extra aware of it and give yourself a lot of extra time. And if you’re not sure what days are the busy ones at your destination, ask Club Bébé Voyage.

4. Don’t overdo it, especially if your baby is nearing the terrible age of two

This is tough for people like me, but it must be taken seriously.

We, like many families in the world,  do not have family in the city we live. This means our vacations are hugely dedicated to visiting family. And our families are big.

When living far from the people you love, it’s hard to say no to them, especially if you only get to see them once a year. But with a two-year old, you might want to think twice about what you say yes to. Or, if you can, make people come to you.

Our two weeks comprised of one in a remote Alpine ski village and the second in Paris, with one night in Normandy, another night just outside of Paris, and a lot of outings to visit family members. If this sounds like your upcoming vacation, good luck!

The truth here is that it’s easy to tell you to say ‘no,’ but if you’re in my situation, you’ll think, “How do you expect me to say no to my aging grandmother who’s only wish is to see her great-grandson?” This isn’t easy. But surely if you really look at your agenda, there is something you can cut out.

While it’s amazing to be with and introduce your little one to family and friends, just be conscious that there is only so much you can do in a certain timeframe, especially as your little one becomes a bit older and more conscious of all the change going on, but not old enough to understand why.

By this point, you may be wondering if I’ve decided to give up on traveling with my little one.

Parenting is a constant learning game, travel just heightens the experience. Travel is in blood and key to the way we are raising our child. I just need to apply some changes so that the next trip is more enjoyable for everyone.

And in case you’re wondering, our little one is back to his normal self. So all the anxiety that had overcome us during the trip has gone away.

If you’re reading this while traveling and are experiencing a rough trip, just know that once you get back home and into the routine (may take a few days), everyone should be back to normal. I can’t tell you how happy our little one was when coming home and being reunited with Doudou and all of his toys.

Plus, he now has a whole new vocabulary set (in French) and a much better knowledge of his French family. That’s a win!