A few months ago, we got a JetKids Bedbox Classic and we absolutely love it! Its smart design and functionality make it a great kids’ suitcase and flybed, all rolled into one. Previously, we had a Trunki and a First Class Kids inflatable pillow and the Jetkids Bedbox not only combines both, but it also beats both out of the park. Here’s why: 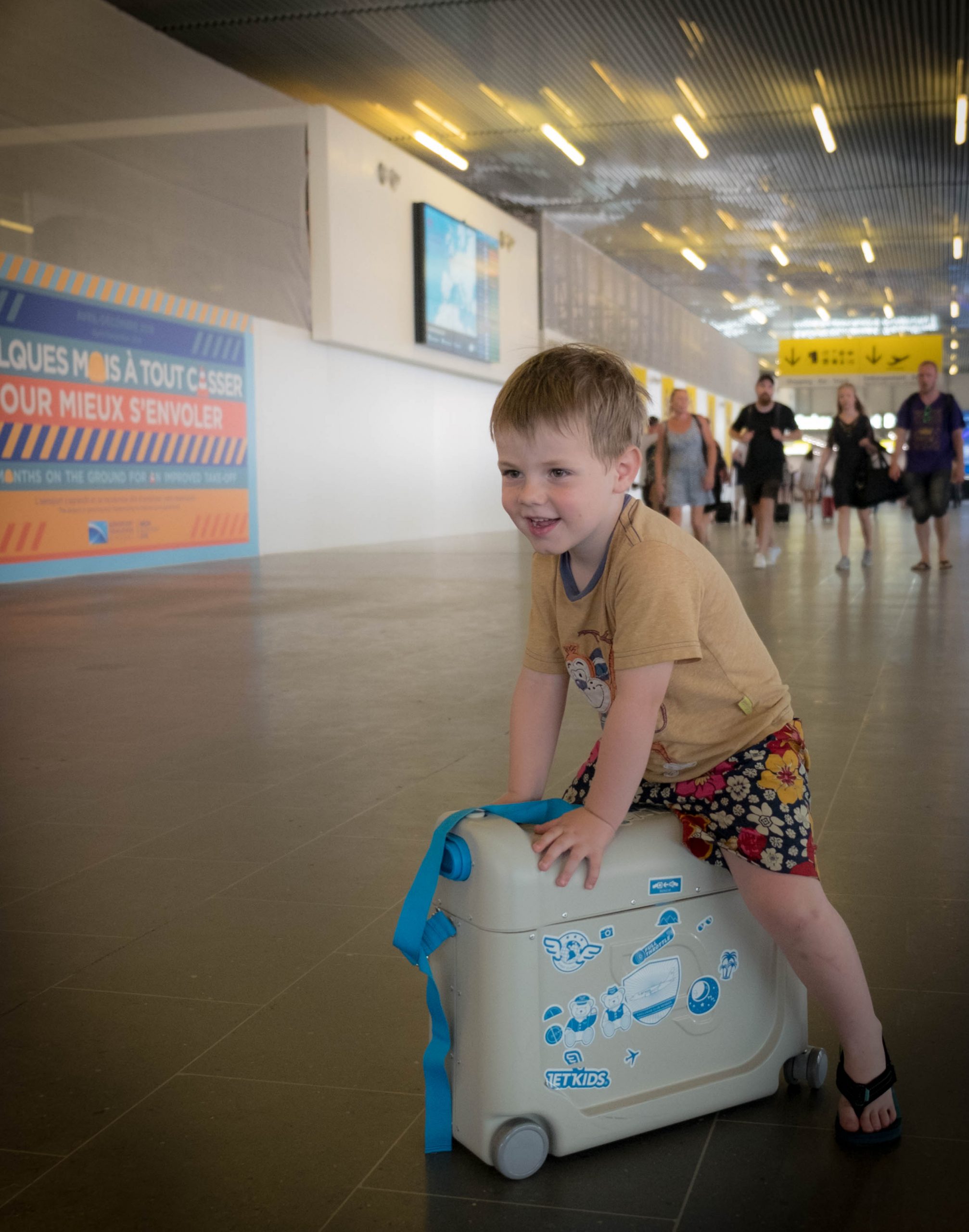 As a ride-on suitcase, the JetKids one we found to be more stable and more maneuverable than the Trunki. It has two fixed wheels and two swivel wheels which make it easier to steer. My son got a little frustrated when we had him riding on it with the swivel wheels at the back, making it harder to steer, but once we flipped him (and the top) around, he was good to go. Now we just pay more attention to make sure the swivel wheels are facing forwards.

The other thing we like about the Jetkids suitcase is that it is top opening (and top loading), as opposed to a clam-shell. That is actually key on an airplane (or train or ferry) because you can have it on the floor in front of your child’s seat, easily take off the top and get things in and out of there. (Tip: if you organize your kid’s stuff in a couple packing cubes, it makes it even easier! Check out our packing lists to make sure you don’t forget anything!) From experience, I can tell you that opening and closing the Trunki with its clam shell design on a plane is a pain.

The only downside of the JetKids suitcase is that when you have the longer strap on, if it’s slack (i.e. not being used by an adult to pull the suitcase), it easily gets stuck in the wheels, impeding its maneuverability. After a few frustrating incidents with the long strap getting caught in the wheels, we decided to remove it and store in the suitcase.

As a flybed, the JetKids Bedbox is a great innovation. Like the First Class Kids and Fly Tot inflatable pillows, the idea is to take advantage of the legroom area in front of the child’s seat to create an extended surface on which the child can stretch out and/or lie down. But while the Fly Tot and the First Class Kids are basically inflatable, ottoman size pillows, the Bedbox uses the suitcase as a support and has a thin mattress. Basically, you flip the top of the Bedbox and adjust it to the height of the seat. Use the long strap to secure it to the seat legs so it doesn’t roll around. Then you pull out the extension to fill the gap and create as long a space as possible for your child to lie on. Over that you put the thin foam mattress which includes a couple foam “guard rails” that you can velcro on. The guard rails are actually a brilliant innovation because they acted as a subtle reminder for my son to stay in his space. With the inflatable pillow, at some point during a night flight he would invariably slide off.

According to my 4-year old son, “The [Bedbox] mattress is more comfortable than the inflatable pillow. It’s easier for me to sleep on the plane with it.”

If you are going on a trip on which you don’t need the flybed (like going on a road trip), you can just take out the mattress and leave it at home. The suitcase then has more than enough room to pack clothes, toiletries and toys for a weekend trip.

All in all, we love the JetKids Bedbox! Not only does it combine two products which we used previously, but it also has significant improvements to both. We highly recommend it!

They also have a combo product with a crew bag and matching JetKids Bedbox! Check it out below! Comes in multiple colors! 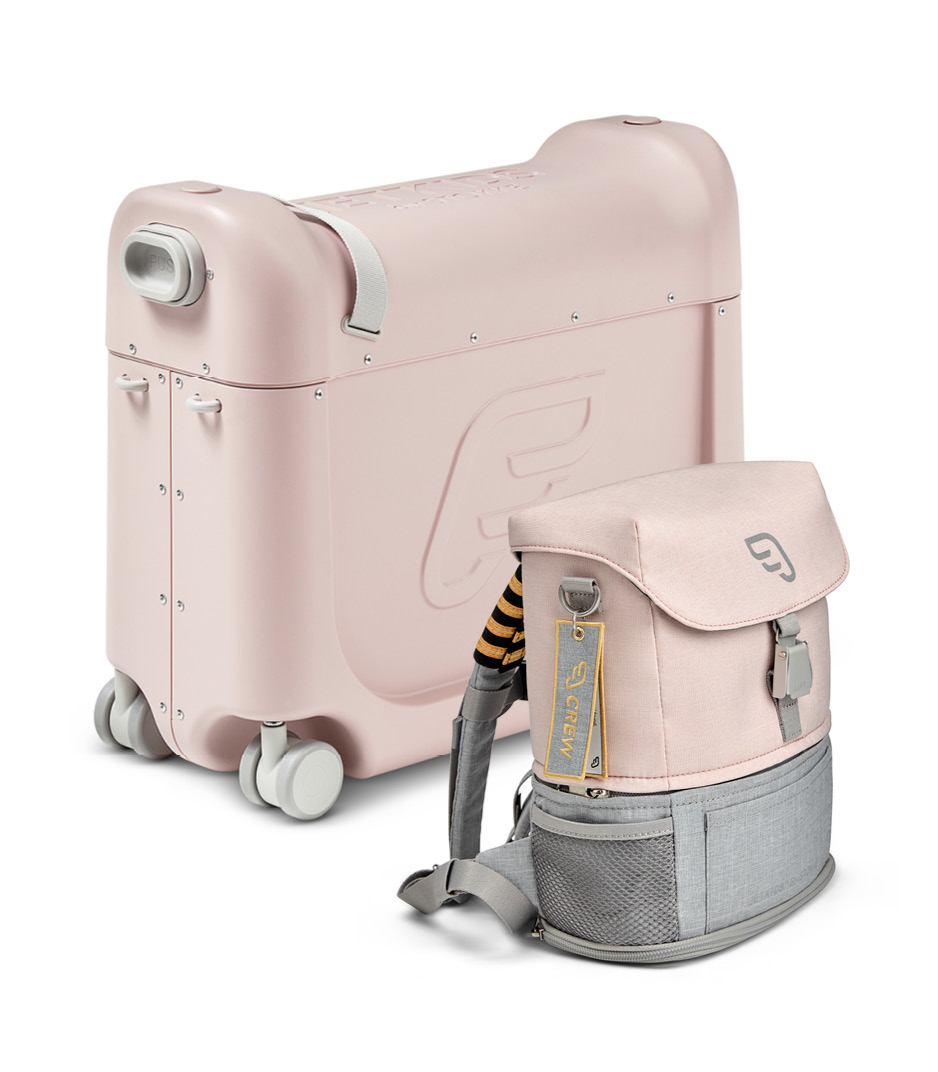 Disclosure: We received the product free for review. The fact that we received it for free did not influence our opinion of the product.

The Classic Jetkids BedBox comes in grey with red or blue detail.
The JetKids by Stokke collection comes in Pink Lemonade, Blue Sky, Green Aurora. It has anti-slip mattress, additional set of stickers, and 3L extra of storage inside the lid.
The RideBox is the world’s premium ride-on suitcase without a bed function or mattress. There is the option for people to upgrade this to a BedBox by purchasing the Sleeping Kit at a later date.
All products are available on the JetKids website.

(she/her/hers) Marianne is Bébé Voyage's co-founder and CEO. Born with 3 passports and with friends and family around the world, it's not surprising that she's always been a traveler. And it didn't stop when she had kids. Her first son was born in Stockholm, Sweden. At 6-weeks he flew to Paris to visit family, before moving to Mozambique a week later. That's how Bébé Voyage started...
All Posts »
PrevPreviousEscaping the Crowds at Popular Destinations
NextA Day in the Life of Expectant Mothers in NamibiaNext

Get your Complimentary Ticket to Celebrate Earth Day