Going on Safari with a Baby

Going on a safari with a baby is possible… and even fun, believe it or not!

During our time in Mozambique, we had the opportunity to explore a lot of safari, game and national parks through out Mozambique, South Africa, Swaziland, Botswana and Namibia. Below are a few comments based on our experiences of going on a safari with a baby. Note that we’ve been to all of these with our son under 2 years of age, so some of our requirements might be different than yours.

When we did all of these trips, we took malaria pills for Botswana, Mozambique, and Namibia. South Africa and Swaziland were malaria-free at the time, but be sure to check with your travel medicine doctor or a local medical practitioner for the latest health guidelines.

And no matter where you end up going on safari, be sure to read up on traveling with your car seat, so you know what your options are!

Khama Rhino Sanctuary: A lovely little reserve which allows self-driving and has rustic chalets and camp sites within the park. Self-catering and restaurant serving breakfast, lunch and dinner as well as modest camp store available. Our favorite part was going for sunrise and sunset drives to one of the main pans which offered numerous rhino sightings. 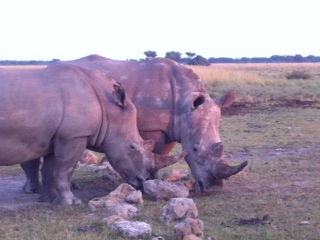 Gorongosa: Mozambique’s top safari park which has been undergoing an intensive animal re-introduction program. (This was the subject of a recent PBS documentary.) All guests must stay in the park at either their Montebelo Hotel (previously Girassol) which has a number of cozy hotel rooms, the larger rondavels or at the camp site, all grouped around the swimming pool and main restaurant which has good (i.e. speedy) service and friendly staff. They don’t (yet) allow self-driving, but they did have closed 4x4s in which meant we could still go on safari with a baby (in a car seat!). Sightings included elephant herds and waterbucks, but we were most impressed by the scenery which had more jungle-like vegetation alternating with vast expanses than other parks we’ve been to. We did notice that the animals were more skittish here, running off as soon as they noticed us. They also offer some alternate activities, including a visit to the local community.

Etosha: Namibia’s best known safari park whose salient characteristic is vast empty salt pans and grassy plains with herds of animals that stretch for kilometers. There are both accommodations inside the park and at several of the gates. (We stayed in a rondavel at the very kid-friendly Onguma Game Reserve just outside the Eastern-most gate.)  We did both self drives so we could go on safari with our baby and drives with rangers in open safari jeeps, alternating while the other one stayed with our son as they didn’t take young children. Highlights included spotting some lion romance and cheetahs on the hunt.  The roads were mostly gravel, but quite good. We had our Toyota Landcruiser, but you could probably get around the Eastern and Southern parts of the park in a standard car during the dry season. 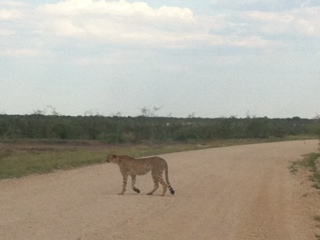 Vingerklip:  We stayed in this private nature reserve while exploring Damaraland in central Namibia. It’s primarily known for its dramatic rock formations but also includes giraffes, oryxes and other antelopes. One of the perks is that it is possible to hike around the park and get closer to the animals, but it’s best to do so early in the day as it gets very hot later on. It has its own lodge on the premises which includes a full-service restaurant as well as the Eagle’s Nest Restaurant atop one of the rock formations which is only open when there are enough guests at the lodge. 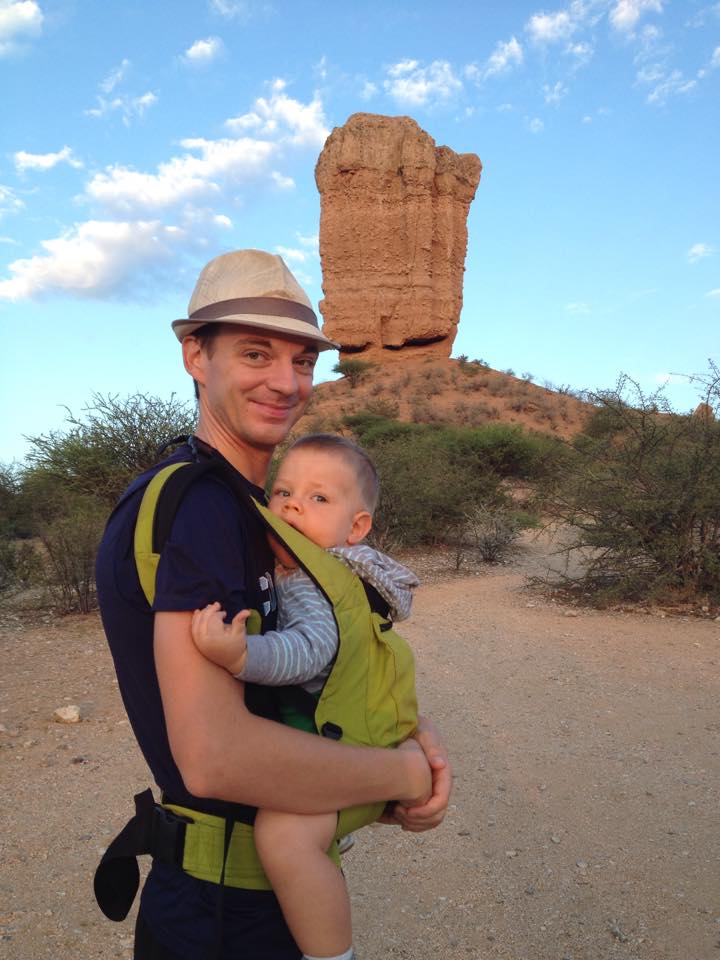 Sossussvlei: Not so much a safari park as a natural reserve, Sossussvlei is best known for its dunes, but we did spot a lot of oryxes there as well. We also did a “small five” walking tour in which we climbed around one of the dunes (Simon in a baby carrier) and a guide showed us scorpions, beetles and other creepy crawly creatures. While there are no accommodations or restaurants in the park, we stayed in a tented camp right at the gate which we quite enjoyed… especially as it had a swimming pool. 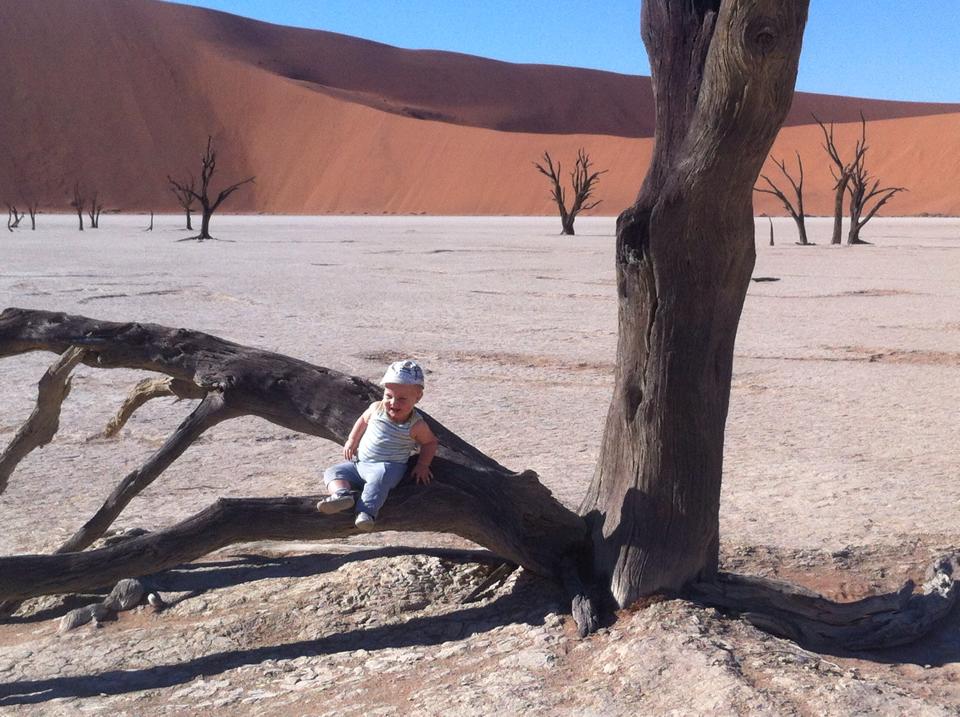 Depending on how many parks you plan to visit/ how many days you plan to spend in South African Safari Parks, it may be worth it for you to get a SANParks WildCard which gives you a reduction on the entrance fees (some are even free!) and makes going on safari with a baby even more affordable. Some parks will even let you in free with the WildCard. Note that if you are a couple going on safari a with a baby under 2 years old, you should get the couples card and NOT the family card (they don’t exactly make that clear on the website). Also note that Table Mountain in Cape Town is part of the SANParks network, so if that’s on your itinerary, the WildCard may be worth it!

Hluhluwe: Located on the Elephant Coast, Hluhluwe is a top safari destination in South Africa. We drove from St Lucia as it is the closest major game park in the area. As we came in the dry season the landscape was pretty barren, which is typically a good time to see animals gathering around the water holes. However, we did not have much luck the day we were there, although we did have lunch at a great picnic spot in the park overlooking a river where we saw hordes of buffalos as well as antelopes. Some of the other people who were at the same spot managed to glimpse a leopard, but apparently our binoculars were not as strong.

iSimangaliso: This is a huge wetlands park with impressive diversity, from the vast quantities of hippos and crocodiles around St Lucia, to the sea turtles closer to Kosi Bay next to the Mozambican border. The Cape Vidal area is gorgeous, with a combination of rhinos, buffalos and other animals and beautiful landscapes and beaches. A variety of accommodations and restaurants can easily be found in St Lucia, whereas the northern part of the reserve offers more rustic options. This is a great option to combine safari with a baby along with a bit of beach time and staying in a walkable town.

Tembe: The main attraction are the elephants but there are also lots of antelopes. The lookouts from the hides provided the most prolific sightings for us, where elephants enjoyed the waterholes during dry season. Make sure that pack food as there are no restaurants (but there is a nice picnic spot). 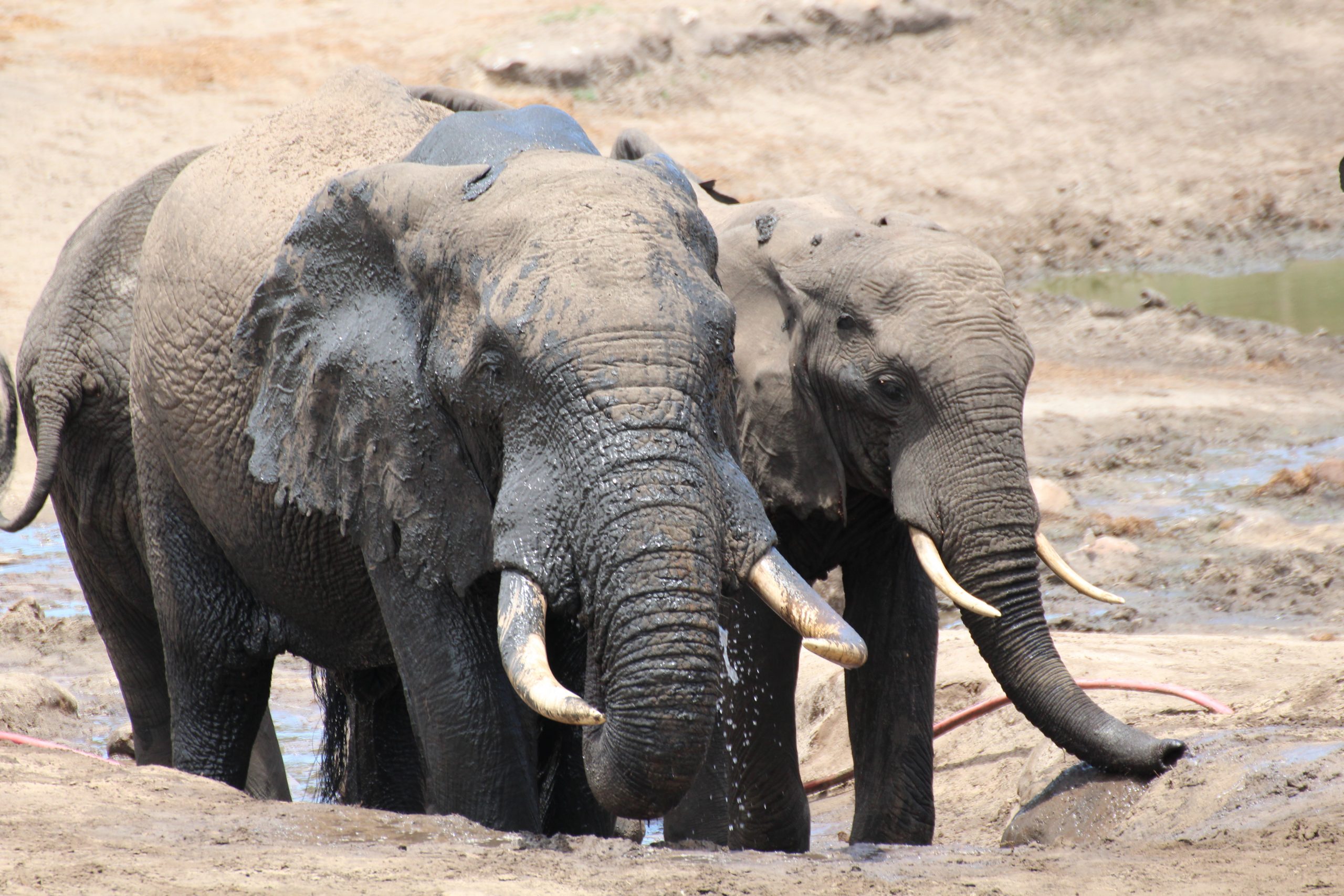 Ndumo: Located close to the borders with Mozambique and Swaziland, this park is primarily known for its abundant birdlife. There are a couple of beautiful look-out spots with views of surrounding wetlands, with flamingos and crocodiles as well as birds. In the rest of the park we saw giraffes and antelopes but none of the Big 5. There are chalets and campsites available in the park, although we didn’t stay there. Nice for a tranquil safari with a baby, especially if you’re an orniphile.

Spioenkop Nature Reserve:  A lovely small reserve on the Spioenkop Dam, an easy drive from the Central Drakensbergs. It includes walking trails so you don’t have to spend the whole time in the car. There are also picnic and camp sites on the water not far from where giraffes come to drink. We also spotted a number of antelopes and zebras in picturesque settings. No food or drink available for purchase.

Kruger National Park: Kruger is one of the world’s best known safari parks and is certainly the one with the most amenities that we’ve visited in Southern Africa. This is definitely a great option for a safari with a baby! As it’s about 65 km across and 350 km long, we’ve only had an opportunity to explore the Southernmost areas of it. The eastern edge of the park runs along the Mozambican border and the southeastern gate is a mere 2 hour drive from Maputo, so needless to say, we’ve spent a lot of time there, sometimes even opting to drive through the park because the quality of the roads is so good. Kruger certainly attracts more safari-goers than we’ve seen in any other park which has it’s pros and cons. On the one hand, the animals are quite accustomed to having cars around which means that they don’t scare as easily and are more likely to be hanging out by the side of the road. On the other hand, you’re unlikely to be the only car stopping to check out an animal and sometimes you feel like you’re sighting more cars than animals. But that also means that if you see a swarm of cars, you know there must be something interesting. On our most recent visit we were able to see a leopard and a lion only because we saw a bunch of other people gawking out their car windows and asked them what they were looking at and where the animal was located. But it is definitely not hard to spot animals there. On any given visit we’ve seen elephants, rhinos, buffalos, zebras, various antelopes, giraffes, crocodiles etc., without even trying. Kruger also offers a number of different accommodations, restaurants and picnic spots within the park. We spent a couple nights in a rondavel and were treated to elephants having their dinner just on the other side of the fence from where we were having ours. SANParks accommodations book fast, so if you want to stay in the park, be sure to check their availability early! Also, check out our review of Seringa Lodge, 45 minutes away from the park gates, and one of our favorite lodges in Southern Africa. 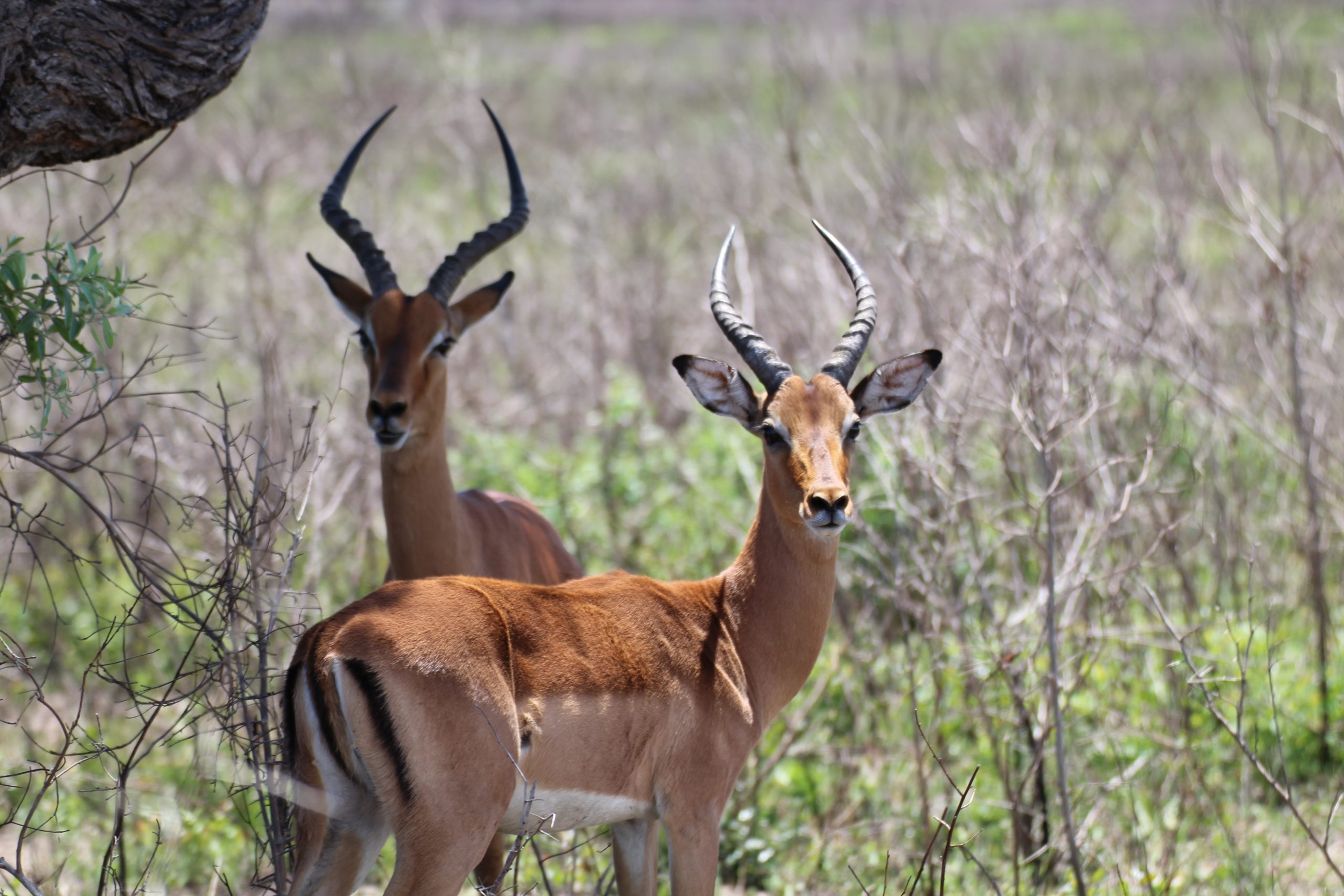 Hlane: One of the oldest parks in Swaziland, it has a nice restaurant from which you can see rhinos grazing (you’ll have plenty of time to enjoy the view as service is slow!). It is possible to self-drive around several separate sections of the park, where you can see giraffes, elephants, etc.  The park is quite manageable and easy to get around over the course of a day.

Mliwane: Like other parks in Swaziland the main draw is not so much the likelihood of seeing big 5 animals but rather that these small-scale parks enables you to get closer to the animals in a more personal way, especially as there are fewer tourists around. This is quite an attractive option when going on safari with a baby. It is possible to camp in the park or come for the day and enjoy the restaurant.

No matter where you end up going on safari with a baby, here’s Bébé Voyage’s roundup on traveling with your car seat, so you know what your options are!

(she/her/hers) Marianne is Bébé Voyage's co-founder and CEO. Born with 3 passports and with friends and family around the world, it's not surprising that she's always been a traveler. And it didn't stop when she had kids. Her first son was born in Stockholm, Sweden. At 6-weeks he flew to Paris to visit family, before moving to Mozambique a week later. That's how Bébé Voyage started...
All Posts »
Become a member
PrevPreviousHidden Gems: An Island Oasis in Western Europe
NextBuddyphones Children Headphones // ReviewNext