Meet Sandy, a recent and very valuable addition to Club Bebe Voyage! Having traveled with her now older step-children, Sandy is uniquely positioned to talk to us about the benefits of travel at such a young age. It sounds like her kids have turned out quite well! Sandy talks to us about the merits of exposing children at a young age to exotic cultures, her laid-back attitude towards travel, and her new life with her husband and youngest daughter (two years old) in Thailand. 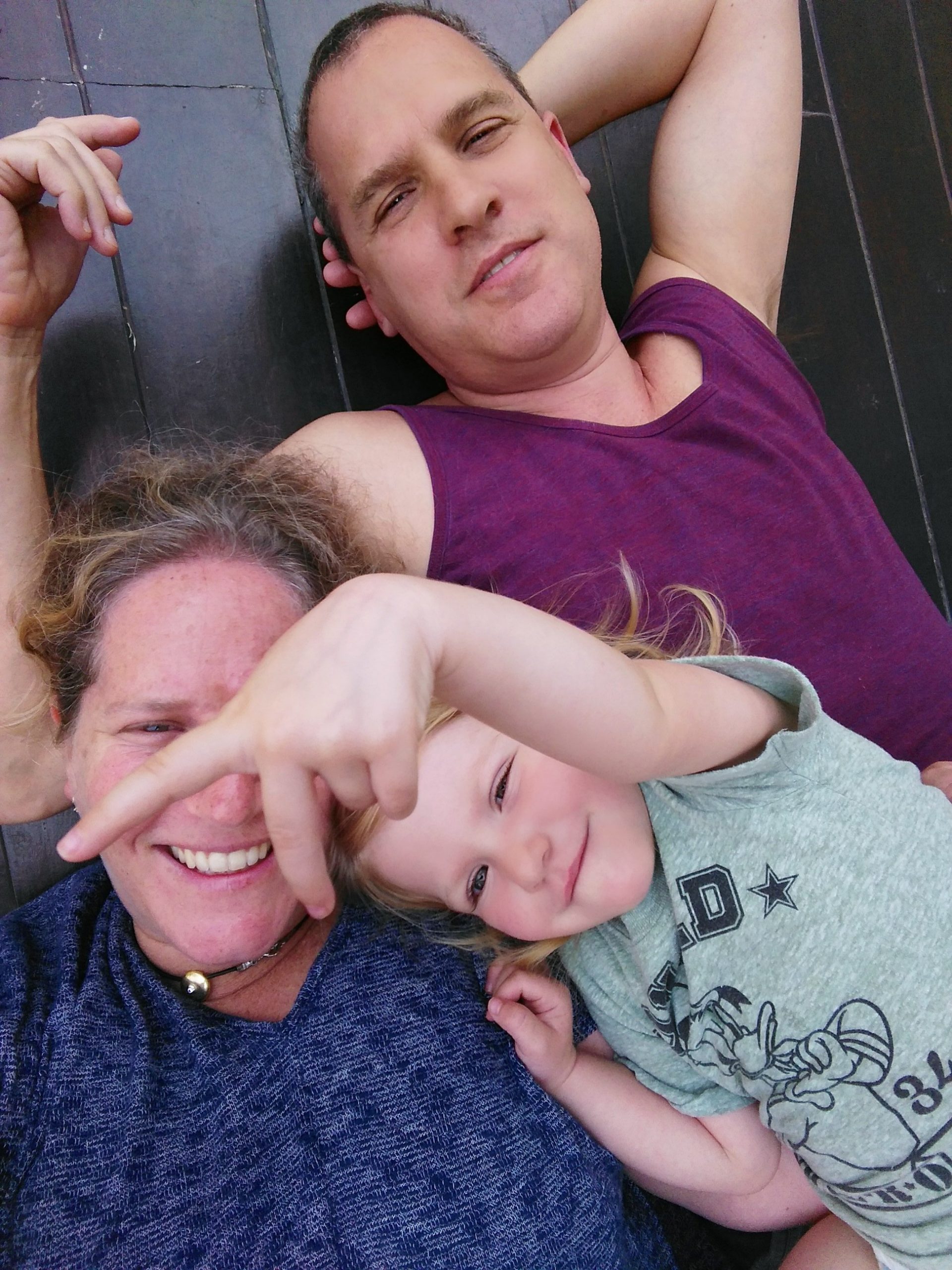 How did you come across bebe voyage?

I was introduced via a friend.

Where are you from originally and where are some of the places you’ve lived?

I was born in Zimbabwe, my husband in Israel.  I have had the privilege of living in Zimbabwe, South Africa, Israel, and now, Thailand.

How old are your children and do they love to travel too?

I have three step children, a 24-year-old daughter, 22-year old son, 18-year-old daughter, and now they a new little sister who is two years old.  The older children adore traveling.  We were always traveling with them and most of the time would select destinations in less developed countries and off the beaten track. I think they got the travel bug from us. They say it’s very catchy.

Have the older children also been traveling since babyhood? If so, how do you see the impact of their traveling as babies affect their young adult life? Was it all worth it? 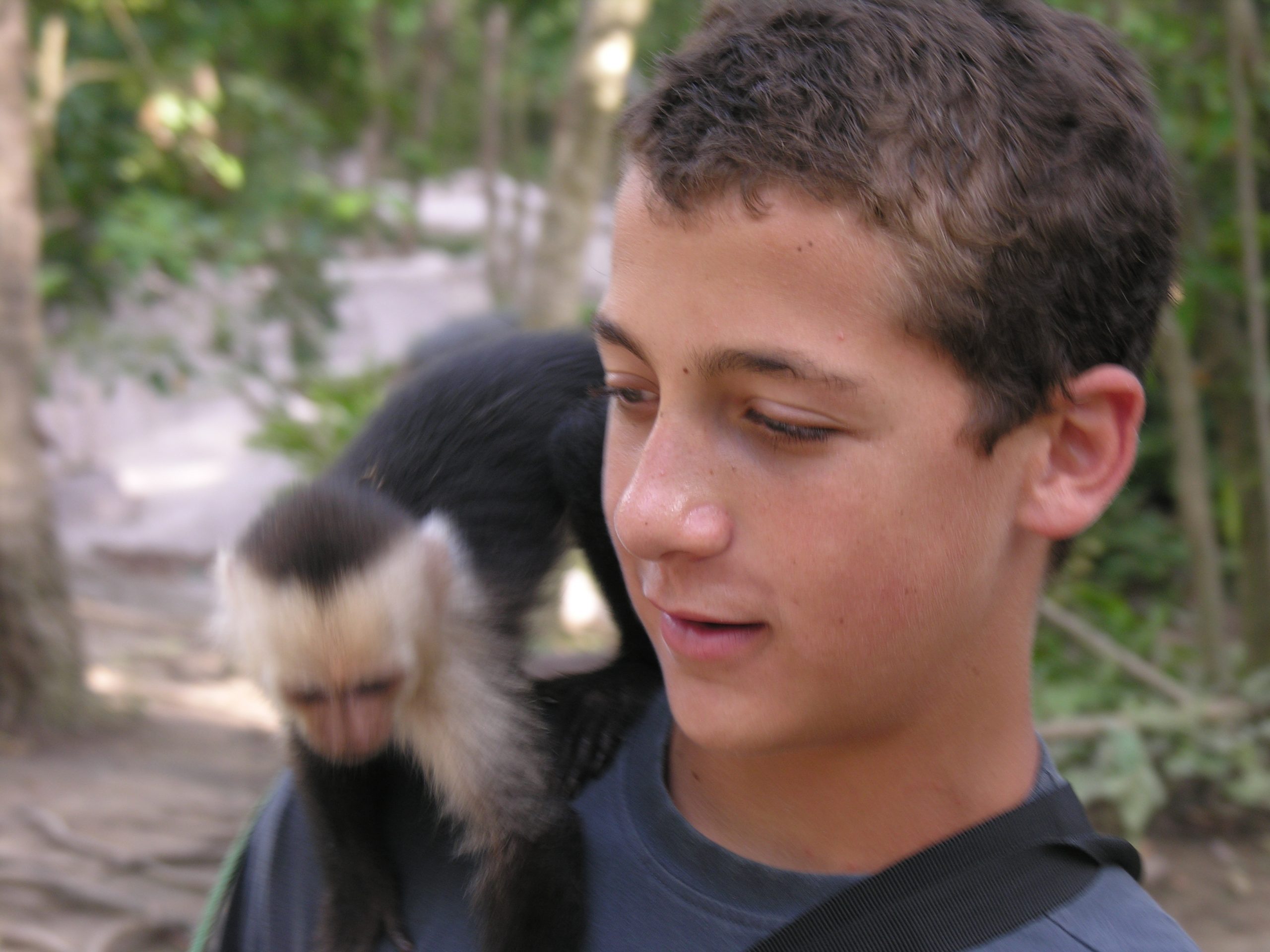 I think if you introduce new smells, tastes, cultures into someone’s life at an early stage the outcome will be a more flexible child. For example, you hear about kids who won’t sleep anywhere but their bed. I usually find these kids to be the ones that have never slept anywhere else but their bed for the first years of their life.

I really do believe all my children are more open and adaptable to changes because they have been exposed to long distance travel to new and exotic places from the earliest of stages. My two-year-old daughter, Dylan, has slept out on the beach, in tents, kids’ camper beds from as early as four months.

I do realise that personality can have a lot to do with it, and some children will be more difficult. But having said that, I’m a firm believer that calm and laid back parents will generally raise calmer kids, thus making change such as travel an exciting adventure rather than a stressful mission that can wait for ‘when they are older’.

How do you balance introducing children to new things, while keeping them entertained? Do you find yourself having to give up on certain things you would have done prior to having children, or not? 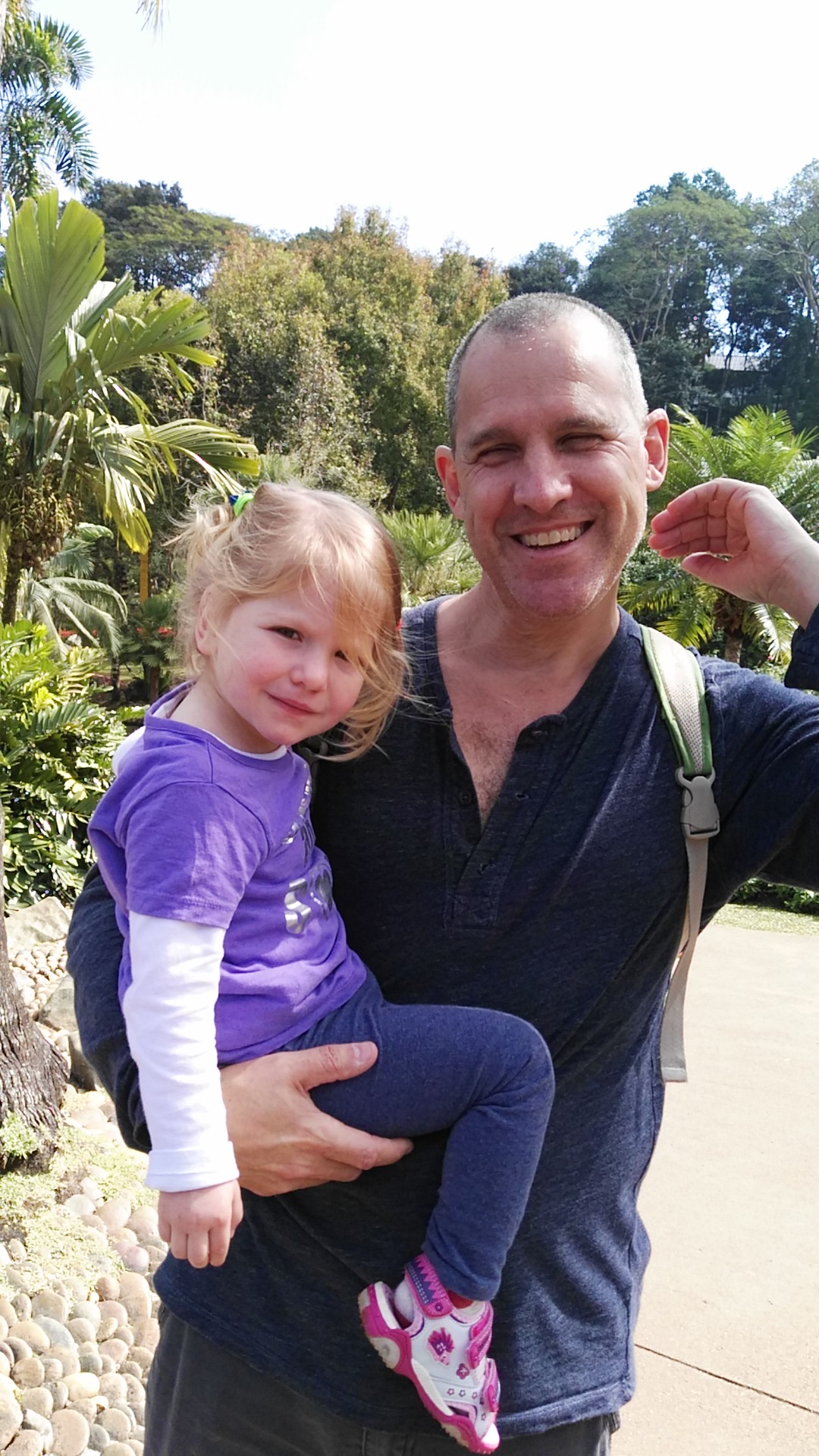 In general, I believe children should adapt to your life and not the opposite.  However, having said that, we definitely go out less at night.  I prefer to stick to a routine when it comes to bedtime.  There are times where we will drag it out and go out at night together with our youngest. On those occasions I try to make sure she gets a good nap in the afternoon allowing her to generally stay awake and cheerful.

You give up on some things once there is a baby in the house and gain others.  Everyday for our two-year-old is a new experience just as it is for us. Introducing her to new things is part of the entertainment.

Where are some the places your children have been? Are there any destinations that you regularly go back to (maybe for family reasons) or are you constantly trying to discover new places?

As mentioned earlier, the older kids have been travelling with us from a very young age. We always tried to be as laid back as we could when it came to long journeys to show them that it wasn’t a big deal. We love adventure holidays, both my husband Ady and myself are certified divers and we introduced the older kids to scuba diving from as early as seven years old. 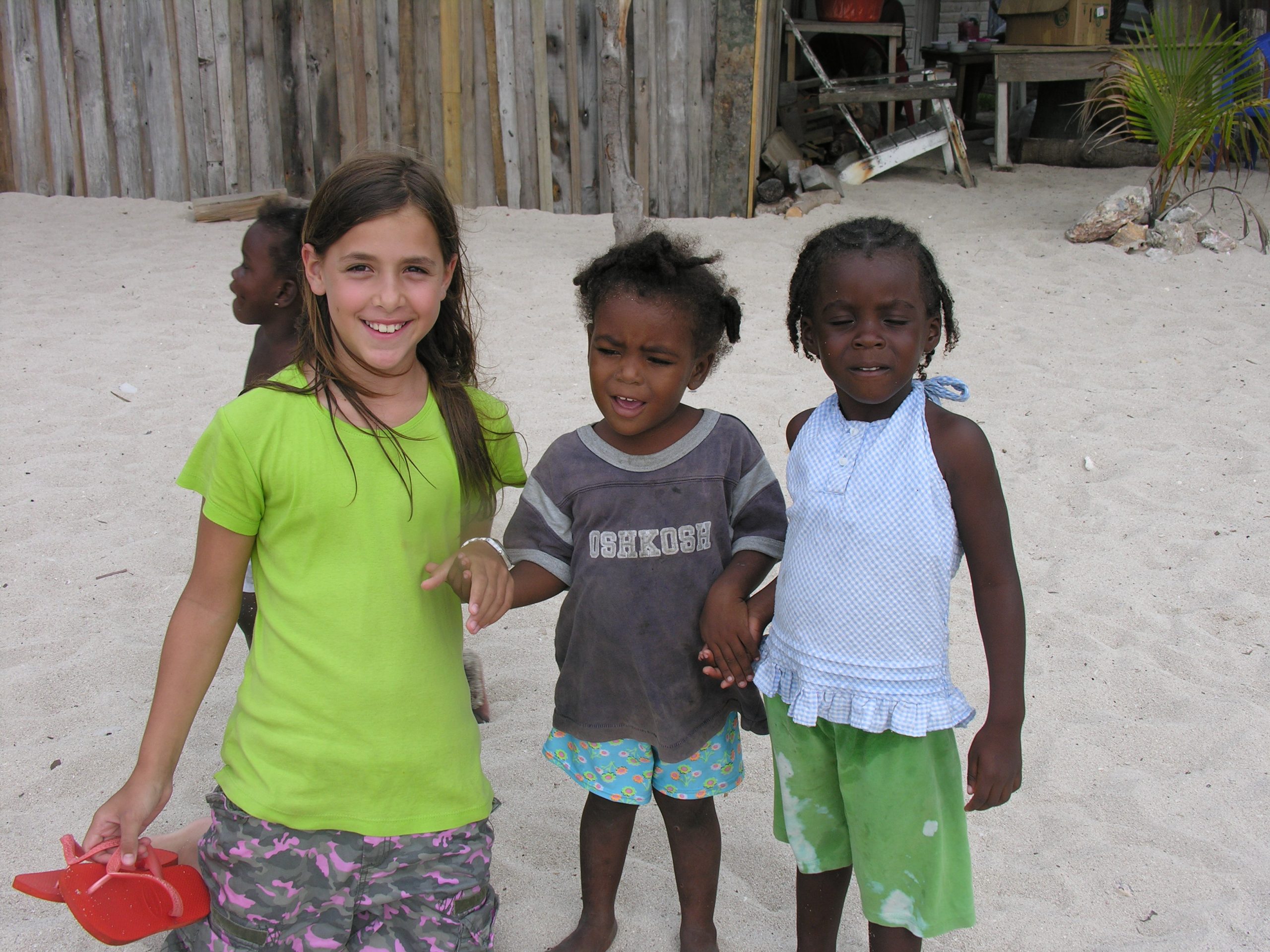 We also both love countries with very different cultures to our own and so would seek out destinations based on culture.  We would not let a long plane ride with many connections deter us.  Our preference was also to change destinations each year to discover a new part of the world.

I am not sure if traveling was so easy for us, because, the parents, were relaxed on the journey, or if we were simply lucky to have such easy-going kids.  I assume a mix of both.

We do, however, try to go to Cape Town and Italy, as often as possible as my parents live in South Africa and Adys mom spends lots of time in Italy  and we like to join when we can.

Where are you living now and what is the reason for your move there?

We are currently in Thailand, Chiang Rai, up in the north.  We have come with our two year old, as the older kids have already spread their wings, studying and traveling.  We have always wanted to live in a foreign country and adore South East Asia.  We were looking for a region that does have a small winter so we could enjoy cooler weather, as opposed to too hot year-round. We were also looking decent schooling, hospitals and a good internet connection.  Based on those criterias Chiang Rai fit the bill.

So far, have you found Northern Thailand to be a great destination spot for children? If so, why? What are some of the places you’ve discovered and that you recommend people take their children to?

We are still quite new to Chiang Rai.  Just over two months to be exact. We have slowly introduced our daughter to a new kindergarden.  When she’s not at school, we take her swimming to different pools.  The weather is always hot, so that is an advantage.  She is still quite young to enjoy all that northern Thailand has to offer.  For instance, there are many waterfalls to hike, but I think they are too difficult for her to do by herself.

What has been your favorite place (country/city/region)  to travel to with your children so far? 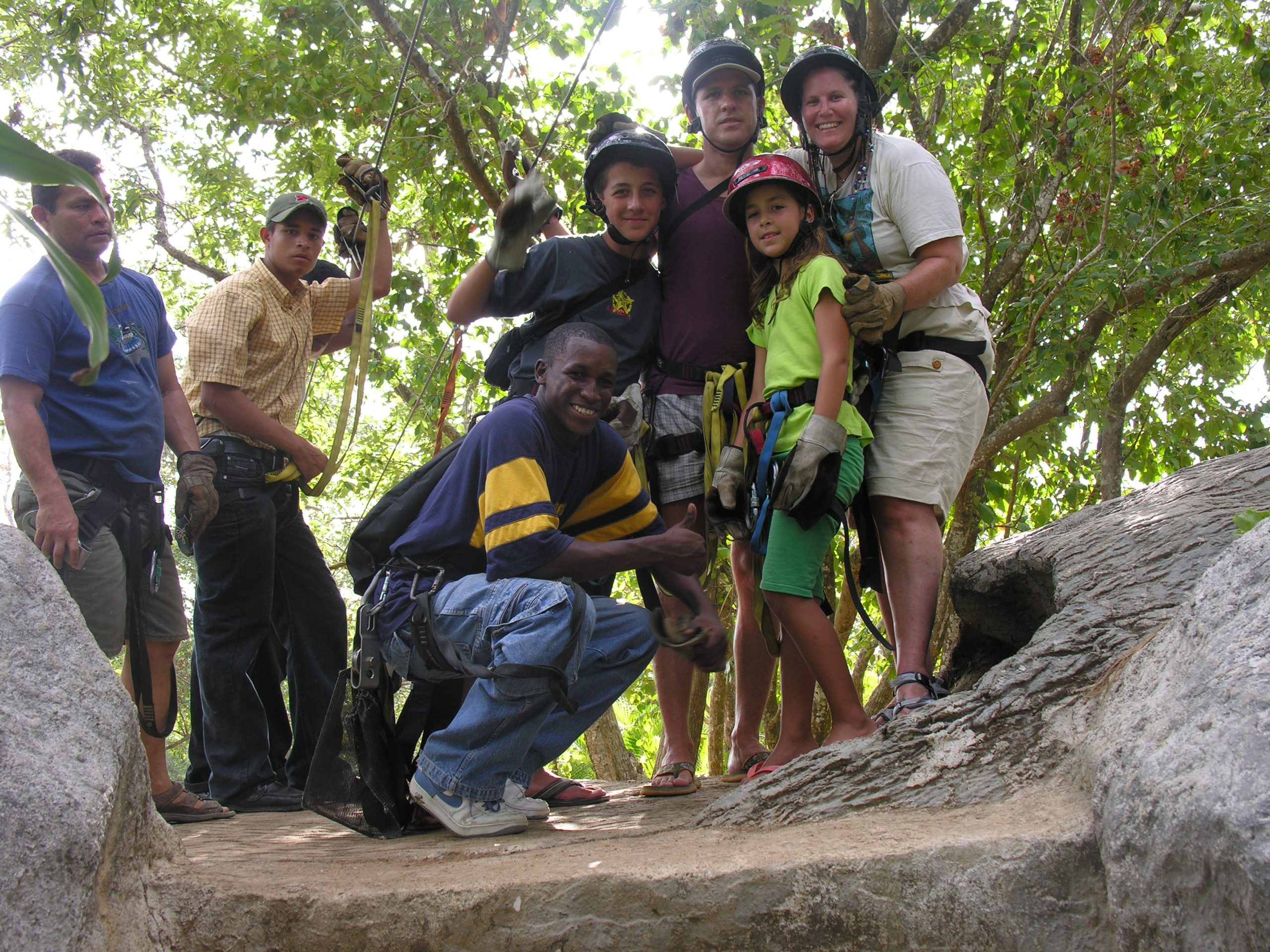 I would have to say one of my highlights travelling with the kids was Honduras.  They were about eight and twelve years old.  Honduras has great diving.  We stayed at a place that offered white water rafting, rock jumping, swimming with the dolphins–a highlight, and an amazing zip line.  Travel was a bit rough and the distances were long, but we turned it into one big adventure and the kids loved it.

What is their favorite place so far?

I think they would answer either Honduras or Micronesia.

Since you spend so much time in different countries, can you talk to me a bit about some cultural differences you may have noticed when it comes to bringing up little ones across those countries? Do you find that the attitudes towards traveling with little ones differ too? What about Thailand in particular?

I would say bringing our two-year old daughter was a big cultural shock for her. It’s been a particular challenge for her to attend kindergarten where she is exposed to a new language and she is already learning two languages at home.  In addition, culturally one takes off their shoes before entering any home and my daughter has found that particular custom quite difficult.  But after a few weeks, she’s come to accept it and now does it with no problem.

Food is another one, but it’s great as it encourages kids to be more experimental.  They see you trying new things all the time and they want to be part of it.

Is there a cuisine that you think is particularly child-friendly?

That’s a tough one… I would say all kids like Italian, nothing like spaghetti in a sauce 🙂

Is there a particular app/travel gear (baby carrier/stroller or whatever) you have found particularly useful?

We have traveled quite a bit with Dylan, our youngest, and we learnt fast to travel light.  We took a baby Bjorn and never really used it.  A light-weight stroller is a must. It makes life easier when transferring through an airport and getting around with luggage.

For the actual plane journey, I always bring stickers, one or two books, a tablet set up with lots of games and shows, and for the rest, you go with the flow…

Is there an airline you have found to be particularly kid-friendly?

I find them all pretty much the same.  The fact that they might hand out a gift is irrelevant.  We come equipped with snacks and treats and all you need is understanding neighbors on the plane and that is always a gamble!

All Posts »
Become a member
PrevPreviousMeg — Why Having a Child Didn’t Stop This Traveler From Traveling
NextMathilde: Traveling Long Distance with Toddlers Is PossibleNext