Singapore faces a growing crisis due to COVID-19. Dustin Lau, co-founder of Kommerce.com, shares his family’s experience of living in Singapore during the pandemic.

The views and opinions expressed in this article are those of the author and do not necessarily reflect the official position of Bébé Voyage.

Could you tell us a little about your family?

My wife Karen and I have a 4-year-old named Jun. We work together in a financial technology (fintech) incubator Kommunity Ventures and for our fintech startup kommerce.com.

Where were you when the coronavirus outbreak started?

We were in Singapore during Chinese New Year when the news broke that the Chinese government had started a lockdown in Wuhan.

How did the outbreak affect the area you live in?

Singapore contained the virus very well at the early stages of the outbreak. The decision to implement travel restrictions early on (on the same day the World Health Organization declared a global health emergency) played a big part in that.

We were the first Southeast Asian country to implement travel restrictions (at the same time as Macau, one day after Russia), at great political risk. Some Singaporeans felt it was too late, but with China being our largest trading partner, political realities do exist. We are a small country which is heavily reliant on international trade for our supplies. In contrast, Russia shares a huge border with China and is a superpower in their own right. With energy and food self-sufficiency, they could make that decision far easier than we could.

What has been your experience?

My wife Karen has kept us ahead of the curve. She’s predicted and anticipated every major change weeks in advance, including the DORSCON (Disease Outbreak Response System Condition) upgrade, Malaysia’s border closure, and non-essential company and school closures so we’ve practiced social distancing measures and kept Jun out of school months ahead of them becoming mandatory measures.

How has your childcare/job/day-to-day life changed since the outbreak?

We have voluntarily kept Jun out of school since Chinese New Year. She sees both sets of grandparents frequently. In our opinion, the downside risk of infecting them does not outweigh the benefits. She’s at an age where missing school isn’t the end of the world and we’ve taken her out of school for holidays before.

What is happening now?

Singapore’s performance in containing the virus has come under some strain in the past two weeks. Part of this can be attributed to imported cases from the return of citizens and permanent residents from other countries. What is worrying now, though, is the rising number of unlinked cases, which suggests an iceberg of asymptomatic carriers that our practice of only testing suspected cases has not detected.

There is an excellent web comic by a Singaporean comic artist, Sonny Liew, which depicts this very well 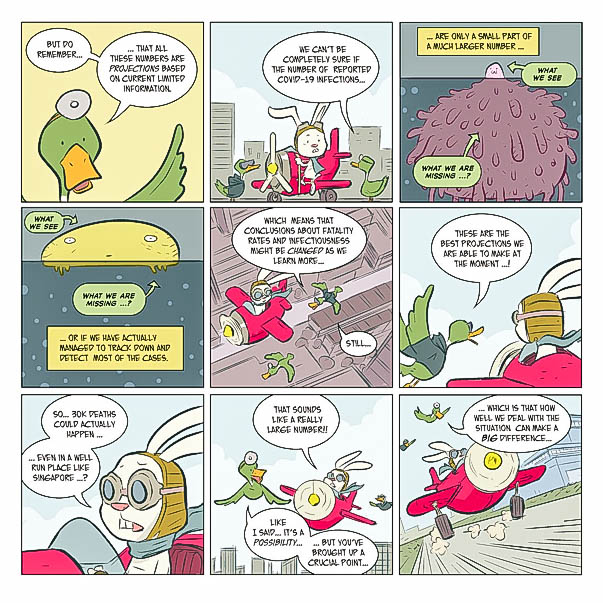 Initially, Singaporeans were panicked. They hoarded groceries, masks, sanitizers and shut themselves in when the government upgraded to DORSCON Orange, but have since gone back to life as usual. In my opinion, there is a little too much complacency as there are still large crowds in Universal Studios, malls, and restaurants for example.

I’m sure readers in countries experiencing lockdowns are shocked that such attractions are still open here, as they will be shocked to know that there have been no mandated school or office closures since the epidemic began. Bars, clubs and attractions like USS (Universal Studios) have only recently been shut down as of March 26 at 23:59.

Prime Minister Lee Hsien Loong announced on April 3, 2020 that non-essential businesses are to close from April 7 to May 4. Schools are moving to home-based learning from April 8 to May 5.

How has the public responded to the new measures the government has put in place?

Initially, people panicked when DORSCON Orange was declared. Then they relaxed. Some people are staying at home, but far too many are out and about for non-essential reasons.

More distancing measures have been enforced since but some clubs and nightspots took that as a cue to organize “one last party”.

The new measures were paradoxical: we heavily curtailed the movements of working adults while schools continued. There’s really little point to social distancing measures for adults if kids are the main household members who continue to be exposed. This is because kids are also:

Every country that can be said to be on a recovery trajectory (e.g. South Korea, China, Taiwan, Hong Kong) had school closures early in the outbreak. Correlation is not causation, and it’s too early to tell, but Iceland and South Korea’s extensive testing regimes show asymptomatic carriers to be far more pervasive than initially thought. If children are ‘less affected’ in terms of clinical symptoms, it stands to reason they can be a serious vector of asymptomatic spread because you can’t tell if a child has COVID-19 without testing them.

The enforcement of current social distancing measures has already affected the economy by reducing the usable space of businesses. They have increased the physical space requirements of queues for limited upside. Now people are exposed to each other for a longer time in the queues. The economy is already suffering and the infection vector remains open, so I’m not sure what this half-measure will achieve.

Is your child aware of what is going on?

Yes. Jun has been washing her hands to the Vietnamese hand washing song, role-playing as a nurse and making tissue paper masks for her toys. In fact, she often reminds us to not touch railings and wash our hands. We’ve also run her through videos of how the virus works and how water, soap and friction break down the virus cell walls. It gives her more context as to why she needs to wash her hands with the 7-step method. 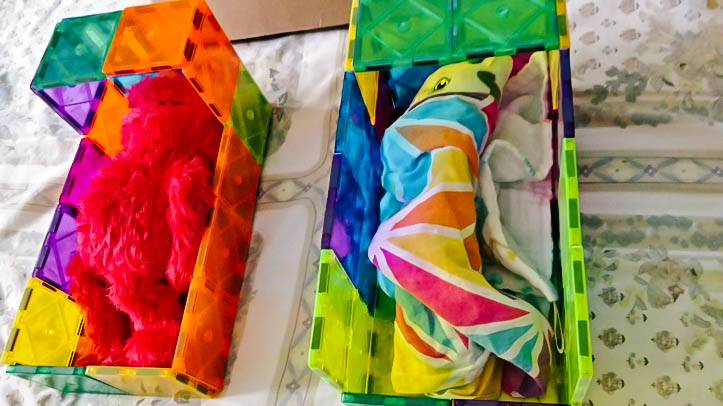 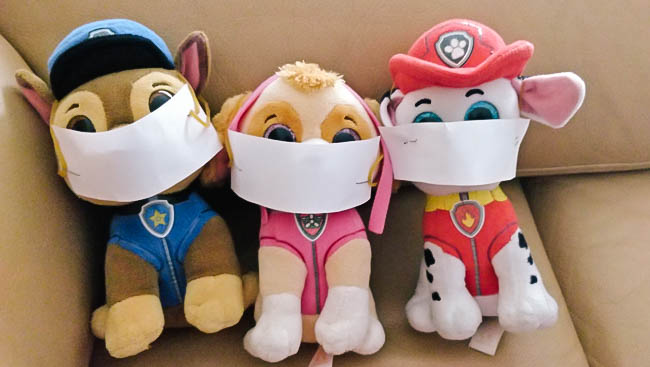 How has your child’s education been affected?

My mother continues to run her through her school workbooks. She’s ahead of the curve for reading and she’s starting to read fast enough to follow the news crawlers. We brought her for occasional playdates in the park with friends who have self-isolated themselves at a similar level of rigor to us.

What has been the impact of the outbreak to your daily life in Singapore?

Karen and I are privileged to be self-employed and have control over our schedule. We had to organize a business meeting and my background in video production and live streaming came in handy. I set up a live stream for foreign attendees, which meant we were able to limit the in-person attendance to local attendees only. Everyone who attended underwent temperature checks and were seated three meters apart. Bento catering was used in place of a buffet. We have transitioned our other meetings to online video calls. I highly recommend Jitsi as an open source alternative to Zoom for people who have security concerns. Zoom has become a high-profile target for hackers now that much of the world has shifted to remote working.

What type of precautions are you and your family taking?

We get most of our groceries delivered. When this isn’t possible, we do essential trips always wearing masks. We avoid crowded places. When we ate in public, we did so off-peak and in non-air-conditioned areas. We want to support local businesses.

If we bring Jun out, we go somewhere outdoors with good air circulation and lots of sun, like the park or beach. We avoid places with bottlenecks, like single entrances, and frequently-touched fomites like playgrounds.

Do you know anyone who has been affected by the outbreak?

We know several people who have been affected:

This is a time for unity. Someone having a different risk tolerance from you isn’t something to be feared or shamed. At the same time, we need to consider if our actions can harm other people and behave with public consciousness to protect our community. There are people who are immunosuppressed/compromised or have comorbidities which make them especially vulnerable to this disease.

Our healthcare workers are braving almost certain infections in some countries due to the lack of personal protective equipment and other essential medical supplies.

People who would normally receive treatment and recover from common medical conditions like diabetes or lupus are suffering or dying because healthcare systems get overwhelmed and their remedies are not available due to speculatively non-conclusive small sample studies.

Please take your social responsibilities seriously so you do not inadvertently harm others. This means:

One more thing: could you suggest something for parents to do at home with their kids?

Here are some ideas:

Enjoyed reading this interview about Singapore’s response to Covid-19? Take a peak at the other conversations we’ve had with families all over the world and how their lives have also been affected.

Also, don’t forget to stay up to date with the latest Covid-19 updates and new through our live post here!

Marley (They/Them/Their) is the Editor-in-Chief for Bébé Voyage. Marley is an avid traveler, food lover and parent to one kiddo. They hold a BA in English Literature and a Diploma in Freelance and Feature Writing with the London School of Journalism. You can find out more about Marley at www.mconte.com
All Posts »
Become a member
PrevPreviousDigital Education For Children During The Covid-19 Pandemic
NextGiving Birth During Covid-19 And The Challenges With A Newborn In LockdownNext