The Hardships Of Traveling As A Pakistani And Muslim Woman

Travel is usually synonymous with the joy of discovering new places, cultures, and expanding our way of looking at the world and seeing how beautiful it really is. Sometimes though, it can also mean having to face additional challenges and hardships because of the color of your skin, sexual orientation, or religion. Maria Ahmad, a Pakistani Muslim, shares her experience of traveling and living around the world with her family.

Q. Could you tell us a little about you and your family? 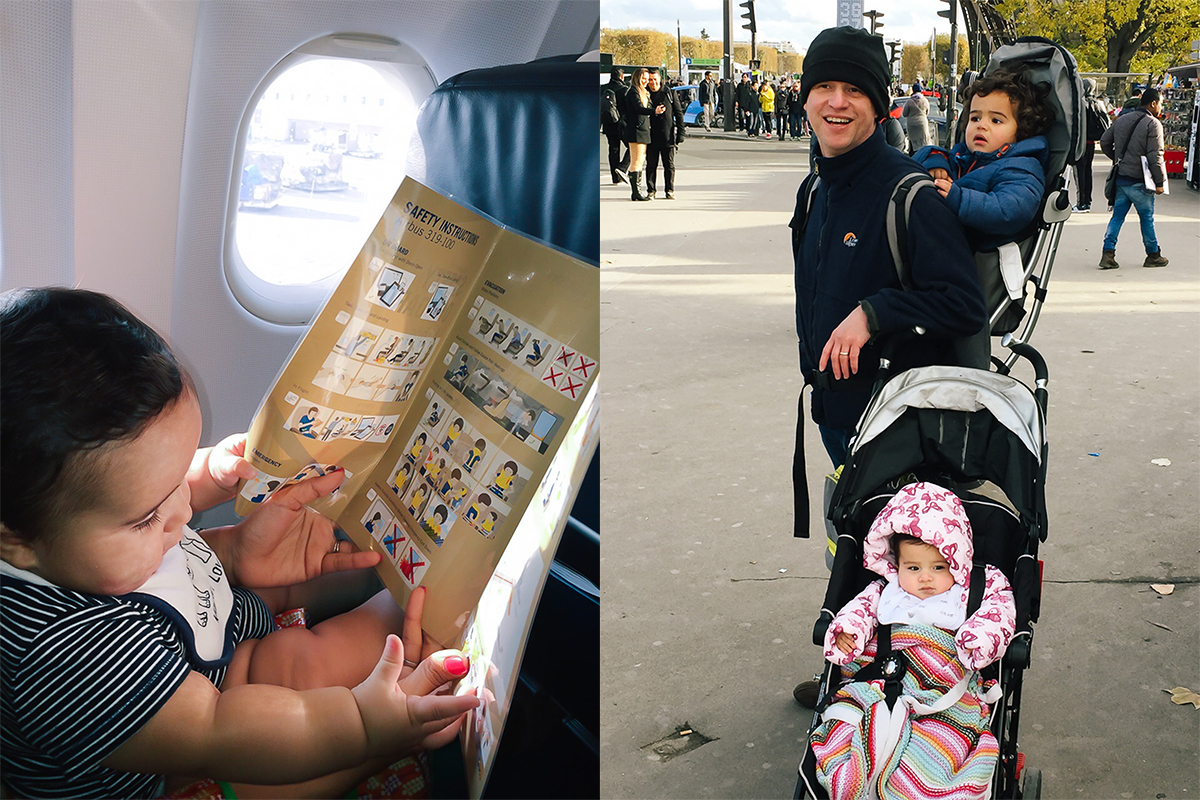 A. We are a family of four with our five-year-old son and four-year-old daughter. I’m a Pakistani, Muslim (as are my children) and my partner is British-Uruguayan. Although currently based in Uruguay, we are a family of nomads. My son was born in Bangkok; my daughter in Pretoria; and my teenage, Pakistani-British-Uruguayan, Muslim step-kids live in and identify with Zimbabwe as home. As for me,  I’ve spent the first 17 years of my life in Saudi Arabia and the Middle East and the rest of it bouncing between countries with my work as a journalist and development professional. Meanwhile, my partner has worked, lived, and traveled to about 50 countries.

Before settling in Uruguay, we were living in Mozambique. Now, I’m currently pursuing a doctorate in migration studies and am a political analyst while my partner works remotely as an economist. Both kids are in school. Half of my family are in California and the other half in Pakistan. As such, we as a family are connected to Europe, Asia, the Americas, and Africa. We consider them all home.

A. Not much stops us. However, one factor beyond our control impacts on the frequency, destination, and feasibility of our family travels–Islamophobia and discrimination applied through visas. As a Pakistani (proxy for Muslim) passport-holder, I’m subject to tremendously discriminating visa policies enacted by different countries. As British and Uruguayan passport- holders, my partner and kids are mostly visa-exempt for many countries. Thus, we can’t travel as frequently or as easily. Travel plans involve months of advance planning and additional expenses for visas. 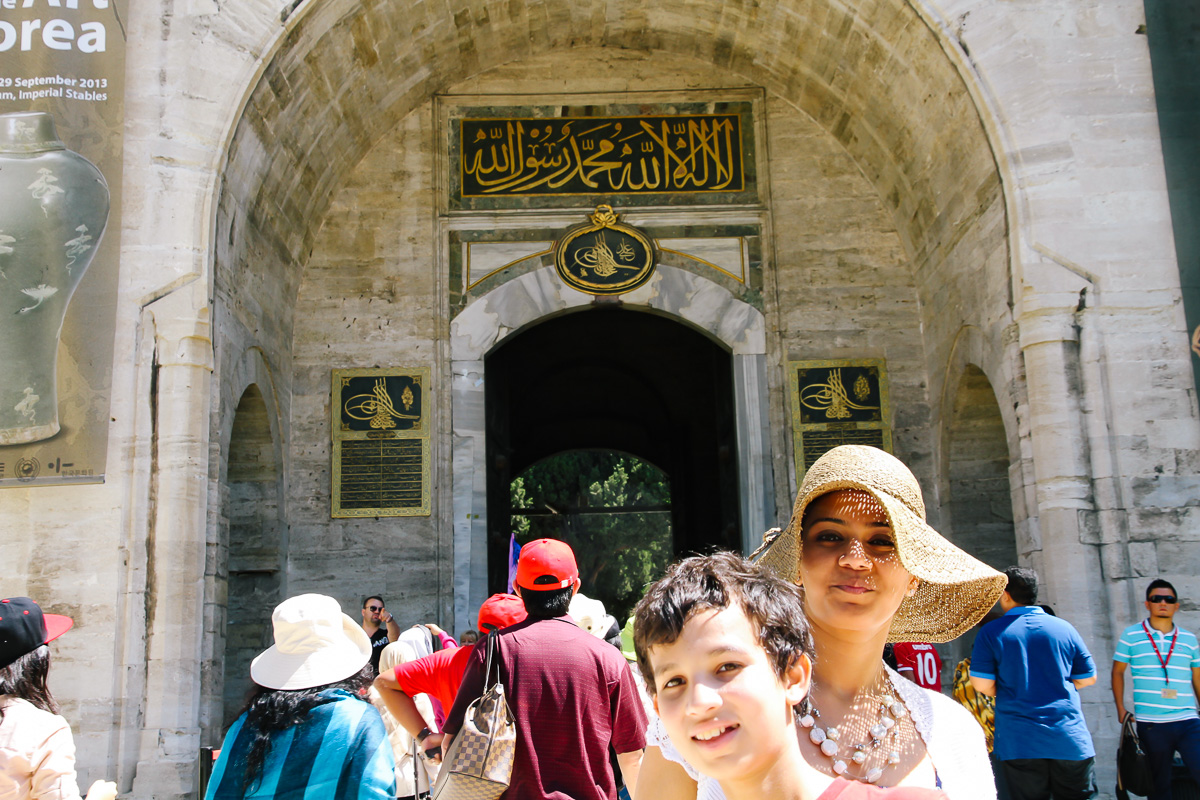 In many cases, despite the law stating otherwise, I’m subject to the interpretation of the immigration officer on duty. For instance,  under E.U. regulations, I’m allowed to transit through any European state if I’m married to a European national (prior to Brexit). But in reality, I can’t. Our travel then brings on tons of anxiety as well while we check and double-check every document (including all the legalese) and carry additional paperwork. While packing, I’m always cognizant that bringing a book in Arabic or prayer beads might be construed as “more” depending on where I’m going. I’m always careful to hide my Arabic tattoo when visiting Europe or the U.S., or of being seen praying during take-off or landing.

I’ve now become used to being pulled out of lines, leaving my bewildered kids behind, for “additional screening” at all airports in the Gulf countries, the U.S., and Europe. I’m  equally accustomed to having my luggage regularly opened and rummaged through as part of a “random check.”

While connecting in Santiago, Chile, on my recent trip to California,  I practically ran through the huge airport dragging two sleepy under five-year-olds and two carry-ons by myself. I could not cater to my hysterically tired three-and-a-half-year-old daughter. Moreover, I had no time to be embarrassed by the people who stood by watching while I put my daughter on my back and my backpack in front and grabbing my two carry-ons with my free hands.

When I arrived at the gate–looking exactly like the crazy image you’ve painted in your head of your own worst moment–the ground crew prevented me from boarding because of an “additional security check.” They made me sit my sobbing daughter down on the floor while I picked apart my carry-ons including milk bottles in transparent bottles and then repacked everything. Due to that extra check, we were the last to board. No surprise, I had no overhead bin to store the kids’ diapers and bottles within accessible reach.

My scariest moment was when, after giving birth to my son in Thailand, the Thai authorities refused to extend my visa beyond a week. My son still had to undergo his basic newborn medical tests, and my visa was about to expire. Thai authorities informed me that I could “leave” my three-day-old baby, fly back to Pakistan, receive a visa in two weeks, and fly back to collect my son. Only a mother can understand the sheer impossibility of leaving her child (newborn, no less!) in such circumstances.

To top all this, I’m among the “lucky” Muslim passport-holders because at least I can obtain visas due to my prior travels and returns to the U.S. and Europe. The vast majority never obtain visas.

Q. What have been some surprisingly positive experiences and what has been negative?

A. All kids are fidgety–only parents can vouch for that. But when my kids are fidgety, adults have scolded them without first talking to me or acknowledging me as being their mother let alone their guardian. In one instance, after a blond woman had scolded my son, a white passenger congratulated her. “Good job- you put an end to that right now!” he said. “Otherwise he would have ruined your entire flight!.” By “that,” he was referring to my son who was pressing his foot against the seat in front of him, for the first time, to help him buckle up before take-off. 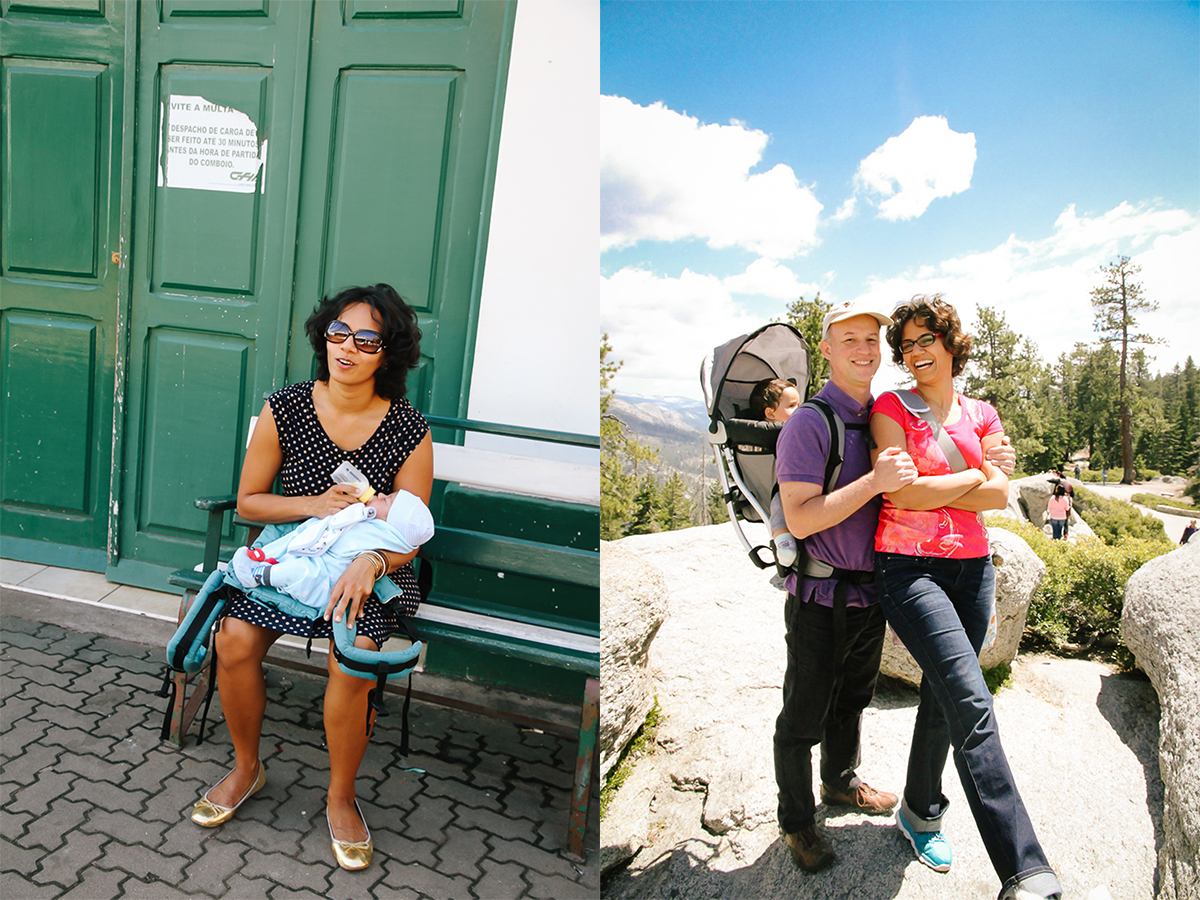 In another instance, the flight attendant roughly jolted me out of my half-sleep. I kid you not–he yanked my elbow off the armrest to tell my son to turn down the volume on his tablet. It turned out that it was someone else sitting behind. However, the white woman in front had complained: ‘This mother is clearly traveling out of her pueblo for the first time’.

Mothers, more than fathers, feel judged when their child is crying or having a difficult time in public.  The worst is when other passengers give you the “look” if they hear your child crying. It’s unimaginably worse when the mother happens to be a person of color. Their censorious looks are basically saying: “Crew, could you please help this woman off the plane right now, mid-air?… These people–so uncivilized! They can buy tickets but don’t know how to behave and bring along their noisy offspring. They have so many of them too!… Please do assist them off the plane–-they are disturbing my movie!”

I’ll leave you to imagine how this stresses out a parent, how a child feels the parent’s stress, and how that further aggravates them. It’s one thing for me to feel humiliated simply because of how I look. It’s entirely another thing to behave like that with my child because he’s colored and with a colored guardian. I’m the personification of “hell hath no fury…” But, guess what? If I speak up, I’m confirming their biases, bigotry, prejudice, and stereotypes.  So I just seethe and simmer until I start to cry.

A. First off, our race conversations come about naturally simply because of who we are, where we have lived, and through the diversity of places we are connected to, due to family. I have a Hispanic-American brother-in-law, a first-generation Iranian aunt, a first-generation Vietnamese sister-in-law, etc. Secondly, we make an active effort to talk to our kids about different places, cultures, and people, through books, movies, and celebrations. My son’s current role model is Jamaica’s Usain Bolt while my daughter draws pictures to send to  Malala Yousafzai, Pakistan’s literary star. We also use our own travelogues and photos to recreate images, retell stories, and create an appreciation and desire to know people and their stories. 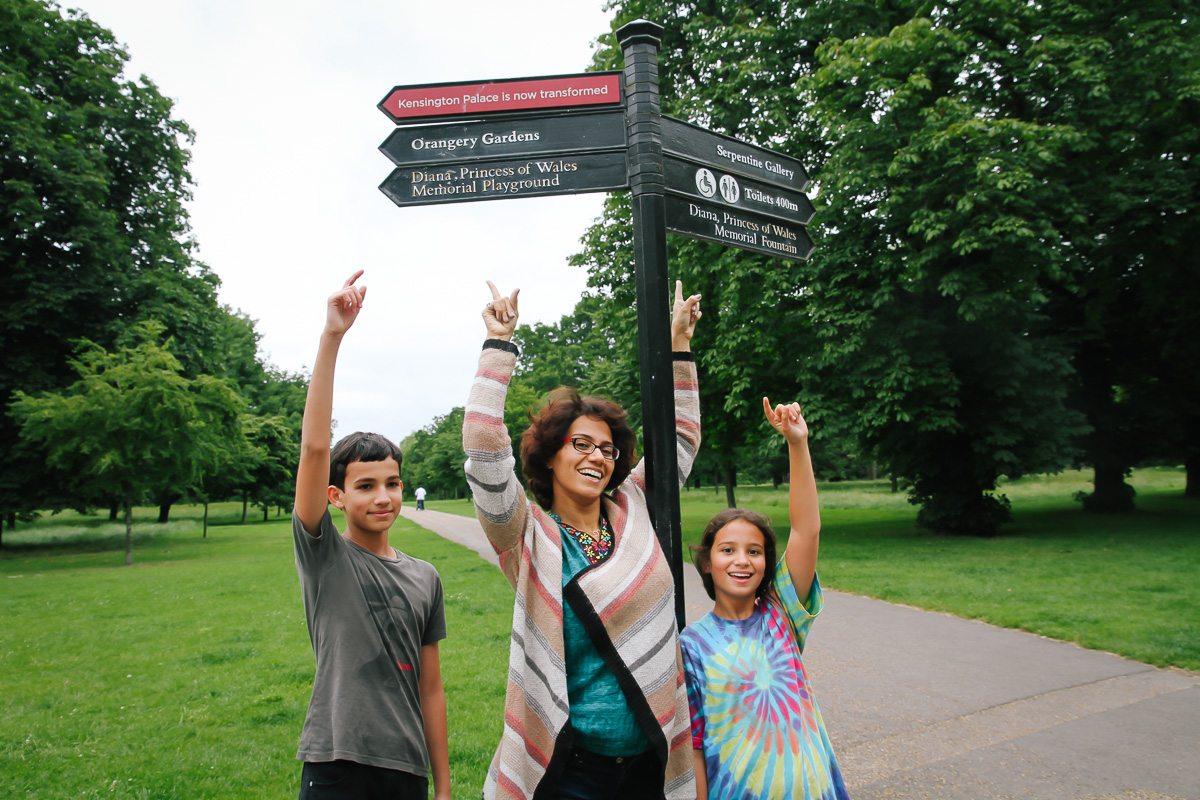 Thus far, our kids have luckily not been subjected to discriminatory treatment like mine because they travel on non-Pakistani passports. It has been scary for them though when traveling without my partner. They were suddenly left alone when I was once pulled behind a screen without them unable to explain to them what was going on. I couldn’t even reassure them that I would be right back. Surprisingly, my white partner was one time pulled out without any forewarning at the San Francisco airport while leaving the U.S. I was shell shocked and in utter panic.

Having been through these experiences, as a parent, a nomad, and an immigration specialist, I cannot even imagine the soul-shattering anguish, pain, and panic inflicted upon families who are separated at borders and immigration points due to countries’ political motives.

Q. With all the recent world events and the more open talk about racial injustice, do you think people will be traveling differently?

A. I think there’s definitely a possibility that will happen. However, this requires that privileged people (parents included) be aware of their entitlements accorded thanks to their nationalities, race,  and religion. Please observe, reflect, stop, reach out, and be allies. Travel for fellow travelers of color and on different passports is stressful, particularly if they are parents with under eight-year-olds. 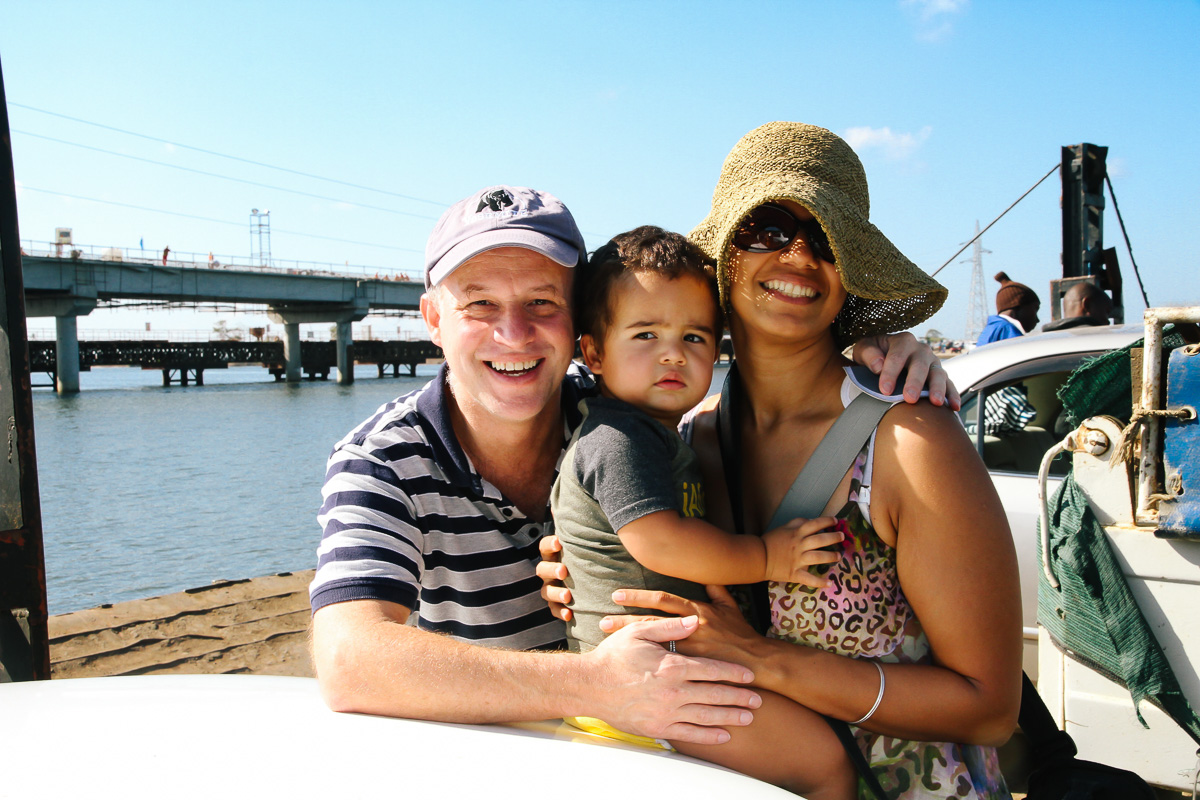 I’ve reached out to travel forums to share my experiences of traveling as a Muslim, brown, Pakistani woman, and mother, but have not even been graced with the courtesy of a rejection letter. That said, I believe, we who face discrimination should speak up more and not be afraid to draw attention to discrimination and violations of the law and human rights. It would be a historic moment if privileged parents would stand by discriminated families regardless of how long the flight has to wait.

Here at Bébé Voyage, we are trying to shine a light on the social injustices that everyday moms and dads encounter while traveling. If you would like to read articles similar to this one, check out our blog and don’t forget to leave a comment!

Traveling To Places With High Levels Of Poverty: How To Teach Our Kids About Economic Privilege

Marley (They/Them/Their) is the Editor-in-Chief for Bébé Voyage. Marley is an avid traveler, food lover and parent to one kiddo. They hold a BA in English Literature and a Diploma in Freelance and Feature Writing with the London School of Journalism. You can find out more about Marley at www.mconte.com
All Posts »
Become a member
PrevPreviousLost In Translation: Common Phrases From Around The World
NextGiant’s Causeway: A Legendary Unesco Site That Will Capture Your Child’s ImaginationNext