The Holiday Season in Astana Kazakhstan

Even though I grew up in the warm, southern United States, I’ve grown to eagerly anticipate and love cold, snowy winters. Especially those types of winters that look like story book perfection, with large puffy snowflakes tenderly kissing your cheek when you walk.  Living in northern Kazakhstan, about six hours from Russia can be like living in such a winter wonderland. The winters tend to be exceptionally cold and covered in a blanket of white snow that remains from around October until April. Instead of the typical foot or more of snow with persistent ice, this winter has been warmer with only a consistent dusting of snow and patches of ice making it much easier to get around on foot or even bike.

As a Sephardic family [Jewish and Spanish] living in Kazakhstan, a secular nation with a majority Muslim population, it’s fun to see colorful decorations throughout town and to enjoy the festive mood regardless of which holidays we celebrate at home. You can look around and see Christmas trees and wreaths in every mall and most stores and cafes too. There are large-scale decorations, such a HUGE illuminated snowman that is perfect for taking impromptu pictures.

Other fun areas around town that have recently opened this holiday include attractions at the site of the summer Expo 2017. While the Expo attracted more than 100 countries, now the area has been converted to a large pedestrian space with multiple playgrounds and an ice skating rink replete with music and colorful lighting for the evenings. The area also includes an art center and a large exhibition hall, in the shape of an enormous sculptural multi-story globe. The number of playgrounds are beyond any I’ve seen elsewhere, with a few for toddlers, a handful for young children, and multiple for older children. These include swings for each age, even with ones for older children and adults. One of the play areas for older children include a triangular, tall climbing, rope jungle gym with a lengthy tubular metal slide emerging from the top of it, a close to two-story climbing feature.

One weekend day, we celebrated the winter holidays by spending time at the Expo park area, the adjacent mall, and annual international, holiday charity bazaar. We biked from home together with our 2.5 year old bundled in snowsuit, boots, warm winter hat with helmet perched on top, Mongolian camel-fur mittens, and a hot water bottle tucked into a stuffed animal dog (can you find the dog in the picture?). She sat on the back of my red, step-thru bike which we had packed with us when we moved to Kazakhstan almost three years ago. Our 6 year old sat tucked in with blankets and snacks in a bike trailer pulled behind my husband’s bike. We arrived about 10am and passed by a few families ice-skating on the newly opened rink. At first I thought we would ice-skate too, but at about 10F degrees outside with no sun shining on the rink, I felt too cold to attempt the feat by myself, let alone with two young children! (So one day in the future then, we will try this again, perhaps one evening as the sun starts to set and the lights sparkle between pink, purple, green, and blue.)

Instead, we headed past the ice rink around to the first set of playgrounds. As the playground area extends over such an expansive area, around hills and past corners, we thought we were the only ones…until we walked and walked past multiple play areas and found another family enjoying an area we’d never even seen in the past, even though we’ve been to the Expo park area many, many times!

So off to the first playground we went, to a perfect combination for both our toddler and older child. They immediately started climbing, sliding and swinging.

From there, we tried the toddler playground, with slides reaching about a foot high, then running and playing on as many of the structures as possible before the cold started to seep past our warm winter clothes. After about an hour, we were ready for a warmer environment and biked to the large two-story mall, aptly named for its size, Mega. Once there, we found a cozy spot at one of the many coffee shops inside, Coffee Boom, a special location offering both a festive mood, wonderfully detailed latte-art for me (in the large “Boom” size), strong espresso for dad, and some filling fried foods for the kiddos. With bellies full and bodies warmed, we took a taxi across town to the annual international, holiday charity bazaar. As a car-free family like many other people in Astana, taxis are easily accessible and affordable (the ride across town took about 20 minutes and cost about $3). The bazaar filled an entire set of reception halls at the Radisson hotel, with stands from around the world, selling souvenirs and traditional foods. I got the chance to enjoy traditional Indian chai and watch a mehndi demonstration while our little loved the dolls at one of the Kazakhstan tables and the crocheted stuffed animals at the Iran table. These colorful crocheted animals won us over and two bunnies in white and green, plus a blue bear-type creature made their way home with us. 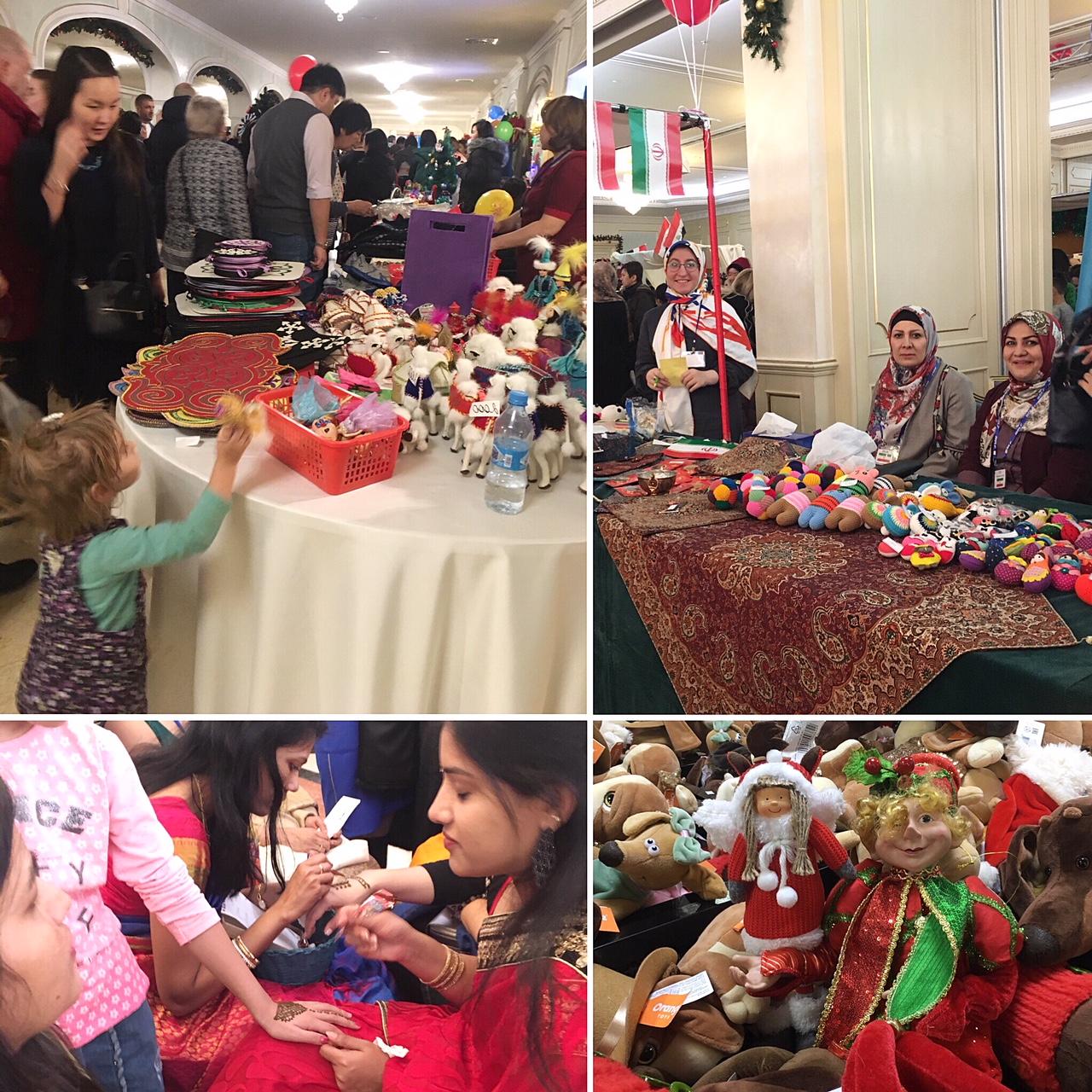 After a full day of biking, climbing, swinging, eating, drinking, and shopping, we hopped back in a taxi, watching the sun set as we looked out the windows. In one direction, we could see a multitude of large cranes and construction trucks working into the evening to complete their projects including building new buildings, restaurants, hotels, and more. In the other direction was a vast prairie covered with short grass, now brownish and speckled with snow, the extraordinary Kazakh steppe largely untouched by human hands. It is in these times, when there are a few quiet moments to gaze around my setting that I realize the magnitude of living abroad, the opportunity to learn about new cultures and languages, and to expose our children to such an incredible world.

Anna is a motherscholar living and working in Astana, Kazakhstan. She's an Assistant Professor within a Graduate School of Education, teaching early childhood education, how to conduct research, and working to promote diversity and access within education. She is also the founder of The Motherscholar Project (www.motherscholar.org).
All Posts »
Become a member
PrevPreviousHidden Gems: UNESCO Site in The Middle East
NextToddler Road Trip Music that Parents Enjoy TooNext

Anna is a motherscholar living and working in Astana, Kazakhstan. She's an Assistant Professor within a Graduate School of Education, teaching early childhood education, how to conduct research, and working to promote diversity and access within education. She is also the founder of The Motherscholar Project (www.motherscholar.org).