Top things to do in Brussels with kids

We discovered there are many things to do in Brussels with kids when we had to go there on business and extended our stay for a few days. The oversized Tintin rocket ship that greeted us at the airport was a sure indication that we wouldn’t have trouble filling our Brussels itinerary with kid-friendly activities.

A manageable city that is well connected to other European cities by train, plane and automobile, Brussels is definitely worth a visit, even if you don’t have to go there on business. 😉

Our hotel, the FunKey, had a complimentary breakfast which included yogurt, fruit, pastries, bread and a number of spreads including Nutella and speculoos (the local cinnamon cookie which they also turned into a delish toast topping).

The Museum of Original Figurines (MOOF), the Chocolate Museum and Train World were some of our favorite things to do in Brussels with kids.

The MOOF had a manageable exhibit of Belgian cartoon characters (there are more than you think!) that we got through in just under an hour. And when we finished, our kids literally said, “That was fun; what’s the next museum we’re going to?” 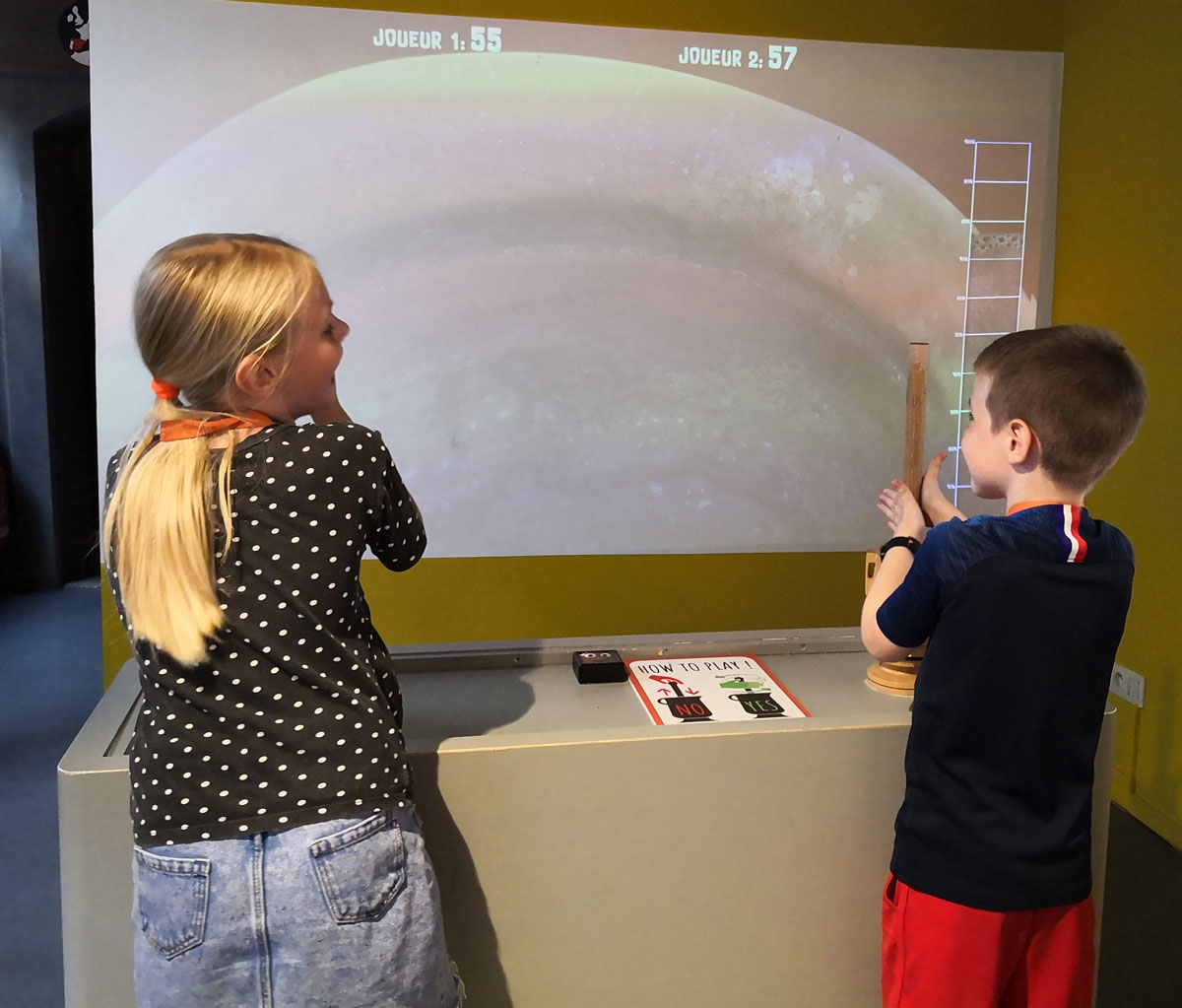 Luckily, the Choco-Story Chocolate Museum was only a few blocks away and so we quickly added it to our Brussels itinerary. The self directed audio guides allowed our kids to follow the parts of the exhibit they were interested in. Some of the exhibits were interactive and even included tastings… a big hit with everyone!

EXKi. It’s a great local chain which has expanded to France and beyond. The system of choosing your items directly from their display makes it easy to know what you’re getting and makes the service quick… Key when you have kids in tow. They bill themselves as healthy fast food, so they serve plenty of options for all kinds of diets including vegetarian/ vegan, gluten free, diabetic etc.

EXKi restaurants usually have ample seating areas that you can easily bring a stroller into. Most also offer high chairs and a microwave to heat your own food (or bottle) in. 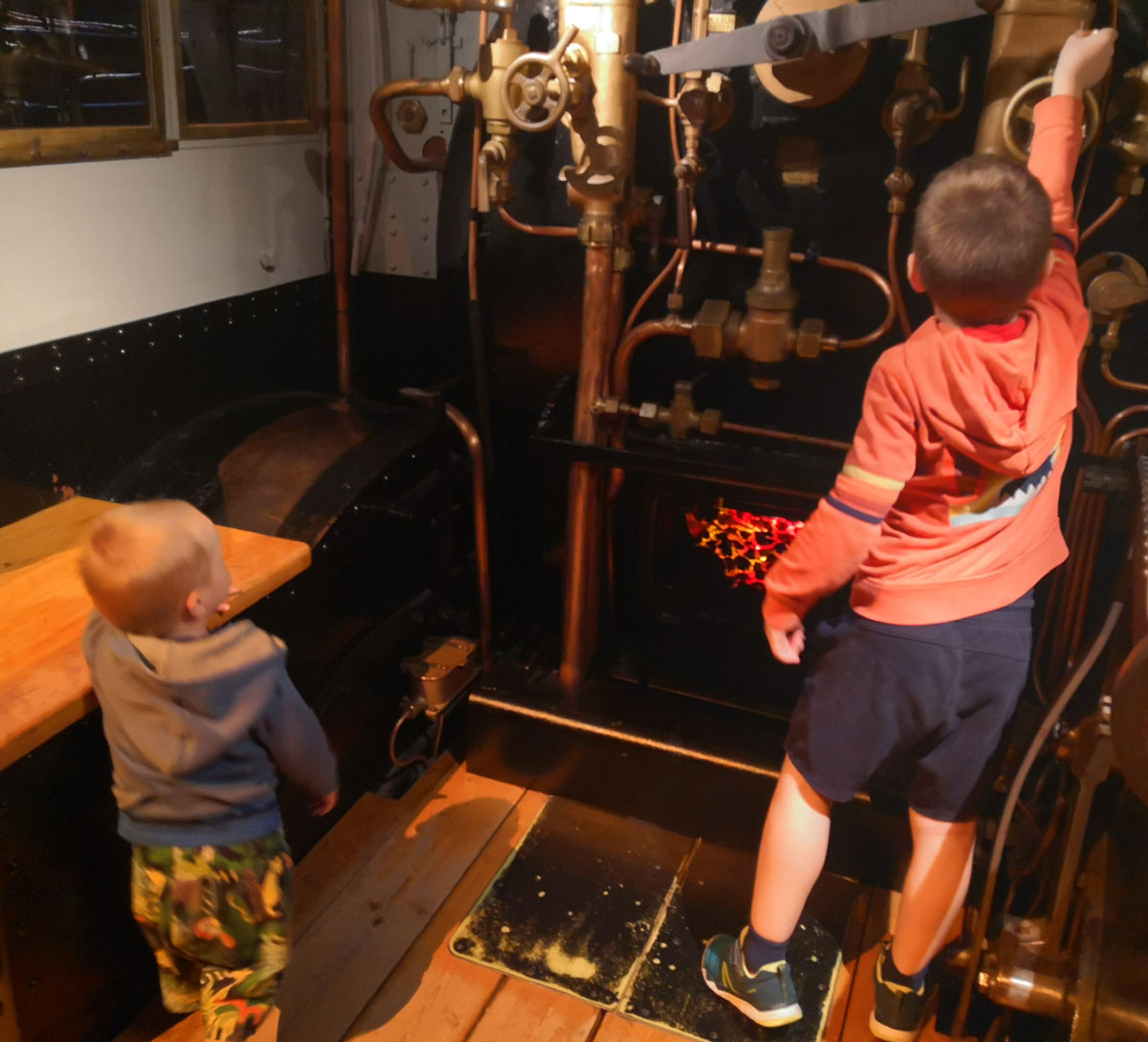 Train World should definitely be on everyone’s list of things to do in Brussels with kids… or without kids! It was truly impressive. In each hall, there were several locomotives or cars that visitors could climb into, including the Orient Express.

Our 8-year old also enjoyed the treasure hunt in search of the sultan’s lost diamond. It combines a paper questionnaire to fill out with videos and activities we had to access through their app. The app is available in English, French and Flemish/Dutch.

We spent a good two hours at Train World, but could have easily spent longer if we didn’t have more activities planned on our Brussels itinerary. 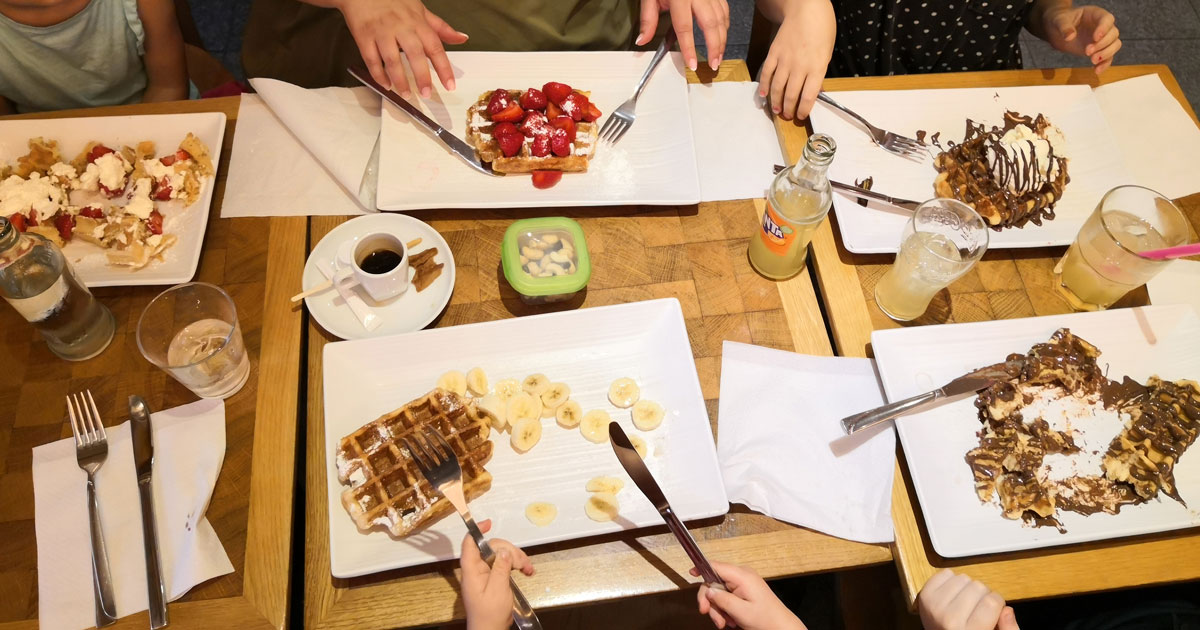 Brussels has many playgrounds and parks scattered around the city, ideal for letting kids burn off energy. The one place there aren’t parks or playgrounds nearby is in the historical center, so when we were there, we opted instead for gaufres (waffles).

We popped into a café that offered both gaufres de Bruxelles (fluffier and crispier) and gaufres de Liège (denser and sweeter) with a number of toppings. 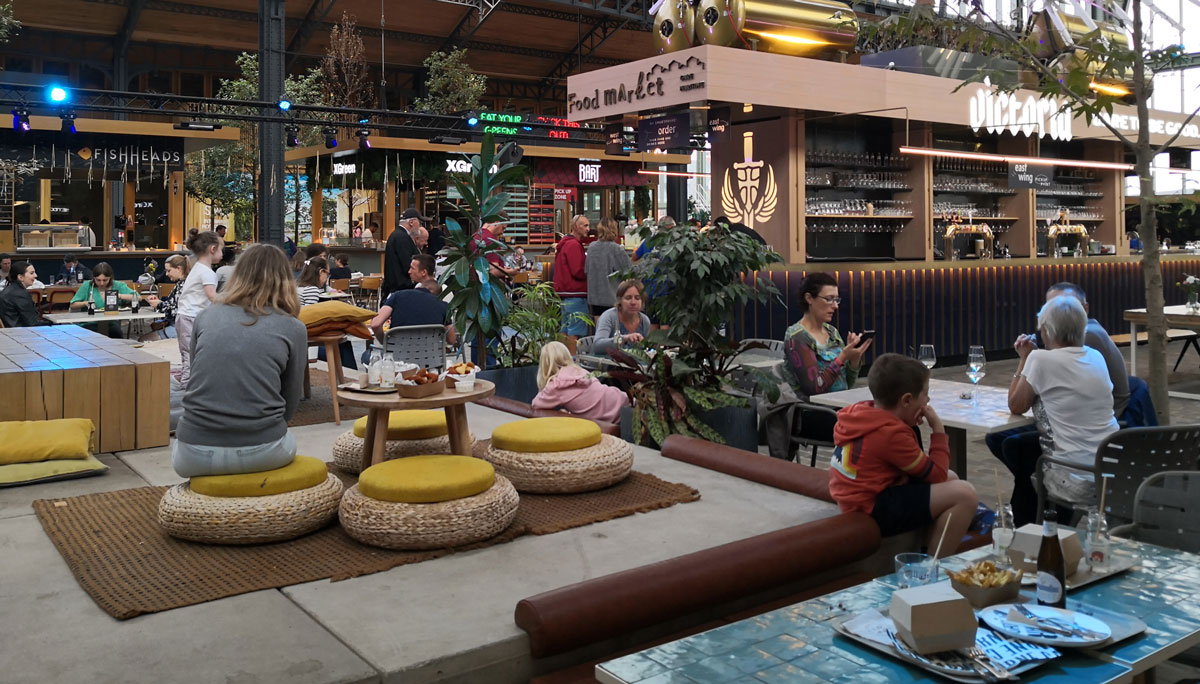 The Gare Maritime Food Market at Tour and Taxi. Basically a high end food court in a beautifully redesigned industrial space, you’ll definitely want to add this to your Brussels itinerary. There are 10 kitchens to choose from, each with its own specialties. If you can’t decide which one to order your meal from, get small plates from a few different stands!

Best of The Rest

Chocolate! If you’re like us, sampling Belgian chocolate is one of the best things to do in Brussels with kids. We popped into Neuhaus because we were lured in by the Smurf chocolate tin, but Leonidas is also a sure bet.

During our stay, the Frida Kahlo immersive experience was happening, so we added it to our Brussels itinerary. It included a large fully immersive space much like the immersive Van Gogh experience as well as a smaller more psychedelic room in which the kids went crazy.

Pro tip: The Brussels Card includes public transit, the MOOF, the Chocolate Museum and the Train Museum, so if those are on your list of things to do in Brussels with kids, you’ll definitely amortize your card.

Bébé Voyage tip: The Brussels buses and trams are fully stroller accessible, making it a great city to explore with babies and toddlers too!

Thank you to Visit Brussels for the complimentary Brussels Cards. This is no way influenced our opinion of the places we visited or ate at.

Four Days in Paris with Kids

(she/her/hers) Marianne is Bébé Voyage's co-founder and CEO. Born with 3 passports and with friends and family around the world, it's not surprising that she's always been a traveler. And it didn't stop when she had kids. Her first son was born in Stockholm, Sweden. At 6-weeks he flew to Paris to visit family, before moving to Mozambique a week later. That's how Bébé Voyage started...
All Posts »
Become a member
PrevPreviousHotel Review: Hilton Bonn Germany
NextGreece with kids: Top tips for exploring the CycladesNext