We were flying with American Airlines from Chicago ORD direct to Montego Bay, Jamaica on Thursday, February 28th. Our daughter was 14 months old, so we reluctantly booked only two seats, intending for her to be on our lap for the (relatively quick) four hour flight. We actually had a horrible experience leading up to the flight. I had booked my daughter as a lap child through a travel service. I called American a few weeks ahead to confirm that she was on the reservation. I did that two times where they promised that she was registered, I would only have to pay for her taxes and fees at the airport when we arrived. We had also preemptively purchased premium seats, so we had a little more leg space to entertain our active toddler!

When we arrived at the airport it was a disaster. It was around 6AM, we were running late, they didn’t have Asya on the reservation, they were having trouble adding her, and they didn’t honor our paid seat assignments. Instead, they informed us that they would refund the money and the only seats that they had together were the last row. Additionally, both my daughter and I have TSA Pre, which hadn’t been applied to our ticket (even though I added our known traveler number weeks in advance). All in all, by the time we made it to the gate, it was last call before closing the doors. 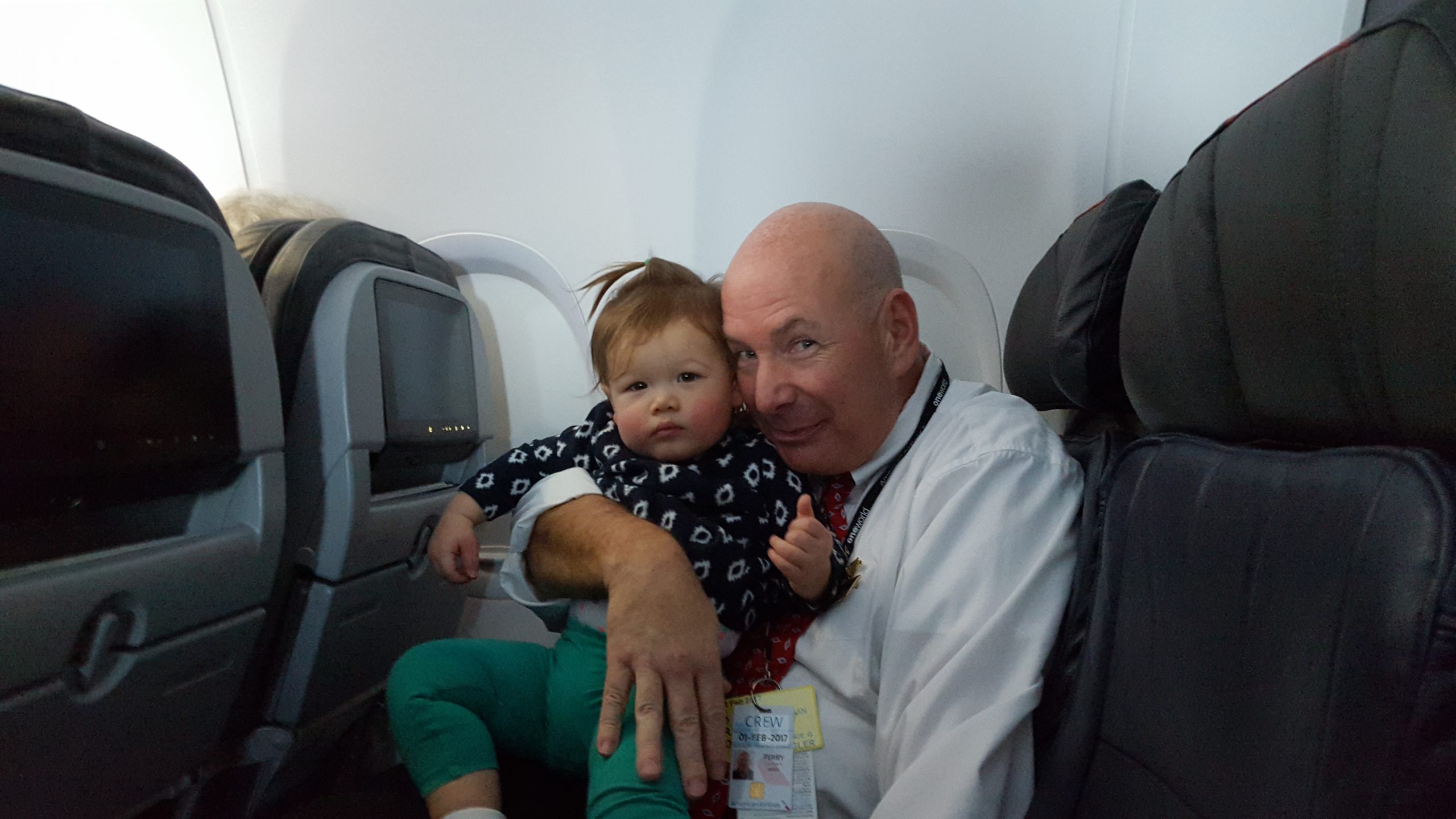 Discombobulated, we made our way to the back of the plane. This is where we were met by Terry. Actually, he told us to call him “Uncle Terry”. He immediately began gushing over Asya and with much fanfare, he presented us with an entirely empty row so Asya could have her own seat. Once we were all settled, as they were preparing the plane for takeoff, Uncle Terry came over to talk to Asya. She loved him and when he reached out for a hug, she went right to him. From that point on, any free moment Terry had, he was holding Asya. He took her back so she could meet the other flight attendants. Once in air, Terry was carrying Asya up and down the aisle, answering calls for other travelers with Asya on his hip. She has serious stranger anxiety so we were worried she’d cry, but when my husband tried to take her back from Terry (so we weren’t taking advantage of his help!), Asya cried hysterically until Uncle Terry took her back. Of course Terry LOVED that, so she sat across the aisle in the row reserved for the crew. He loved her, started taking selfies, so then of course I had to join in and snap a photo of the two of them. This was one of the best flight experiences we’ve had traveling with our daughter, and we’ve had quite a few so far (we’ve flown all over the US, and two long haul flights to Turkey and Croatia, since she arrived a year ago!).

As a parent, when flying with a child, my husband and I don’t expect special treatment or consideration, we just want a little patience from airline personnel and other passengers. We received so much more with Terry. He made our experience so special. His attention made it so not only were my husband and I comfortable, but the passengers around us were also enjoying a nice quiet, peaceful environment with the dreaded toddler on the flight happily occupied. It also set the tone for us to start our holiday in the sun happy and relaxed!

All Posts »
Become a member
PrevPreviousMy Four Big Travel With Baby Mistakes – Don’t Let This Happen To You
NextAlex: On Getting Baby to Eat Everything and Handling Baby Jetlag in ParisNext