Many of us love being out in nature. There is something calming and peaceful being amongst the trees, hearing the wind rustling through the leaves and listening to the birds. It might sound corny, but it really can soothe the soul. Despite our daily problems, being able to disconnect from life, even if it’s just for an hour, can make a world of difference. Many of us head to a forested area when taking hikes or wanting to get out into nature. And it’s easy to understand why; over a third of the world’s land surface is covered in forests! Have you ever thought about what would happen though if forests suddenly disappeared? We wouldn’t just lose our mental outlet…we would lose everything. That is why for the 2021 World Wildlife Day the official theme is “Forests and Livelihoods: Sustaining People and Planet”.

Did you know that a quarter of our modern day medicines are actually derived from forests? Aspirin was originally made from different shrubs and trees that contained salicylic acid. Can you imagine not having aspirin for aches and pains!? And many of our cancer fighting drugs, which save thousands of lives each year, come from plants within the forest. Or how about the fact that 1.5 billion people rely on forests for their livelihoods? In addition, approximately 200 million people around the world live in or near forests and rely on them directly to survive. Forests hold the key to so many amazing and beautiful things, and it is imperative that we protect them at all costs.

But what about the plants and animals that call the forest home? Many of us probably couldn’t tell the difference between a bear track and a large dog who was out for a jog with his owner. Knowing about the animals that live around us though is part of protecting them and their habitats. If we want to protect the forests we need to know about them first! So in light of World Wildlife Day here are 5 amazing facts you probably didn’t know about forests and the flora and fauna that inhabit them!

It’s not just insects and sea creatures that can glow in the dark. There are actually glowing plants and fungi in many forests around the world. One such place is in Borneo where the glowing mushrooms will make you feel as if you are in another world entirely! Up to 80 different types of fungi can glow and scientists have finally found that they do so in order to attract insects that will help spread its spores. So, next time you are out hiking at night, turn off that flashlight and take a moment to look around. You may just find nature’s flashlight!

Bonus Fact: Did you know that humans are actually bioluminescent? It’s not visible to the naked eye, but it can be seen through a photon camera. Scientists believe this is actually a side-effect of our metabolisms!

Want to take the kids to see bioluminescence on your next vacation to Florida? Check out this BBV article!

Move over Rudolph! Real reindeers don’t need a glowing nose, they just need blue eyes! Reindeers live in a variety of places (North Americans know them as caribou!), but they always live in the colder arctic climates. Reindeers have learned to adapt to the harsh winters by changing their eye color to accommodate for the low levels of light in the winter. Their hooves also harden in the winter to make it easier for them to break through ice and frozen tundra.

Bonus fact: Did you know that Santa’s reindeers are actually females? Males shed their antlers in November, while the females actually keep their antlers through the winter and do not drop them until spring!

Grizzlies always seem to get a bad rap, but they are actually the smallest of all the brown bears! They are only found in the interior parts of small areas of North America, such as Yellowstone. They usually forage for berries or eat different grasses and plants. Believe it or not, their diet is mainly vegetarian. They do eat meat such as fish and rodents or injured animals, however they tend to be smaller than other brown bear species as they do not get as much protein. They also have a “grizzled” look to them which is due to the lighter tips at the end of their fur. Brown bears meanwhile live in the coastal areas such as along Alaska’s coast. Due to their extremely high fat diet of salmon, they are actually larger than their interior grizzly relatives. Regardless of size however, if you see one, be sure to steer clear! They can be extremely aggressive if they feel threatened or are hungry.

Bonus fact: Kodiak bears are a subspecies of the brown bear that have lived isolated on the Kodiak islands of Alaska for close to 12,000 years. They can stand up to 10 feet tall when on their hind legs and are comparable to Polar bears in size. In fact, there is a debate as to whether Polar bears or Kodiak brown bears are actually larger!

A Tiger’s Skin Is Striped

Yep, that’s right! It’s not just the tiger’s fur that has stripes! One of the most recognizable animals in the kingdom would still be easily recognized even if the tiger got a massive haircut! Their stripes are also just like a human’s fingerprints. No two tigers have the same pattern which makes it easier for scientists to identify and study them.

Bonus fact: Tigers can eat up to 88 pounds of meat in one sitting! 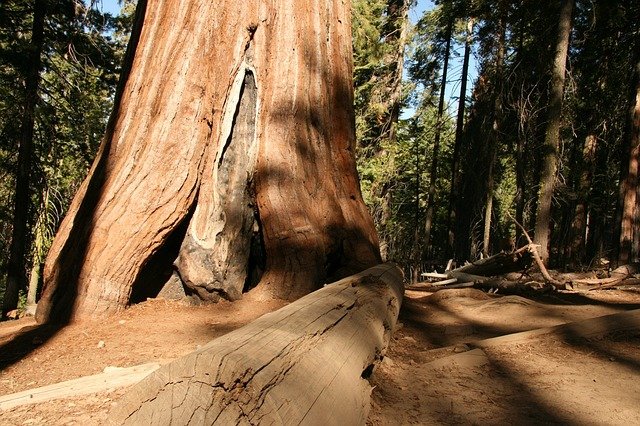 Those were some amazing animal facts, but we certainly couldn’t leave forests off this list considering the World Wildlife Day is all about forests this year! Trees are the oldest living organisms on Earth and can grow to skyscraper heights. The largest and oldest of which is the Sierra Redwood. They can reach up to 300 feet tall and have a diameter of 30 feet wide. Despite their size their root system is very shallow and they actually “hold hands” with each other! Their roots intertwine in order to keep them stable in the forests.

While redwoods are awe-inspiring they also are extremely important in keeping our air clean. They are able to take in more C02 than any other tree in the world.

Bonus Fact: If you were dropped in the middle of a large forest with a dense canopy, would you be able to find your way out? Well, look to the trees! They can help point you in the right direction. Moss will usually grow on the shadier side of the tree which can help you get your bearings. So, in the northern hemisphere moss will grow on the north side and vice versa for the southern hemisphere!

Check out the links below for some cool animal quizzes and kids coloring pages from the World Wildlife Day website! (or adult coloring pages…we won’t judge!) (She/Her) Kelly is the Director of Content for Bébé Voyage and enjoys traveling the world with her husband and two boys. A self-described travel junkie, she prefers to visit the "real" parts of a destination, rather than the more popular touristy areas. Always on the hunt for local restaurants and off the beaten path shops that most tourists never find.
All Posts »
Become a member
PrevPreviousHow to be an Active Ally with the Asian American and Pacific Islander Community
NextIs Taking Paternity Leave Bad For Your Career?Next